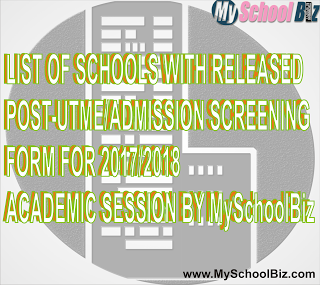 THE hope of many students seeking admission into Nigerian universities may be dashed if the admission screening in 2017 is based on students’ WASSCE results and Unified Tertiary Matriculation Examination (UTME) scores.  Recall that in 2016, the Minister of Education, Mallam Adamu Adamu, abolished post-UTME as a means of admitting candidates into tertiary institutions.

Meanwhile, in 2017, over one million, eight hundred thousand (1,800,000) students sat for UTME, for a total of 800,000 admission spaces in tertiary institutions. Going by the huge number of candidates and limited admission spaces, various institutions have since 2016, resolved to admit students by screening and awarding marks to their WASSCE results and JAMB scores.

Thus, for an institution to select the best students from the multitude, instead of conducting post-UTME as was the case previously, all that is needed now is to grade candidates’ O’Level results and score them over 40 per cent. The breakdown shows that when a candidate submits his/her O’Level result for screening, five O’Level subjects relating to his proposed programme of study will be examined and marks awarded based on what he scored in WASSCE.

For a student with five C6s in WASSCE, and between 190 and 199 in UTME, the chances of securing admission in public institutions is dicey because he has only scored 15 per cent in WASSCE and 20 per cent in UTME. His total percentage score is 35 per cent. With this system, it means that students aspiring to secure admission into Nigerian public universities  must study hard and be academically sound to obtain A or B grades in WASSCE to stand a chance.

The initiators of this innovation believe it will propel students to aim high so as to obtain A1 in five subjects. Also, the issue of paying for post-UTME and travelling long distances for the examination would be a thing of the past.

Meanwhile, as good as it appears on the surface, many stakeholders who spoke with Vanguard disagreed, noting that the development will breed and promote examination racketeering in secondary schools and examination bodies. They argued that some students and parents could go to any length to obtain the five A1s in order to guarantee their admission.

Unfortunately, many times, students with C5 and C6 in their WASSCE results may prove to be better academically than those with A1 because they read and wrote the examination themselves, hence the results represent true reflections of their academic abilities. It has also been noticed that many students with A1s in their WASSCE cannot defend such results because the exams were probably written for them.

Besides, where there is no proper monitoring from relevant examination authorities, tertiary institutions can engage in sale of admission to the highest bidders so the posibility of children of the poor securing admission will be slim. There had been reports from students about how their names were once pasted on admission notice boards, but replaced by other students’ names; a situation such school authorities could not defend when contacted.

Reacting to the scrapping of Post-UTME and using WASSCE result as yardstick for admission, Olamide Azeez, a 100-Level student of Yabatech said post-UTME gives institutions the privilege of knowing the type of students they want to admit. He added that post-UTME helped students to prepare more academically before they enter the university.

Also reacting, Miss Damilola Adeleke, a final year student of  Biology, Yabatech said: “The scrapping of post-UTME does not favour everybody. Post-UTME helped students to boost their chances of  securing admission into universities.”

On his part, Mr. Akinbiyi Folorunsho from the Department of Mathematics of the institution said: ”Without post-UTME, there will be high rate of examination malpractice in secondary schools. Post-UTME is preferable because it will be 50-50 admission chances for every seeker.”

Adeyinka Adebayo, an undergraduate at Laspotech said he supports post-UTME, adding that there will be high rate of unadmitted students without post-UTME.

“If care is not taken, the situation will lead to admission backlog, because many students will keep doing JAMB every year without hope of getting admission.”

Our Enemies Are Stockpiling Arms To Attack Igbos — IPOB

6,000 PDP Delegates For Next Month’s Convention

We need to be fair for peace to reign – Osinbajo