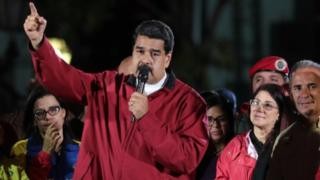 The US government has branded Venezuela’s President Nicolás Maduro “a dictator” and frozen any US assets, after he held a controversial poll to elect a constituent assembly.

Under the sanctions, US firms and individuals are banned from doing business with Mr Maduro.

The election on Sunday was marred by violence, with widespread protests and at least 10 people killed.

President Maduro hailed the poll as a “vote for the revolution”.

Venezuela’s new constituent assembly will have the power to rewrite the constitution and disband the opposition-controlled National Assembly.

The opposition coalition, which boycotted the election, said 88% of voters had abstained. It has refused to recognise the election. Electoral officials said the turnout was 41.5%.

Protesters have blocked a number of roads in the capital, Caracas.

A march scheduled for later on Monday to honour those killed on polling day appears to have been postponed until Wednesday, the day that the constituent assembly is due to meet.

Venezuela’s attorney general, Luisa Ortega, a vocal critic of the Maduro government, called the vote an expression of “dictatorial ambition”.

The US had previously warned that it would not recognise the election, with President Donald Trump vowing “strong and swift economic actions” if it went ahead.

The sanctions were announced in a statement by US Treasury Secretary Steven Mnuchin.

“Yesterday’s illegitimate elections confirm that Maduro is a dictator who disregards the will of the Venezuelan people,” he said.

“By sanctioning Maduro, the United States makes clear our opposition to the policies of his regime and our support for the people of Venezuela who seek to return their country to a full and prosperous democracy.”

Mr Maduro is only the fourth foreign leader to be blacklisted in this way, Mr Mnuchin said.

On 26 July, the US Treasury had imposed sanctions on 13 current and former Venezuelan officials in a bid to deter Mr Maduro from holding the poll.

Those targeted include the interior minister and the head of the army.

“Who do these imperialists in the United States think they are?” Mr Maduro said in response to these sanctions. “The government of the world?”

He called the sanctions “illegal, insolent and unprecedented”.

International condemnation of the latest vote was widespread on Monday. The EU expressed “preoccupation for the fate of democracy in Venezuela”, and said it doubted it could accept the results.

However, Russia, Cuba, Nicaragua and Bolivia have stood by Mr Maduro.

Venezuela’s 30 million citizens are suffering through shortages of basic goods and medicines, as the country’s weakened economy declines still further.

A wave of anti-government protests has left more than 120 people dead in four months.

So far, Washington has not imposed restrictions on the country’s huge oil exports to the US.

Mr Mnuchin would not confirm whether oil sanctions were being considered, but said President Trump had decided not to take measures that would hurt the “Venezuelan people” rather than Mr Maduro’s allies.

The Treasury secretary also urged those elected to the 545-member Constituent Assembly not to take their seats.

Last week, he warned that those elected could be subject to US sanctions for “undermining democratic processes and institutions in Venezuela”.