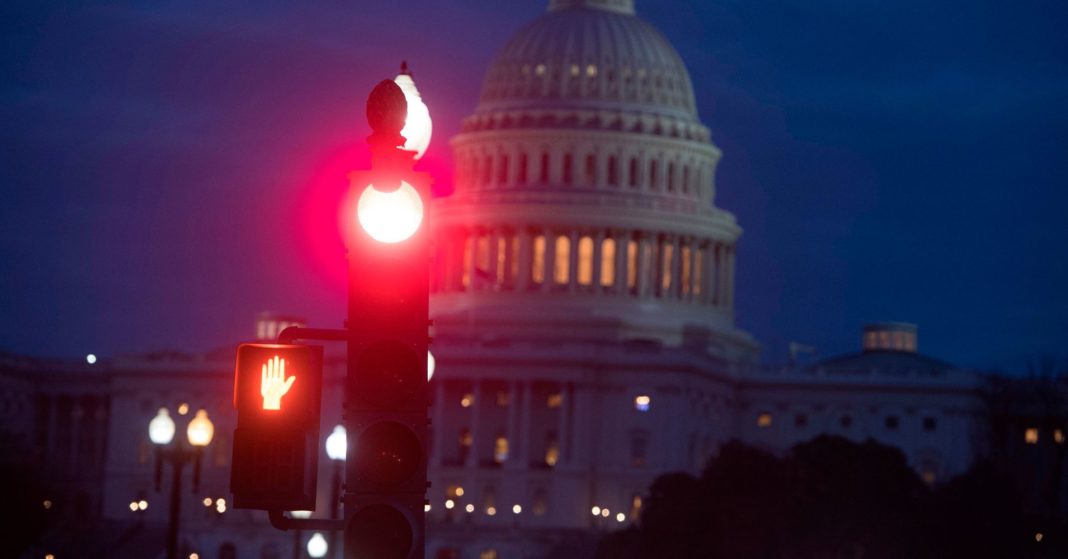 President Donald Trump threatened a government shutdown for weeks. He got one when the clock turned to Saturday.

Congress missed a midnight deadline to fund nine departments, or about a quarter of the government. Parts of the government closed after Congress adjourned earlier Friday night without striking a deal on seven spending bills.

Lawmakers failed to reach a funding agreement as Trump demanded $5 billion for his proposed wall along the border with Mexico. Democrats refused. Then House Republicans dug in, declining to pass a bill to keep the government running into February after the president threatened to veto it Thursday.

A rush to dodge a shutdown Friday afternoon and night yielded few results. Both the House and Senate are set to convene again on Saturday as lawmakers try to break the impasse.

The political fight will affect hundreds of thousands of Americans, potentially over Christmas and into the new year. More than 420,000 federal workers are projected to work temporarily without pay. About another 380,000 government employees are expected to face furloughs.

White House officials and congressional leaders held spending talks Friday night, even after the House and Senate adjourned at about 7 and 8 p.m. ET, respectively. A quick resolution appeared unlikely throughout the day, and Democrats showed no signs of caving early Saturday.

In a joint statement, Senate Minority Leader Chuck Schumer and House Minority Leader Nancy Pelosi said Trump “threw a temper tantrum and convinced House Republicans to push our nation into a destructive Trump shutdown in the middle of the holiday season.” They appeared prepared for the closure to last past Jan. 3, which is when Democrats will take control of the House and Pelosi will likely become speaker.

“Democrats have offered Republicans multiple proposals to keep the government open, including one that already passed the Senate unanimously, and all of which include funding for strong, sensible, and effective border security — not the president’s ineffective and expensive wall,” they said. “If President Trump and Republicans choose to continue this Trump Shutdown, the new House Democratic majority will swiftly pass legislation to re-open government in January.”

Trump has repeatedly threatened to close parts of the government as he failed to secure money for the barrier. The president had guaranteed his wall, a frequently repeated campaign promise that drew chants of support during his rallies. would be paid for by Mexico. America’s southern neighbor rebuffed him, however, so he’s turned to government funding.

Last week, Trump said he would be “proud” to shut down the government for border security. During a televised Oval Office fracas, he told Schumer: “I will take the mantle. I will be the one to shut it down. I’m not going to blame you for it.”

Despite his assurance that he would own the closures, Trump tried to blame Democrats Friday. In a video posted to Twitter late Friday night, he said “there’s nothing we can do” about the shutdown “because we need the Democrats to give us their votes.”

“The shutdown hopefully will not last long,” he said, reiterating his call for a “great barrier” in the form of “a wall or a slat fence or whatever you want to call it.”

In a memo to agencies Friday, Office of Management and Budget Director Mick Mulvaney wrote that “agencies should now execute plans for an orderly shutdown due to the absence of appropriations.” He noted that “we are hopeful that this lapse in appropriations will be of short duration.”

Lawmakers already funded the sprawling Defense and Health and Human Services departments, among others. The unfunded departments include Homeland Security, Justice and State.

It will likely take at least into Sunday to end the third government shutdown of the year. Congressional leaders were expected to give members at least 24 hours of notice before a vote.

Both the Senate and House passed spending bills this week, but the chambers could not agree on one they both wanted to pass. On Wednesday, the Senate approved a short-term measure to fund the government through Feb. 8, without wall money. Numerous members left Washington, thinking the House would pass it.

Then on Thursday, Republican leaders could not convince members that Trump would back the measure as hardline conservatives urged him to veto it. The GOP then added more than $5 billion in wall money, as well as disaster relief funds, to the short-term bill. It passed the House, but was dead on arrival in the Senate on Friday.

It is unclear what could pass both chambers of Congress now. The Senate advanced the House-passed bill to the floor Friday, with the goal of using the legislation to adopt whatever deal congressional leaders can reach with the White House.

Schumer has offered the Trump administration three potential solutions. He has proposed the bill the Senate passed Wednesday. The other two options Democrats floated are six spending bills and along with a continuing resolution for the Department of Homeland Security, or seven continuing resolutions for the remaining unfunded departments.

Senators from both parties had also discussed a potential deal to put $1.6 billion toward border security and fencing — but not a wall as Trump describes it. It was not immediately clear how seriously they were considering that solution.