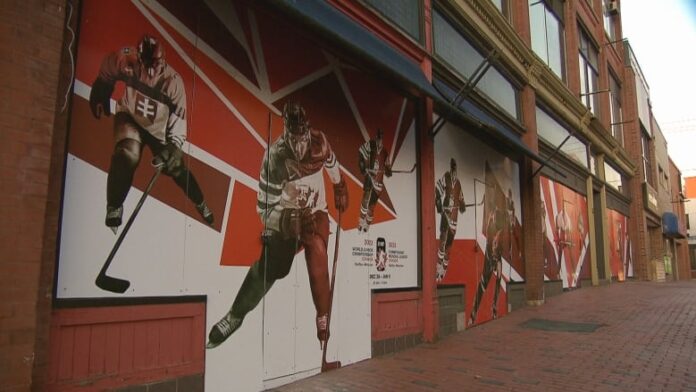 New Brunswick will spend $1.25 million to co-host the 2023 world junior men’s hockey championship, which begins in Moncton and Halifax on Dec. 26.

But Hockey Canada may have to repay some of that money if any Hockey Canada representatives involved with the event are found to have engaged in “unethical” or “illegal” conduct before the tournament ends on Jan. 5.

That’s according to a contract the New Brunswick government signed earlier this month with Hockey Canada, an organization that’s been under fire for months for the way it’s handled allegations of sexual assault.

Earlier this year, top Hockey Canada executives told a House of Commons committee that the organization has paid out $8.9 million in sexual abuse settlements since 1989.

Halifax Regional Police are investigating allegations that some members of the 2003 team were involved in a group sexual assault during that tournament, which was held in Halifax.

The contract, drafted by the province’s Regional Development Corporation, says the government can “demand that all of the unused portion of the funding be reimbursed” if unethical or illegal conduct occurs.

It doesn’t define what the government considers to be good character or unethical conduct.

The contract also requires Hockey Canada participants, including staff, volunteers, athletes and coaches, to take “mandatory sexual violence and consent training” and for the organization to assign a “special event team lead” who will be responsible for making sure the training is completed and “for supervision of players, coaches and staff for the duration of the tournament.”

“What we wanted to see and what our intention is in that contract is that everyone involved with Team Canada, from coaches to players to volunteers, that everyone undergoes this enhanced sexual violence training,” said Tammy Scott-Wallace, the minister responsible for both tourism and women’s equality in New Brunswick.

“And in that training, [it] very much spells out good behaviour, acceptable behaviour, what respect means, what no means, and general good character.”

Scott-Wallace said the province was excited to host the tournament, but soon after Moncton and Halifax were named co-hosts, “the news was incredibly unpleasant around the world juniors and Hockey Canada.”

She said she never felt New Brunswick should not host the tournament but instead sees it as an opportunity to send a message about sexual violence.

“I just want there to be no misunderstanding,” Scott-Wallace said. “There is no excuse and there is no exception when it comes to inappropriate behaviour towards women, and that is really the message I hope that they hear.”

The province has also launched a sexual violence public education campaign to coincide with the tournament. One ad shared with CBC News, designed to be distributed on platforms such as TikTok, says, “The only place for a power play is on the ice.” It goes on to say that sexual violence is never OK, “no matter what team you play on.”

“If we were going to host and welcome the world to our province and most certainly showcase the very best that we have to offer, we really had to be very honest as well about not hiding the reality of the situation happening, and to really take an opportunity to send a message that I felt was very, very important,” Scott-Wallace said.

Richard McLaren teaches law at Western University in Ontario and is an expert in safe sport in Canada.

He said a clause requiring “good character” is unusual for a funding contract.

“Normally a funder would expect the sport to carry on its standard programs, which would cover all of those topics and therefore there would be no need to put it in the funding contract,” the lawyer said.

“But because they’re concerned about spillover effect and tarnishing their own reputation, they’ve put in these clauses, but the clauses are very wide sweeping in terms of obligations of Hockey Canada.”

The “good character” clause does not appear in the agreement Hockey Canada signed with Edmonton to host last year’s tournament, which was cancelled because of COVID-19.

It also doesn’t appear in copies of contracts signed by the City of Moncton, which will spend $750,000 as a co-host of the 2023 event, or the Nova Scotia government, which is putting in $2 million.

The Halifax Regional Municipality, which will spend $1 million, did not provide a copy of its contract to CBC.

Moshe Lander, a sports economist at Concordia University, sees the requirement for “good character” as ticking a box more than a step toward prevention.

“[It’s] to cover themselves,” Lander said, referring to the New Brunswick government. “It’s purely to say that if something goes wrong, they could say, ‘Well, we insisted that there should be good people coming here.'”

In a statement, Hockey Canada says all of its players, coaches and staff passed what it described as an “enhanced character screening process,” signed off on two codes of conduct and completed the sexual violence and consent training prior to its selection camp.

Every team in the tournament will also have to complete “additional ethics training with the International Ice Hockey Federation.”

Security at the event will include “enhanced team rules and increased supervision of players, coaches and staff,” including a “comprehensive off-ice supervision plan” and “a zero-tolerance policy for acts of harassment, discrimination, racism and sexual violence,” the organization says.