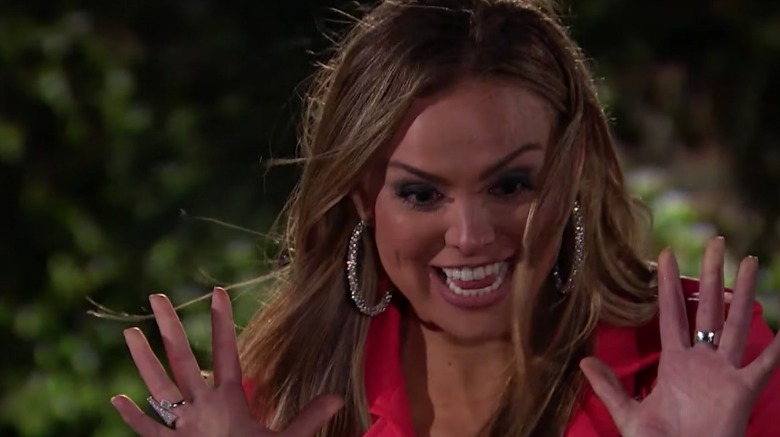 The Bachelorette‘s Hannah Brown is down to her final four — Luke P., Tyler C., Peter, and Jed — and on July 15, 2019, they were all in Greece to see if the sparks flew in the Fantasy Suites. “I really could see myself being ready for an engagement with any of the four men here,” Hannah said (via People). “It has been a long time since I have been physical at all with a man. But Fantasy Suite week is not about sex. It’s to have the time and a real, raw way without cameras to see where my feelings are truly, and find out who I want to be with for the rest of my life.”

However, according to Hannah, she and Peter had sex in a particularly memorable piece of sustainable energy equipment. “I didn’t just go into the Fantasy Suite — I f****d in a windmill. And guess what? We did it a second time,” she told the camera (via The Hollywood Reporter).

Many expected audience favorite, Tyler C., to have the same luck. “I’m ready to propose and get down on one knee and be her man,” he told cameras (via People). But it wasn’t meant to be for the 26-year-old contractor. “I don’t want to go into the Fantasy Suite and have sex, because I don’t feel like that’s what our relationship needs,” Hannah told Tyler. “It would be very easy for me to want to do that. I think we have to explore just being together and continue our emotional connection and have that time. That’s what we need in a Fantasy Suite.”

Controversial frontrunner Luke P. appeared to be a shoe-in for some romance in the Fantasy Suites, but things took a turn when he shamed her for sexual escapades. Luke, the Christian who claims he’s been abstinent for four years and plans to wait until marriage to have sex again, told Hannah they should be “on the same page.” He continued, “Like if you told me you’re going to have sex or you had sex with one or multiple of these guys I would be wanting to go home 100 percent.”

Obviously, that didn’t sit well with Hannah. “Some of the things you said, I don’t agree with at all,” she replied. “And honestly, like I’m like kind of mad because like the way that you just said that is like, why do you have the right to do that because you’re not my husband and you’re not … it’s just that you’re questioning me and you’re judging me and feel like you have the right to when you don’t at this point.” Then, after referring to Hannah’s sexual past as “slip-up” he could forgive, Luke punched his ticket home. “There have been so many times that I have wanted to say I am done with you, but my heart has just not allowed me to let you go,” Hannah replied. “And I prayed so much for clarity and I feel like I have finally gotten clarity on you. And I do not want you to be my husband.” As Luke drove away, Hannah flipped him off. “I answer to the Lord, I don’t answer to Luke,” Hannah told the cameras. “I’m just relieved I never have to deal with him again.”

As expected, the Twitterverse couldn’t stop tweeting about the drama:

“Hannah: “Tyler, I’m not sure if I want to go in this fantasy suite with you where no one can see us.” Most Women in America: “Give me two minutes with Tyler in a clear phone booth,” former The Bachelorette contestant Diggy Moreland tweeted.

“My fantasy suite with Jed would involve me slowly lowering blinds in front of his face while saying ‘goodbyeeeeeeeeeeeee,'” comedian Michelle Collins tweeted.

“Luke is the classic psychopath. His ‘I saw God’ moment was just him realizing he can control people by becoming a psuedo preacher. Everything he said to Hannah was about control, even his last words ‘can we pray together,” one user tweeted.

“I keep thinking about @AlabamaHannah saying @TylerJCameron3 would stop their physicality on his own in fantasy suites. Unfortunately, even when ‘i don’t want to have sex,’ is communicated, someone often still pushes to see if that can change. Tyler didn’t,” ET Live host Lauren Zima tweeted.

to the windmill, to the wall. ? #TheBachelorette

Me waiting outside of the fantasy suite in case Hannah’s dumb enough to say no to Tyler C:#TheBachelorette pic.twitter.com/5KmMZwgrWo

Luke preaching from the Bible on his Fantasy Suite date with Hannah. #thebachelorette pic.twitter.com/It2Tn5Ls7O

Hannah: I donâ€™t want to go into the fantasy suite with you to have sex
Bachelor Nation:#thebachelorette pic.twitter.com/UNxU546HOY

When everyone saw Hannah and Peter walking into the windmill #TheBachelorette pic.twitter.com/Z0im1Rj1Uw

Live footage of me getting ready for Lukeâ€™s fantasy suite date #TheBachelorette pic.twitter.com/5Ss5NJGKYx