Turning ‘anger into something good,’ this Mi’kmaw boy is walking 200 km for residential school survivors 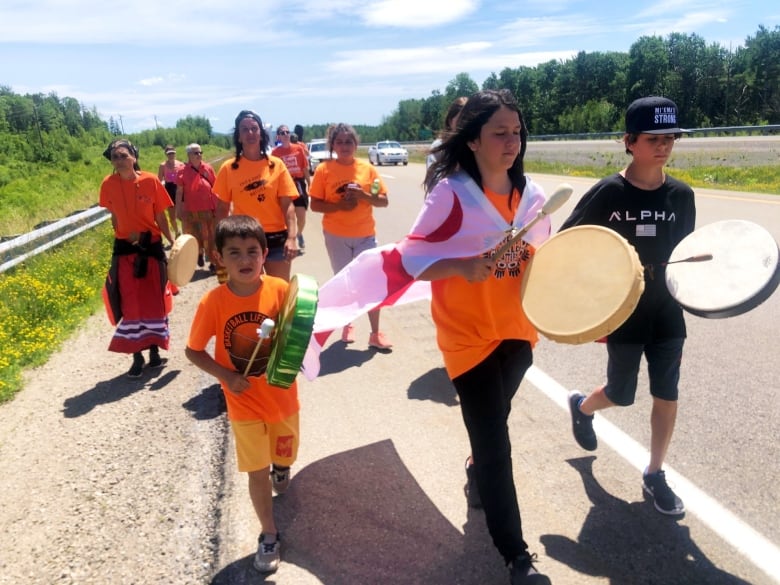 When Landyn Toney laces up his shoes for the sixth and final day of his walk, the 12-year-old Mi’kmaw boy will have already covered 180 kilometres — pushing himself through each step with the reminder that his ancestors were forced to walk through their pain.

Landyn set off from Bible Hill, N.S., about 45 kilometres north of the Shubenacadie Residential School where his great-grandmother spent her childhood, on Canada Day.

This year, Indigenous leaders and allies called for mourning and reflection on the holiday, which followed the discovery of what appear to be more than 1,000 unmarked graves at or near three former residential schools in B.C. and in Saskatchewan last month — and to highlight the ongoing issues of systemic racism in this country.

But Landyn says he felt frustrated that his school did little to acknowledge the grave sites or the effect that the residential school system had on survivors and their families.

“I’m not the kind of person that just wants to let my anger go,” he said, speaking from the side of a highway after five days of walking. “I wanted to show my anger by doing something good.”

His mother has supported his passion. Marsha McClellan and her son created a route within days of his idea, one that would take them from their home to Annapolis Valley First Nation, where Landyn was born. That route runs about 203 kilometres, which is the equivalent of nearly five marathons.

Landyn and his mother are expected to arrive at the Annapolis First Nation on Tuesday evening.

“I’m sore, I’m proud, I’m holding a heavy heart; a lot of different emotions going on,” she said Monday. “Maybe we will feel what some of those kids felt when they were trying to run home from the residential schools — and we’ll feel that physical pain and that emotional pain and maybe we’ll have a better understanding.”

She said that she thinks their journey has already begun to resonate with people across Canada. Their Facebook page has gained more than 8,700 followers and they’ve raised $19,000 as of Tuesday morning.

“There’s been so many hidden truths, there’s so many Canadians that aren’t aware of what actually happened in residential schools or how many people it has affected,” she said. “We want to change that.”

‘The next time you come back…’

A committee will decide how the funds get distributed among Indigenous causes, but Landyn says that he wants to make sure that some of it gets spent on creating more Mi’kmaw classes for the Nova Scotia education curriculum.

He says he’s been inspired by the support he’s gotten along the way: Survivors have walked with him and people have lined highway overpasses, dressed in orange, to cheer him on.

During an interview, he stopped to smile as a car honked behind him on the highway — only to be interrupted by a siren as an ambulance also showed solidarity. RCMP cruisers have escorted him throughout these past five days along the highway.

Landyn Toney, a young Indigenous boy in Nova Scotia, has taken matters into his own hands to raise awareness about residential schools with a walk across the province. The 200-kilometre walk could take six days. 2:01

And his great aunt and great uncle joined him on Monday.

They are paying tribute to their mother, Regina Toney, who was a survivor of the Shubenacadie Residential School but died in 2011. She was also Landyn’s great-grandmother.

Eileen Lloyd recalls not only her mother’s stories of the school system, but also her own narrow escape of it in 1952. That’s when an Indian agent came to her school in the Annapolis Valley, she says, and her principal told her and her brothers to go out the back stairway, run home and hide there.

The agent came back a month later, she said, but went to their home that time where her father was there making baskets.

Her father told the man, “‘You just get off my reserve,’ in no kind words,” she said. “And he took his knife and cut [the man’s] necktie right off — and he said, ‘The next time you come back, it’ll be your throat.'”

Her mother’s time at residential school and the fear of being taken away continued to affect the family, both she and her brother, Mark Toney said. They didn’t speak the Mi’kmaw language.

And that’s also why it’s spiritual for him to see his great-nephew walk in honour of survivors and of those who died at the schools, he said.

“It means a lot to me just seeing a child come out in this way and accept a journey like this,” Toney said. “It just sends a chill through my bones when I see him; he’s so dedicated.