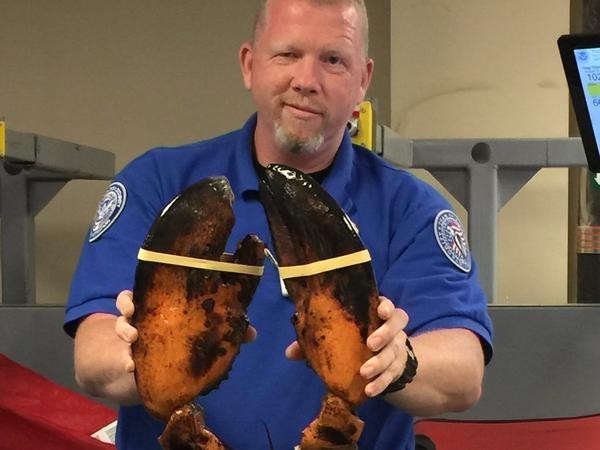 Transportation Security Administration agents at Logan Airport’s Terminal C in Boston snapped to attention Sunday, when they came across a live 20-pound lobster lurking in a cooler among the checked luggage.

“The lobster was screened and allowed to continue on its way,” TSA spokesman Michael McCarthy tells NPR in an email.

He tweeted about it Monday saying, “@TSA officers are skilled at screening all sorts of items in checked baggage…including this 20+ pound lobster at @BostonLogan.”

McCarthy said Sunday’s catch may have been a record-breaker for the TSA. “I would be shocked if this isn’t the biggest lobster TSA has screened, although I can’t say for certain,” he tells NPR.

And while its size may have been surprising, the fact that a lobster was found at the airport wasn’t. “It’s actually fairly common in the New England region,” McCarthy tells The Boston Globe.

TSA is open about clearing the crustaceans for takeoff. It has a lobster clause right there on its web site. “A live lobster is allowed through security and must be transported in a clear, plastic, spill proof container.” But if a passenger plans on carrying on the lobster, rather than checking it, TSA does recommend asking the airline first.

TSA has a not exhaustive, yet pretty thorough list of what is and isn’t OK to pack. The rules are stricter for what is allowed in carry-ons, but there is significant leeway for checked baggage. Bear spray, axes and declared and unloaded firearms are all permitted in checked bags.

And while Logan’s lobster survived the security screening, there is no word on whether a lobster pot was its ultimate destination upon its arrival.