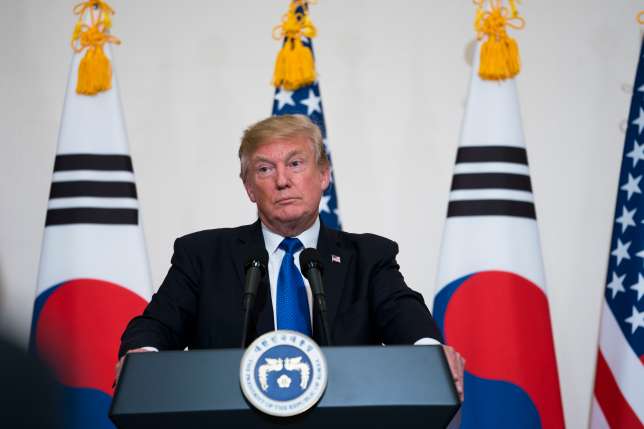 But in a single day, President Donald Trump managed to unsettle the region on not just one front but two.

Under normal circumstances, just one of the announcements that came out of the White House on Thursday would have unnerved U.S. allies in Asia.

But in a single day, President Donald Trump managed to unsettle the region on not just one front but two.

Hours after he signed orders to impose stiff and sweeping tariffs on imported steel and aluminum, including from key allies like Japan and South Korea, he accepted an invitation to personally meet North Korea’s leader, Kim Jong Un, for negotiations over the North’s nuclear program.

For allies who have long looked to the United States to provide security and stability, it was a dizzying jolt of drama that injected fresh uncertainty into strategic calculations in the region, where China is seeking to supplant the United States as the major power.

“This is without question a big opportunity for China,” said Ian Bremmer, president of the Eurasia Group, a New York-based research firm that forecasts global risks. “The United States has become a less certain partner for a while now.”

By all accounts, Trump made improvisational decisions about both the tariffs and the talks, either against the advice or without the knowledge of key administration officials and advisers.

“The abrupt decision on steel tariffs and now the summit with Kim Jong Un will inevitably raise questions in Tokyo and other allied capitals about how decisions are made by this administration that affect their interests,” said Michael J. Green, a former Asia adviser to President George W. Bush who is now at the Center for Strategic and International Studies in Washington, and who met with Japanese officials in Tokyo on Friday.

The news that Trump wanted to meet with Kim did provide relief, at least in the short term, from months of growing fears that military conflict would break out on the Korean Peninsula.

“On the one hand, we’re buying time, and Trump is not going to bomb in the spring,” said Gordon Flake, chief executive of the Perth USAsia Centre at the University of Western Australia. “That’s good.”

But, Flake added, Trump “demonstrated extreme capriciousness on something like tariffs. This is why everyone in the region is having the same reaction: equal parts relief and alarm.”

Trump’s seemingly unstoppable series of erratic moves has helped cast China as the more stable power in Asia. But it has also diverted attention from Chinese actions that would otherwise have raised much more alarm.

“One of the most underreported consequences of the last 18 months is that China has gotten a free pass,” said Flake, citing the country’s military buildup on islands in the South China Sea, its economic punishment of South Korea for cooperating with the United States on a missile defense system and, most recently, President Xi Jinping’s power grab, persuading the Communist Party to abolish limits on his time in office.

Under any other U.S. administration, “the dominant narrative would have been Chinese overreach and internal crackdowns,” Flake said. “But that narrative has been completely washed away by the chaos that is Trump.”

The most recent announcements out of Washington, particularly the tariffs, could hurt China. Clearly, a trade war would be painful. And as Trump plans his meeting with Kim, Beijing is forced to sit on the sidelines awaiting the result.

“The downside risk for them is that they are not in the room,” said Mira Rapp-Hooper, a scholar of Asian security issues at Yale Law School. “Being completely cut out of a genuine relationship between the U.S. and North Korea is not in their interest.”

Still, lengthy talks between the United States and North Korea, even if they do not produce an agreement, would serve to delay some unpalatable decisions for China, analysts said.

North Korea has become increasingly disgruntled with China since Kim took charge, particularly as Beijing has backed economic sanctions against it. That has complicated China’s efforts to diminish U.S. influence in the region.

“China wants the nukes removed, but not at too high a geostrategic cost, in the form of North Korea becoming China’s permanent enemy or falling into enormous domestic chaos or sliding into the American fold,” said Shi Yinhong, a professor of international relations at Renmin University of China in Beijing.

“It suits China’s long-term strategic interest perfectly, because what they don’t want to see is pressure on North Korea leading to the strengthening of American alliances,” Green said. “China’s strategy is to start pulling apart those alliances incrementally.”

Increasingly, Asian allies that once viewed the United States as an anchoring force in the region now worry about being played off against each other. Japan and South Korea in particular, whose relations have recently deteriorated over long-standing historical disputes, find themselves jockeying for Washington’s favor.

In Japan, Prime Minister Shinzo Abe has worked hard to cultivate a warm relationship with Trump. So even as Trump withdrew from the Trans-Pacific Partnership, a multilateral trade deal centered in Asia, and imposed the new steel and aluminum tariffs, government officials have tempered their criticism.

“Japan and the United States are allies, so the Japanese government doesn’t want to be too negative toward the Trump government,” said Kazuhiro Maeshima, a professor of politics at Sophia University in Tokyo.

South Korea, meanwhile, lobbied for an exemption to the tariffs, citing the importance of the alliance. The envoys who visited the White House to brief Trump on their meeting with Kim made personal appeals to the defense secretary, Jim Mattis, and the national security adviser, Gen. H.R. McMaster, on the tariff issue, according to Kim Eui-kyeom, a spokesman for President Moon Jae-in.

The tariffs prompted harsh words in some South Korean news outlets for the leader of the country’s most important ally. “His style of governing, marked by disconnectedness and arrogance, is just mind-blowing,” a liberal daily newspaper, Hankyoreh, said in a Saturday editorial.

For Asian allies, perhaps the most difficult task in dealing with Trump — one that is hardly unique to foreign governments — is scrambling to discern his true intentions.

Trump often “is saying one thing in Japan and another thing in Seoul,” said Mine Yoshiki, a former Japanese Foreign Ministry official who was involved in past talks between Japan and North Korea, and who now runs a think tank, the Institute of Peaceful Diplomacy.

Moon, after being sidelined by Washington in its approach to North Korea a few months ago, would now seem to be in favor, having effectively brokered Kim’s invitation to Trump. But analysts warned that the talks could go in directions South Korea might not welcome.

“We quickly get to the question of what is going to be talked about here,” said Rapp-Hooper. “Kim Jong Un is clearly not ready to give up his nuclear weapons. If it gets to that, he will make extreme security demands, not only a security guarantee, but demanding that we end our alliance with South Korea and withdraw our troops from the peninsula.”

If Trump offered to significantly reduce America’s presence in South Korea in exchange for limits on the North’s nuclear program, it would be a setback for South Korea and Japan and a long-term win for China.

U.S. allies in the region, along with many developing countries in Southeast Asia, want the United States to maintain a strong presence, as much to counterbalance China as to promote democratic values, said Kristi Govella, an assistant professor of Asian studies at the University of Hawaii at Manoa.

“Most countries would prefer not to be dominated by anybody — whether it is the U.S. or China or Japan,” Govella said. “Especially for the smaller countries, they want to hedge a bit and have different options, and not be subject to the will of any particular country.”