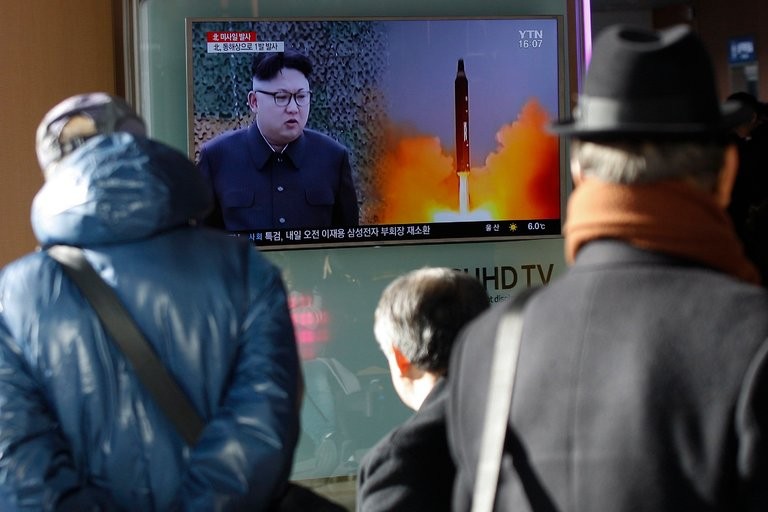 The latest missile test by North Korea is another challenge for the Trump administration. The president responded to the launch on Twitter. North Korea expert Laura Rosenberger says U.S. intentions aren’t clear to either adversaries or allies.

Rosenberger, who served in the State Department under Bush and the National Security Council under Obama, talks to NPR’s Kelly McEvers about the test and the president’s reaction.

North Korea has successfully tested an intercontinental ballistic missile, also known as an ICBM. Secretary of State Rex Tillerson condemned the launch and said, quote, “global action is required to stop a global threat.” In response, the U.S. and South Korea say they have launched missiles into the territorial waters near South Korea as part of a joint military exercise. Elsewhere in the program, we hear from a scientist who says the missile has the potential of reaching Alaska. The launch is the latest challenge for the Trump administration, which has tried a few different ways to put pressure on North Korea. Laura Rosenberger worked on North Korea policy under both the Bush and Obama administrations. Most recently, she was a foreign policy adviser for the Hillary Clinton campaign. I talked to her earlier today, and I asked how an administration and its national security council usually respond to an action like this.

LAURA ROSENBERGER: You know, usually a response like this would be a highly coordinated effort between different parts of the U.S. government, the White House, the Department of Defense, the State Department. You know, there’s an immediate period of coordination where you ensure that you know in fact what kind of missile you’re dealing with, if it poses a direct threat to the United States or to our allies. You know, once that determination is made, you sort of switch into a lot of diplomacy mode. And so there’s a lot of conversation around what is a statement going to say, what are we going to say in response, what is our immediate next steps going to be?

MCEVERS: So how does the Trump administration follow these conventions that you’re talking about when something like this happens, and how does it deviate?

ROSENBERGER: You know, it’s hard to tell exactly what goes on sometimes inside the Trump administration. But, you know, what I would note is that it appears that the president’s first and most immediate response was to turn to Twitter to make his statement there. And I think it’s very important that we consider the president’s words on Twitter to be statements. There’s no semblance that the president at the very top is following a coordinated strategy or frankly is messaging based on that strategy. He is, in fact, sending very unclear signals to our adversaries and our allies and ones that are potentially at odds with what would be a strategy that his administration could carry out.

MCEVERS: I’m just going to read these two tweets from President Trump. Quote, “North Korea has just launched another missile. Does this guy have anything better to do with his life? Hard to believe that South Korea and Japan will put up with this much longer. Perhaps China will put a heavy move on North Korea and end this nonsense once and for all.”

So you’re saying that normally if there would be a statement coming out from the White House or another agency, it would be something that would be carefully considered, that each word would be vetted and thought about ahead of time, yeah?

ROSENBERGER: Yes because in, you know, in dealing with a situation like this, there’s two concepts that are really important for how we respond and those are deterrance and reassurance. You want to deter your adversaries from taking actions that would be harmful to us and our allies. You want to reassure our allies that we are going to be there for them should they need us to be so and that they don’t need to take any kind of action that would potentially set off an escalation cycle. I think the president’s message last night was not clear to either our adversaries or our allies in terms of what our intentions were and what he was actually trying to indicate as far as the path forward.

MCEVERS: We hear a lot of reports about how some key posts haven’t been filled in this administration. Do you think that affects the situation now?

ROSENBERGER: Yes. I was mentioning previously some of the coordination that would be going on with our allies and our partners. A lot of that coordination’s going to happen at sort of the assistant secretary level, assistant secretary of state, assistant secretary of defense. Having those posts unfilled means that those kinds of channels aren’t really able to function in the way that they should. Now, there are people who are in those who are acting, and they are doing the job as best as they can. But without our allies and our adversaries knowing that those people have been given the seal of approval from the White House, they don’t know whether to attach very much weight to what they say.

MCEVERS: What have you seen from this administration that does give you confidence?

ROSENBERGER: You know, last week I believe it was, they imposed some sanctions on a Chinese bank for doing business with North Korea. I think that’s the kind of step that we need to see. That’s actually based on a lot of work that the Obama administration had already in motion, and I was glad to see that they continued that.

MCEVERS: It sounds like the president in particular is wanting to really to get China to move in on this. What do you think the approach should be with China?

ROSENBERGER: I agree that China needs to do more. That’s what the Obama administration certainly tried to do. That’s what the Bush administration tried to do. I think that in some ways President Obama is waking up to the realities of this challenge, but I also think that it’s really important that he understand that there are limits to what China’s going to be able to do. And this is not a problem that we can outsource.

MCEVERS: Laura Rosenberger served under the Bush and Obama administrations on North Korea policy. She also advised Hillary Clinton. Thanks for your time today.

ROSENBERGER: Thanks so much, Kelly.