Trump praised a woman’s body. A foreign minister wondered ‘if she could say the same of him.’ 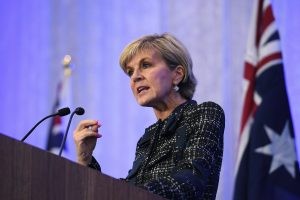 President Trump’s remarks upon meeting the wife of the leader of France last week — “You’re in such good shape … beautiful!” — inspired many people around the world to many different thoughts.

Some thought it was creepy. Some thought it “hurts America.” Reebok thought you should only ever vocalize such an observation to a childhood toy, rediscovered in perfect condition in your parents’ basement. Certainly not to a woman, much less the spouse of an important ally.

In case you were wondering when it IS appropriate to say, “You’re in such good shape … beautiful,” … THIS: pic.twitter.com/Z1cnnRD8Ut

But, speaking of allies, what did they think of what Trump said in Australia, which has its own history of awkward diplomacy with the president?

The Australian Broadcasting Corporation called up the country’s foreign minister to find out.

“You’re in such good shape, such good physical shape, beautiful,” the host told Foreign Minister Julie Bishop, quoting Trump. “Would you be flattered or offended?”

This was arguably a politically sensitive question, what with alliance and all. But the foreign minister didn’t hesitate.

And then this zinger: “I wonder if she could say the same of him?”

BuzzFeed (and not just BuzzFeed) declared this to be the response “every woman in the world is thinking.”

Julie Bishop just said what the women of the world have been thinking. #auspol #trump

The host prompted Bishop for more: “You find it a bit condescending then, in other words,” he said.

But the foreign minister would say no more on the subject.

Her focus, she said, is “how it benefits both our nations to have one of the closest connections two countries can have in defense, security and trade.”

Which is true. As Greg Miller and Philip Rucker wrote for The Washington Post, Australia is one of only four countries in the world with whom the U.S. espionage agencies extensively share intelligence.

Which is why it caused such a fuss when Trump harangued Australian Prime Minister Malcolm Turnbull on the phone in February — accusing Australia of trying to export “the next Boston bombers” before the president abruptly ended the call.

The art of trans-Pacific flattery appeared to be making a turn for the better when Turnbull visited the United States in May, and congratulated Trump on a House vote to repeal the Affordable Care Act.

But not really. Trump is not exactly popular with the Australian public, two-thirds of whom opposed his election, according to an Ipsos poll. More recently, an Australian Broadcasting Corporation editor went viral after saying Trump “has pressed forward on the decline of the United States as a global leader.”

And in June, a month after flattering Trump in New York, Turnbull was caught on video making fun of the U.S. president to a room full of Australian reporters.

“I have this Russian guy; it’s true; believe me it’s true,” he continued to riotous laughter.

When the tape leaked, Turnbull told a radio station his parody had been in good humor, and “the butt of my jokes was myself.”

Before Trump’s election, Bishop acknowledged the challenges of working with a president who did not appear to care about global leadership.

“It will be up to our region, including Australia, to persuade a Trump administration to focus on the Asia-Pacific,’ the foreign minister told the Australian Broadcasting Corporation.

Asked if she had intended to insult Trump’s physique this week, Bishop’s office did not immediately respond.

Trump recorded having extremely lewd conversation about women in 2005

Terrorists are building drones. France is destroying them with eagles.

We thought New Zealand was an island nation. Scientists say it’s the tip of a ‘hidden continent.’

‘My daughter’s death will not be used’: Parents furious over Trump’s false terrorism claims