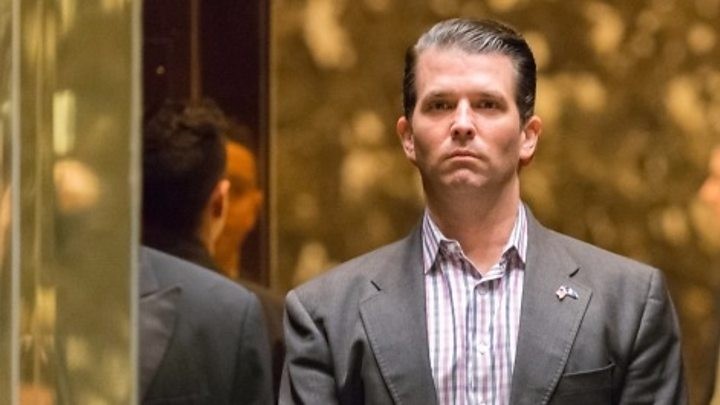 US President Donald Trump’s son has said he did not tell his father about a meeting with a Russian lawyer who said she could help his election campaign.

Donald Trump Jr told Fox News the meeting was “just a nothing” but he should have handled it differently.

He released emails showing he welcomed an offer to meet the lawyer, who was allegedly linked to the Kremlin and had material damaging to Hillary Clinton.

US officials are investigating alleged Russian meddling in the US election.

Since he was elected, President Trump has been dogged by allegations that Russia tried to sabotage Mrs Clinton’s campaign.

He has denied any knowledge of this and Russia has also repeatedly denied interfering.

Asked by Fox News’ Sean Hannity if he had told his father about last year’s meeting, Mr Trump Jr said: “No. It was just a nothing. There was nothing to tell.

“I mean, I wouldn’t have even remembered it until you started scouring through this stuff. It was literally just a wasted 20 minutes, which was a shame.”

How did the meeting come about?

At that time, his father was the presumptive Republican nominee and heading towards an election fight against his Democratic rival, Mrs Clinton.

One email from Mr Goldstone said the information they had been promised was “obviously very high-level and sensitive information but is part of Russia and its government’s support for Mr Trump”.

The meeting took place, but Mr Trump Jr told Fox News the woman provided them with nothing of use and it only lasted 20 minutes.

What else did Trump Jr say in this interview?

In retrospect, he would have done things a little differently, Donald Trump Jr told Fox News, but he defended his actions.

“This is before the Russia mania, this is before they were building this up in the press. For me this was opposition research, they had something you know maybe concrete evidence to all the stories I’d been hearing about.”

He could not vouch for the information he was sent, he said.

“Someone sent me an email. I can’t help what someone sends me. I read it, I responded accordingly, and if there was something interesting there, I think that’s pretty common.”

What has the reaction been to the story?

President Trump issued a brief statement in support of his son, describing him as “a high-quality person” and applauding his transparency.

Mr Goldstone has previously denied any knowledge of involvement in the election by the Russian government.

Ms Veselnitskaya has said she was never in possession of information that could have damaged Mrs Clinton, and has no links to the Kremlin.

The highest-ranked Democrat on the House Intelligence Committee, Adam Schiff, said he wanted Mr Trump Jr and all participants in the meeting to testify before the panel.

There are several congressional committees looking into Russian interference and whether anyone on the Trump team helped, as well as a special counsel.