Trump Deals In Saudi Arabia May Ultimately Be Less Than Advertised 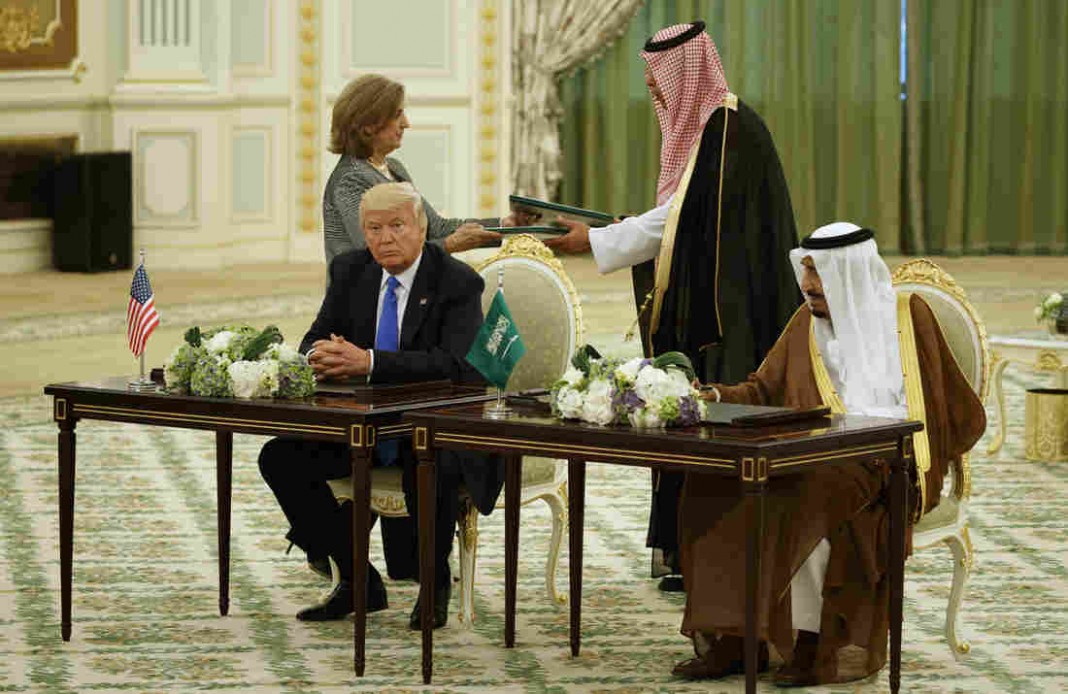 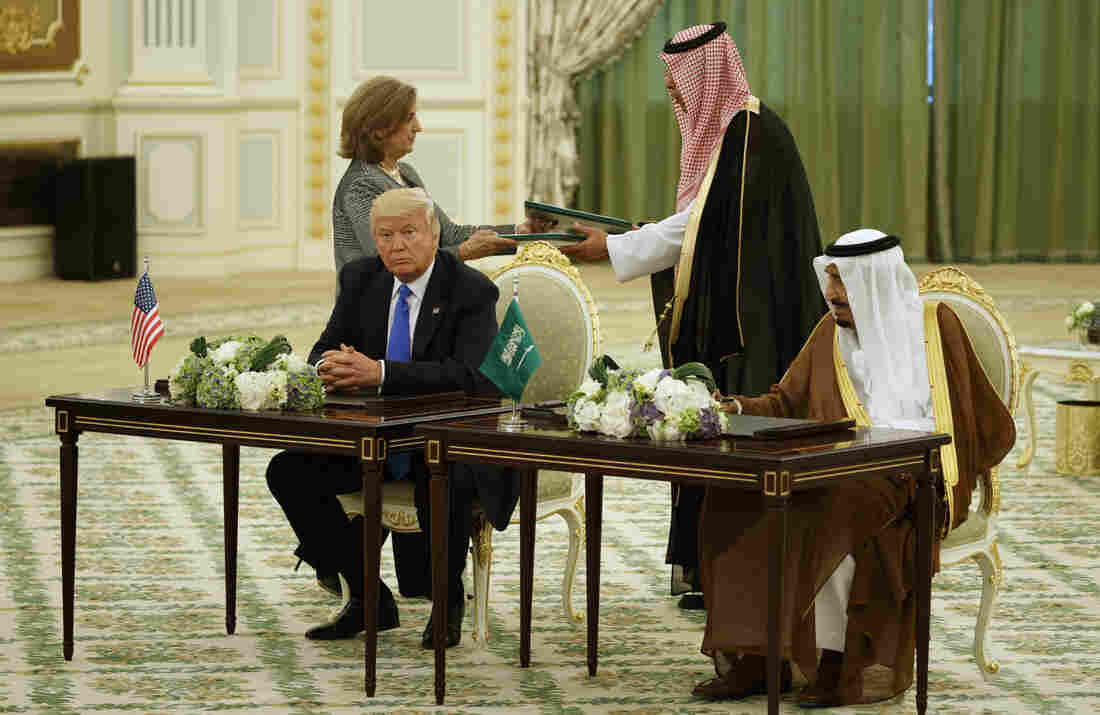 President Trump and Saudi King Salam participate in a signing ceremony at the Royal Court Palace in Riyadh, Saudi Arabia on May 20. Evan Vucci/AP hide caption

President Trump and Saudi King Salam participate in a signing ceremony at the Royal Court Palace in Riyadh, Saudi Arabia on May 20.

President Trump and Saudi King Salman sat side by side in the Royal Court Palace in Riyadh, Saudi Arabia, and watched as agreement after agreement was signed by Saudi officials and American CEOs. The signing ceremony lasted 22 minutes.

“Hundreds of billions of dollars of investments [into] the United States and jobs, jobs, jobs,'” President Trump raved to reporters a short time later.

A State Department official says the agreements are worth $380 billion: $110 billion in arms sales and $270 billion in commercial agreements. But beyond that, U.S. officials were slow to provide a complete list of the agreements or a full accounting of the totals they provided.

That hasn’t, however, stopped President Trump and members of his administration from using superlatives to describe what was achieved in Saudi Arabia.

“The president was able to make some of the most amazing deals that have really been made by an administration ever,” said White House economic adviser Gary Cohn, speaking to reporters at the end of the president’s trip. “I have to tell you personally. I’ve been in business for 30 years. I’ve been doing this my entire life. I’ve never seen anything come together like this.”

After Cohn said that, NPR emailed White House press secretary Sean Spicer asking for details — not for the first time. Spicer’s three-word response: “working on it.”

An administration official later provided by phone what he said was a “partial list” that included only some of the commercial and arms deals. Added together, it came to just $83 billion — a far cry from the top-line number touted initially.

A State Department official offered this:

“At least 30 commercial Memoranda of Understanding (MoU) between U.S. companies and the government of Saudi Arabia were exchanged at a Royal Court ceremony in the presence of President Donald J. Trump and King Salman. According to information supplied by the majority of U.S. companies involved in these deals, we believe that the MoUs, when fully executed, represent nearly $270 billion in commercial deals for U.S. companies, and potentially tens of billions of dollars more.”

It turns out most of what was signed in the palace wasn’t completed deals or signed contracts, but rather nonbonding agreements (“Memoranda of Understanding”) between U.S. companies and Saudi entities. Press releases from the companies included the words “preliminary,” “proposed” and “potential.” Others make it clear the arrangements had been in the works before President Trump was elected.

While the White House spreadsheet lists Exxon Mobil as inking a $22 billion deal, the company wasn’t willing to put a dollar figure on it when contacted by NPR.

“ExxonMobil and SABIC are proposing to build a plastics manufacturing facility in San Patricio County, Texas. It’s anticipated to be a multibillion dollar project; however, it is premature to speculate on final costs until detailed design is completed and the value of construction contracts is available,” said Aaron Stryk, an Exxon Mobil media relations adviser, in an email to NPR.

He went on to describe how many jobs could be created by “the envisioned project if it moves forward.”

The agreement signed during the president’s visit would allow both parties to begin engineering and design work and construction site preparations, though Stryk noted that the project was initially announced in July 2016. That was well before President Trump took office.

Japanese SoftBank announced during the president’s trip abroad that it had secured $93 billion in funding for its Vision Fund, with a big chunk of that money coming from Saudi Arabia’s Public Investment Fund. The White House spreadsheet lists that as $100 billion in “technology investments with main investments in U.S.”

However, it’s not clear how much of that money will be invested in the U.S. When SoftBank first announced the plans for the fund in October 2016, CEO Masayoshi Son said in a statement: “with the establishment of the SoftBank Vision Fund, we will be able to step up investments in technology companies globally.”

This isn’t the first time the Trump White House has hailed an announcement involving SoftBank (and many analysts suspect this very same fund) as an American job booster. In December Son visited Trump Tower, and the president-elect said Softbank would be making a big investment in U.S. technology companies as a result of his election.

The White House lists $40 billion in U.S. infrastructure investments through a fund created by Blackstone and the Saudi Public Investment Fund. The Saudi investment is $20 billion. The rest hasn’t been secured yet.

“Blackstone anticipates that the program will have $40 billion in total equity commitments in a permanent capital vehicle, including $20 billion to be raised from other investors,” Blackstone said in a statement announcing the planned launch of the investment fund. “The MOU is non-binding and the parties will continue their negotiation to agree definitive documentation.”

As for the $110 billion in military equipment sales, that’s easier to track, because the State Department has to sign off and information about the sales has to be posted, all before final contracts can even be negotiated. About $25 billion of it has been posted. However, those potential arms sales were all set in motion during the Obama administration.

Aaron Mehta, the senior Pentagon correspondent with Defense News, started digging into the numbers immediately after the announcement. He points out a $6.8 billion deal for munitions and support was posted and brought to Congress in October 2013.

And the other $85 billion? It’s partially deals that were already announced. And the rest are still subject to approval by the State Department and Congress, all before final sales agreements —which are very much subject to change — can be hammered out.

“Before everyone goes celebrating — ‘This is the biggest deal ever announced, this is a major program, this is going to shift relations in the Gulf and make Saudi Arabia into even more of a global power’ — let’s see what happens,” said Defense News’ Mehta in an interview with NPR.

Brookings Institution Senior Fellow Bruce Riedel was even less charitable. “There is no deal. It’s fake news,” he wrote in a scathing piece on the Brookings website. “I’ve spoken to contacts in the defense business and on the Hill, and all of them say the same thing: There is no $110 billion deal. Instead, there are a bunch of letters of interest or intent, but not contracts. Many are offers that the defense industry thinks the Saudis will be interested in someday.”

It could be years before anyone knows for sure whether the preliminary agreements announced in Saudi Arabia have become real deals worth hundreds of billions, or whether the announcements were the kind of hyperbole Trump perfected during his time in the business world.