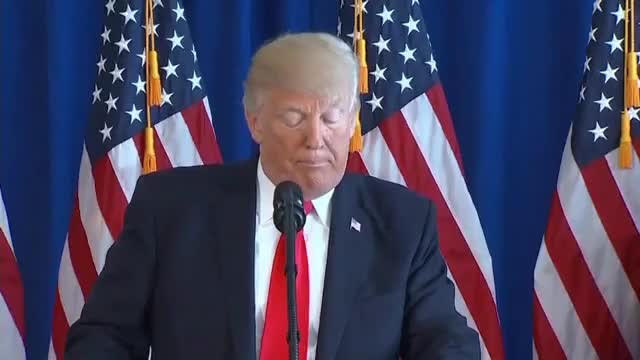 President Trump first asked reporters to define the “alt-right,” before saying members of the “alt-left” were also to blame for violence in Charlottesville, while taking questions from reporters on Aug. 15 at Trump Tower in New York. (The Washington Post)

President Trump declared Tuesday that counterprotesters at a white supremacist rally in Charlottesville acted violently and should share the blame for the mayhem that left a woman dead and many injured.

Speaking at Trump Tower in Manhattan, the president called the events of Saturday at the “Unite the Right” rally a “horrible thing to watch,” but he emphasized that both sides acted irresponsibly.

“I think there’s blame on both sides. And I have no doubt about it,” Trump said.

Trump’s remarks came a day after he belatedly condemned the Ku Klux Klan, neo-Nazis and other hate groups that organized and participated in the rally. He had faced mounting pressure from lawmakers and civil rights groups over his failure to do so during his initial reaction to the violence, when he denounced violence “on many sides.”

But Tuesday, Trump defended his handling of the Charlottesville situation, stating he did not want to jump to conclusions in his initial remarks. “There was no way of making a correct statement that early,” he said in an impromptu news conference in the lobby of Trump Tower, after an announcement about infrastructure. “I had to see the facts, unlike a lot of reporters.”

President Trump spoke about his initial statement following the violence in Charlottesville, Va., at a news conference in New York on Aug. 15. (The Washington Post)

Trump called the driver of the car that killed counterprotester Heather Heyer, 32, and injured 19 a “disgrace to himself, his family and the country,” but he stopped short of declaring the action a case of “domestic terrorism,” calling that an exercise in semantics. Attorney General Jeff Sessions has said that the act fits that definition, and the Justice Department has launched a federal civil rights probe into Heyer’s death. Prosecutors have charged James Alex Fields Jr. of Ohio, who has reportedly espoused Nazi propaganda and participated in the rally, with the crime.

[Charlottesville victim: ‘She was there standing up for what was right’]

Trump emphasized repeatedly that he believed many of the “Unite the Right” rally participants were not members of hate groups and were there to protest the pending removal by the city of a statue of the Confederate Gen. Robert E. Lee.

“You had people in that group who were protesting the taking down of what to them is a very, very important statue,” Trump said, before suggesting that Lee and other Confederate-era generals, including Stonewall Jackson, are the victims of historical revisionism attempting to delegitimize their roles.

Trump reiterated his condemnation of neo-Nazis and other white supremacists. But he also made clear that he believed that some of the counterprotesters were armed and took aggressive actions that helped spark the violence.

“What about the alt-left that came charging at the alt-right — do they have any semblance of guilt?” Trump said. “They came charging, clubs in hand, swinging clubs.”

Lawmakers on both sides of the aisle, including Sens. Marco Rubio (R-Fla.) and Brian Schatz (D-Hawaii), quickly denounced Trump’s remarks.

Mr. President,you can’t allow #WhiteSupremacists to share only part of blame.They support idea which cost nation & world so much pain 5/6

As a Jew, as an American, as a human, words cannot express my disgust and disappointment. This is not my President.

But in a sign of how Trump’s stance would be embraced by white nationalist groups, David Duke, a former KKK leader, thanked Trump for his “honesty & courage.”

Thank you President Trump for your honesty & courage to tell the truth about #Charlottesville & condemn the leftist terrorists in BLM/Antifa https://t.co/tTESdV4LP0