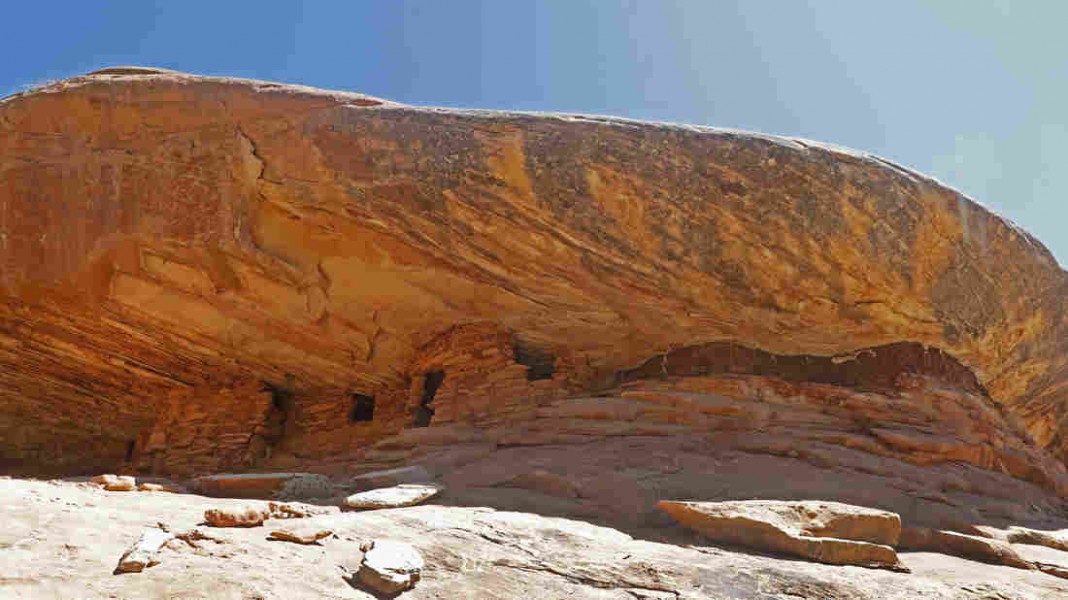 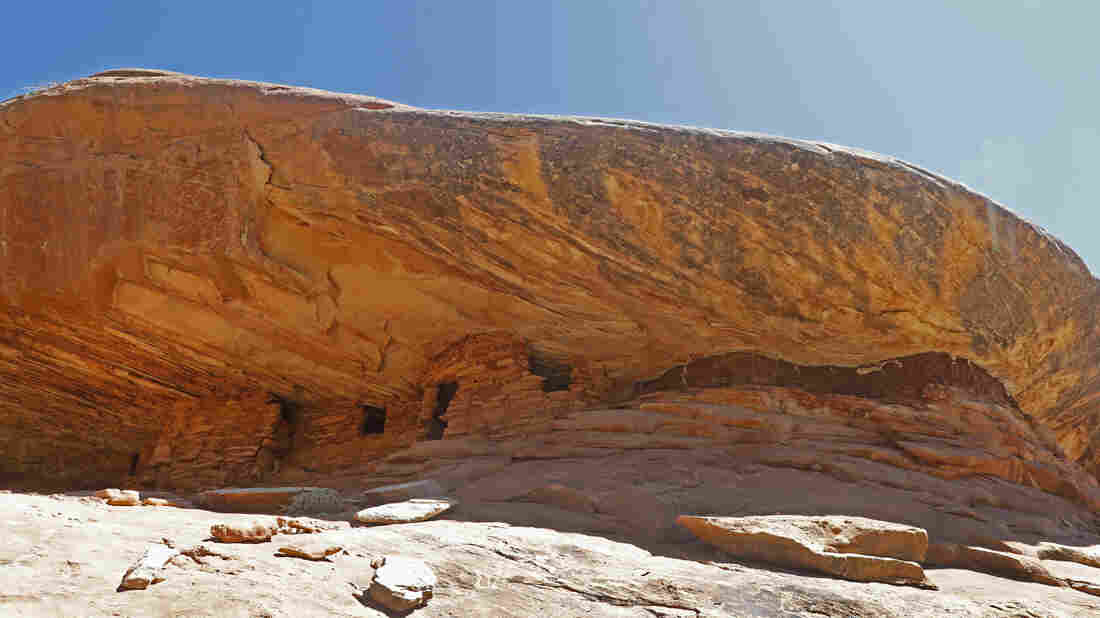 Ancient granaries, part of the House on Fire ruins, are shown here in the South Fork of Mule Canyon in the Bears Ears National Monument outside Blanding, Utah. George Frey/Getty Images hide caption

Ancient granaries, part of the House on Fire ruins, are shown here in the South Fork of Mule Canyon in the Bears Ears National Monument outside Blanding, Utah.

Interior Secretary Ryan Zinke is recommending that the boundaries of the Bears Ears National Monument in Utah be shrunk. He also is calling on Congress to give Native American tribes more say in how the new monument is managed.

Zinke’s recommendation to President Trump, announced Monday, is preliminary. But it signals that the administration does not plan to completely rescind President Obama’s creation of the Bears Ears monument late last year in a proclamation. The preliminary report is the first step of a larger review of more than two dozen national monuments that protect U.S. public lands, mostly in the West.

The former Montana congressman’s decision was awaited as an early test of how the administration will treat public lands issues, in this case balancing the interests of Native Americans, who consider Bears Ears sacred land, and other locals who oppose tough restrictions on other activities.

The announcement comes after a four-day tour the secretary made last month to rural southern Utah, where residents have wanted more input into federal land-control decisions.

“The recommendations were not made in a bubble in Washington D.C.,” Zinke told reporters, adding that he thought they are in the best interest of Utah and the tribes.

Zinke did not specify how much he’d like to see the boundaries of the monument reduced, calling that premature. He did suggest that a priority is to protect the antiquities within the new monument but not necessarily all the land around them.

Bears Ears gets its name from two signature buttes in remote southeastern Utah that resemble bears’ ears. The rocky canyons of the Cedar Mesa below them are dense with cliff dwellings and cultural artifacts, estimated to number near 100,000.

Looting and desecration of these sites was one of the primary reasons the previous administration cited for adding additional federal protections in the area. But the Trump administration has accused previous presidents of using the Antiquities Act more broadly to protect large amounts of public land by executive order, without environmental review, when that’s traditionally been the role of Congress.

“There is a lot more drop-dead gorgeous land than there is historic landmarks, historic structures and other objects,” Zinke said.

Zinke is also calling on Congress to give Native American tribes formal co-management authority once the boundaries of the monument are redrawn. Under the original Obama proclamation, tribes only had an advisory role in managing Bears Ears.

The actual proclamation of Bears Ears as a national monument came after talks between tribes and Utah’s congressional delegation over protecting sacred sites in southeastern Utah broke down. Congress never passed a bill. Most large public lands protection bills have stalled in a polarized Congress dating back to the Clinton administration.

But Zinke, a Republican, said Monday he’s confident that won’t be the case in 2017, with the GOP in control of both chambers and the White House. Zinke added that the administration has enormous respect for tribes and their “sovereignty, respect and self-determination.”

The preliminary report could be seen as an attempt to broker a compromise on one of the country’s most hot-button public-lands issues. But it’s already clear some Native American tribes and environmental groups haven’t been won over.

“The Secretary’s recommendation isn’t about doing what’s best for Utah. It’s not about the nuances of the Antiquities Act, it’s about appeasing political allies and special interests,” the tribal group Utah Dine Bikeyah said in a written statement.

The group called Zinke’s recommendation “illegal” and meant “to turn back the clock one hundred years on tribal relations and Utah’s economy.”

It seems all but certain that tribes and the environmental groups will sue if the administration does shrink the boundaries of Bears Ears.

Zinke’s final recommendations on Bears Ears and 26 other national monuments in the administration’s review aren’t expected until later this summer.