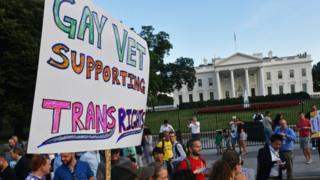 The case was filed on behalf of six serving transgender members of the armed forces.

Mr Trump signed a memo to reinstate a ban on transgender people serving on Friday, after announcing it on Twitter last month.

The policy was lifted by Barack Obama’s administration last year.

The ACLU argues that the ban is discriminatory and violates constitutional guarantees of equal protection.

It described the ban as “cruel” and being based on “myths and stereotypes” and a “desire to harm transgender people”.

It was the second lawsuit announced on Monday, after a separate complaint was filed on behalf of LGBT groups and three other transgender individuals. Two sought to join the armed forces, and a third is already a serving member.

Between 4,000 and 10,000 US active-duty and reserve service members are believed to be transgender.

After consultation with my Generals and military experts, please be advised that the United States Government will not accept or allow……

….Transgender individuals to serve in any capacity in the U.S. Military. Our military must be focused on decisive and overwhelming…..

….victory and cannot be burdened with the tremendous medical costs and disruption that transgender in the military would entail. Thank you

On a statement on the ACLU website, Joe Block, a senior staff lawyer for the ACLU’s LGBT & HIV Project said: “Each and every claim made by President Trump to justify this ban can be easily debunked by the conclusions drawn from the Department of Defence’s own review process.

“Allowing men and women who are transgender to serve openly and providing them with necessary health care does nothing to harm military readiness or unit cohesion.”

One of the listed plaintiffs in the case has served in the US navy for 11 years, including a stint in Afghanistan.

She, like thousands of others, has been left in limbo after President Trump left Defence Secretary Jim Mattis to decide whether to retain existing transgender recruits.

The recruitment ban was justified on grounds of cost and the memo halts the use of government funds for sex-reassignment surgery for active personnel.

The justification was heavily criticised when it was revealed the US military spent ten times as much on erectile dysfunction medication as it does on transgender healthcare.