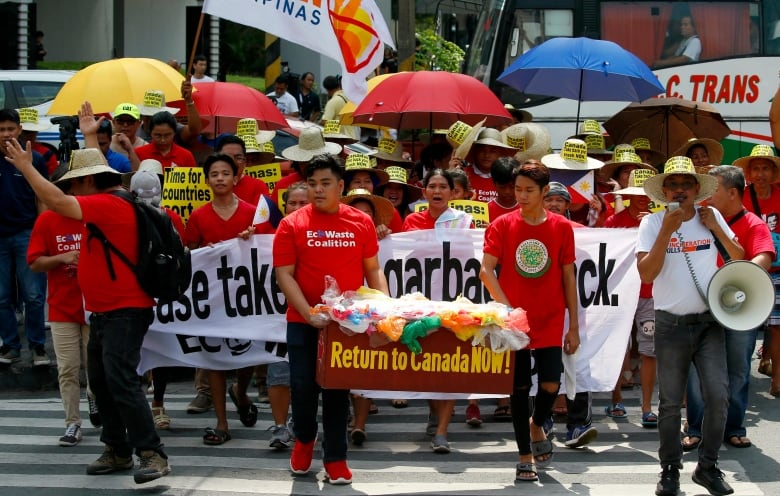 Filipino environmental activists wear a mock shipping container filled with garbage to symbolize the 50 containers of waste that were shipped from Canada to the Philippines in 2013 and 2014, as they hold a protest outside the Canadian embassy in Makati, metro Manila, Philippines, on Thursday, May 7, 2015. (The Associated Press)

Dealing with 1,500 tonnes of contentious Canadian garbage is a dirty job — but somebody’s got to do it — and as it turns out, that someone is going to be Metro Vancouver.

Sixty-nine containers of garbage, shipped to the Philippines but mislabelled and rejected by that country’s facilities, will return to Canada to be burned in Metro Vancouver’s waste-to-energy incinerator in Burnaby.

Metro Vancouver, in a Friday statement, said burning the trash was the most environmentally sustainable option. It added the garbage is mostly mixed plastic and paper with “low levels” of contaminants like electronics and household waste.

“For decades, Metro Vancouver’s Waste-to-Energy Facility has responsibly processed waste material from the international airline and shipping industries, as well as other materials designated for secure disposal by the Canadian Food Inspection Agency,” said Metro Vancouver board chair Sav Dhaliwal.

“We have the technology and capacity to safely and efficiently handle this type of material.” 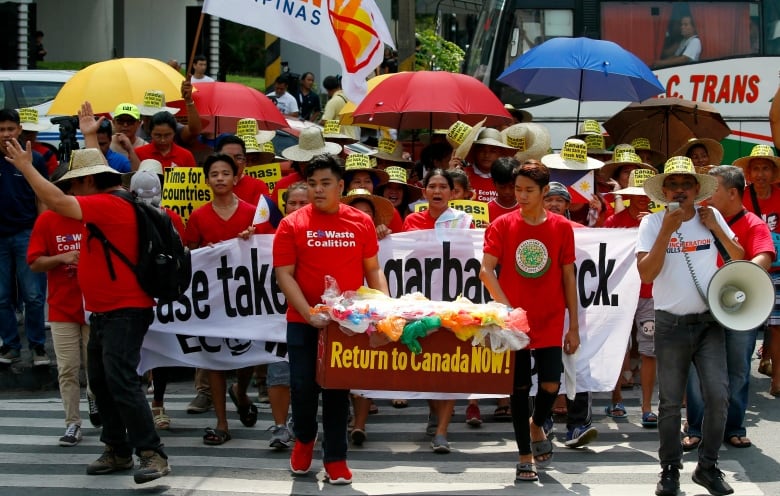 Environmentalists march outside the Canadian Embassy in Manila, Philippines, to demand the Canadian government speed up the removal of containers of garbage that were shipped to the country. (Bullit Marquez/The Canadian Press via AP)

Burning garbage produces electricity for Metro Vancouver. The regional district said the waste-to-energy facility produces enough power to supply the equivalent of 16,000 homes in the region.

Burning the 1,500 tonnes of trash, it continued, would be the equivalent of two days of work for the incinerator.

Metro Vancouver will charge the federal government, which is co-ordinating the return of the trash, its standard special waste handling fee of $250 per tonne.

A spokesperson for the regional district said the garbage will be inspected for hazardous waste before being burned, once at the Port of Vancouver on arrival and again by Metro Vancouver staff and the Canadian Food Inspection Agency at the incinerator.

Any hazardous or “otherwise unacceptable” materials found will not be burned. It will be up to the federal government to arrange for disposal of those materials, the spokesperson said.

“This is kind of unique,” Froese said. “Hopefully we don’t see this again.”

It will be burned over 10 to 14 days, after hours, at the incinerator. Because it has left Canadian shores, he explained, it needs to be burned separately from local trash.

“It’d be nice to have it come back and be able to recycle it, but because of that contamination and because it’s come from offshore, the CFIA doesn’t want to take that risk,” he said. “The risk, I believe, is very low.”

Froese said it didn’t make sense to ship the waste any further across Canada than necessary which is why Metro Vancouver accepted the federal government’s request to burn the trash. 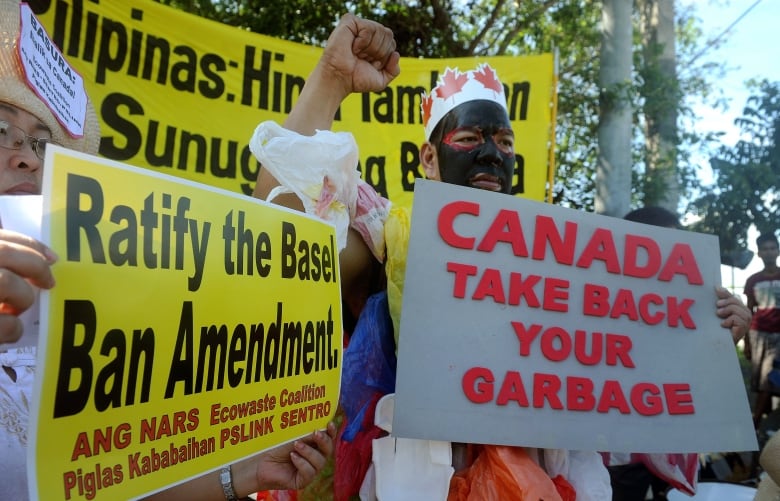 A rally against the Canadian garbage in 2015. A presidential spokesperson has objected to Canada using the nation as a “dumping ground.” (AFP/Getty Images)

Before ending in a literal garbage fire in Burnaby, the trash has smouldered as a diplomatic dispute between Canada and the Philippines.

It was originally sent to the Philippines for recycling in 2013 and 2014, but rejected over contamination. In that country, it has served as a major irritant for years.

In recent weeks, Philippines President Rodrigo Duterte has lashed out against Canada with tough rhetoric. His country’s ambassador to Canada has been recalled over the issue.

Canada is set to pay over $1 million to hire a company to ship the garbage back by the end of June.

The Philippines has rejected that timeline, however, and is moving forward with plans to ship it back to Canada itself.