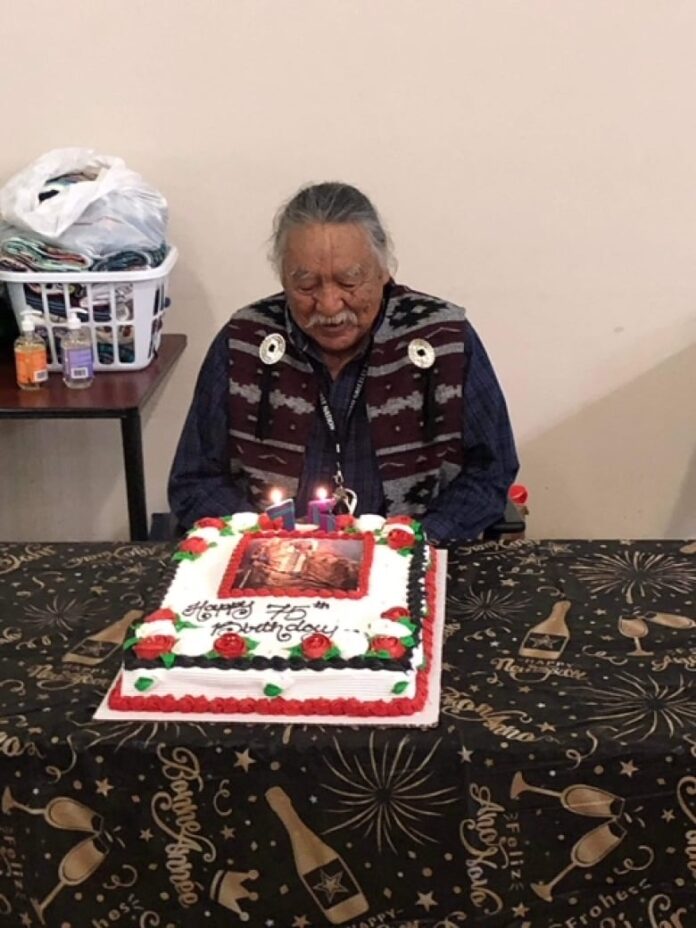 COVID-19 meant no big public events — including cultural events — but round dances and kahomni dances are now coming back.

Elder Pete Bigstone, who usually celebrates his birthday by hosting a kahomni, had to put plans on hold for the past two years.

A kahomni is a dance where two people will two step to songs made specifically for the dance and sometimes take a turn to add to the steps. In old times it was a way for young men to show respect to the young women in courting, in public with little contact. The songs sing about love and even heartbreak, but it’s all meant to be a fun way to socialize.

This year, for Bigstone’s 75th birthday on Jan. 7, he was able to host a kahomoni at his home community of Ocean Man First Nation. Ocean Man is about 135 kilometres southeast of Regina.

Bigstone, a Nakota speaker and teacher, has also been a singer since he was young and was taught traditional dance songs by his grandfather.

He celebrated his birthday with a feast, songs and a dance, to bring people together to share laughter and take home some memories.

Amos McArthur, an advisor from Pheasant Rump First Nation, gets invited to emcee dances where he entertains with stories, keeps the singers on track and motivates people to get up and dance.

“Having my father and my other relatives by my side, and teaching me and sharing the stories, I feel confident enough to get up there and to speak.”

McArthur also brings his daughters Havana and Harmony along, to teach them the tradition of winter dances that go back hundreds of years and to be proud of their Nakota culture.

He even jumps in with the drummers and sings songs his late father Armand passed down.

For some, events being stopped due to COVID-19 brought back memories of the Canadian government banning cultural celebrations for 75 years. The Indian Act prohibited the celebration of ceremonies and dance, including Pow-wows, from 1876 until 1951.

During that time songs and dances were lost, knowledge wasn’t passed down and communities were kept on reserve. Despite this, some Powwows continued in secret and began their resurgence with the emergence of Indigenous rights movements.

Heather Dawn Sparrow and her three children travelled two hours from their home on White Bear First Nation to a round dance on on Carry the Kettle Nakota Nation on Dec. 31.

“We drive two hours for a round dance because I want my kids to be successful in life without assimilating into the colonial system. We have our own ways of living life, and that balance of modernized Indigenous life means that access to our culture isn’t always readily available to us close to home.” stated Sparrow.

A round dance consists of a group of men with hand drums standing in the centre singing songs, and people dancing around the drummers in a circle. Some dancers join hands, while others prefer to go solo.

Originally started with the plains area tribes, the round dance has spread throughout Indigenous communities and was started as a means to bring communities together, usually during winter months, to share songs and stories and to have fun. The round dance songs usually consist of love, loss, and humour.

Sparrow and her kids were excited to be able to show off their newly made ribbon skirts this year.

“Winter months are long. Round dances are a good way to spend time immersed in dance and music with my friends and family. I feel like it is important my children attend round dances to see that we are connected with culture all year long,” Sparrow said in a statement.

Dances usually start around supper time, with communities feeding the people, and can go late into the night, sometimes ending around 2 a.m.

At these dances you can catch shy teenagers grabbing their friends to go up to dance, young children giggling at each other, women sitting around sharing stories and young men learning from the older men on how to drum.

All are welcome to attend these winter celebrations.