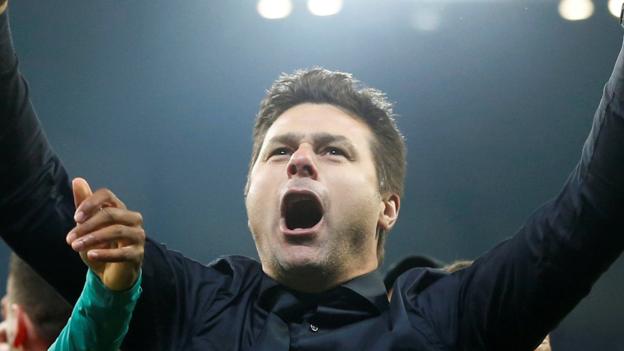 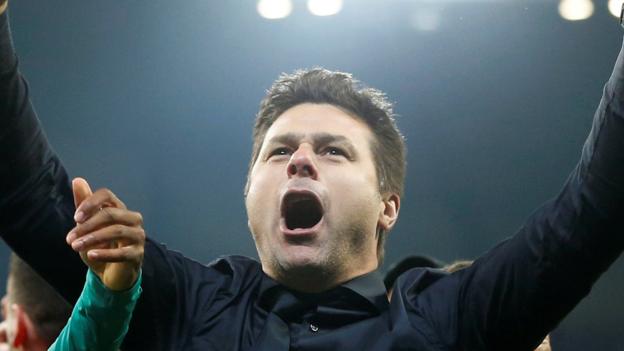 Tottenham boss Mauricio Pochettino described his players as “heroes” after they sealed a stunning 4-4 away-goals win at Manchester City to reach the last four of the Champions League.

In a remarkable game at Etihad Stadium, Spurs lost 4-3 but went through having won the first leg 1-0.

“To be in the semis was a dream. Now we are there. My players are heroes.”

Pochettino said victory ranked as “one of the most best” of his managerial career.

“It is unbelievable to be in the Champions League in the quarter-final and beat Man City because in both legs it was very competitive and both legs were even,” he added.

“To score three goals here was not easy. In a game that is like a final, it is difficult to see Manchester City concede the goals they conceded today.”

Asked if his side could win the Champions League, Pochettino said: “Today we show and last week against Manchester City that all is possible in football.

“Sport always gives you the possibility to beat teams that no-one believes or thinks we are capable of.

“Football is not only about talent but belief and to have the right mentality. This team has the personality, character and mentality to believe all is possible.

“With the quality, we can have this type of performance and achieve these big things. If not, it’s impossible.”

‘That is why we love football’

City were leading 4-2 and heading through with just over 15 minutes to play before Fernando Llorente scored to hand Spurs the away-goals advantage.

The ball seemed to make contact with the Spaniard’s elbow before coming off his hip and beyond Ederson, but the goal stood after a VAR review by referee Cuneyt Cakir.

In injury time, Raheem Sterling appeared to claim the winner as the Etihad erupted in celebration, only for the goal to be ruled out by VAR after Sergio Aguero was adjudged to be offside in the build-up.

Pochettino said he went through a mixture of emotions during the final moments as “No goal, VAR, offside” flashed up on the big screen to confirm that Sterling’s goal had been overturned.

“In a moment many things happened in your head and the disappointment was massive, but they changed the decision,” the Argentine said.

“That is why we love football. Today we showed great character and great personality. It was an unbelievable game.”

Despite having been a critic of VAR, Pochettino said: “You have to trust the VAR when it is against or for you.

“The decision to include VAR in football is going to change the game.”

Tottenham forward Son Heung-min, who gave the visitors a surprise early lead with two goals in three minutes after Sterling’s opener, said it was an unforgettable game.

However, the South Korean will miss the first leg of the semi-final after picking up a yellow card in Manchester.

“I have never seen something like this,” said Son. “It was tough and crazy but we are very proud of our team-mates. It was madness.”

Midfielder Christian Eriksen said he “must be one of the luckiest guys on the planet” after Sterling’s late goal was ruled out after the Dane’s misplaced pass gave possession away.

“I thought it was over,” said Eriksen. “Thank god the ref gave offside.”