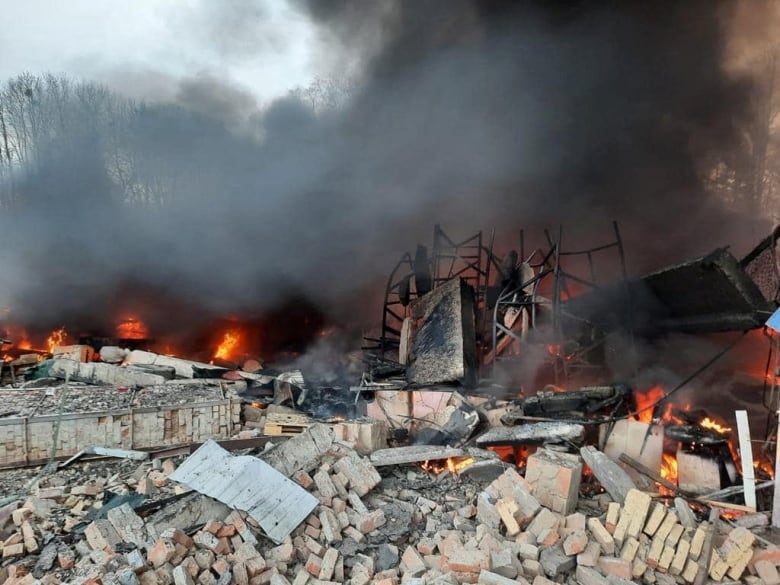 Torontonians of Russian descent are watching the invasion of Ukraine with growing concern — not only for family and friends near the conflict zone, but also for what the military campaign will mean for the reputations of Russians abroad.

Early Thursday, Russia launched a widespread attack on neighbouring Ukraine following a declaration by President Vladimir Putin that he was ordering a “special military operation.” An estimated 100,000 people fled as explosions and gunfire rocked major cities. Dozens have been reported killed.

In addition to an array of economic sanctions announced against Russia by the U.S., Canada and other nations, the invasion has provoked condemnation and protests within Russia itself and around the world, including in Toronto’s Nathan Phillips Square where hundreds rallied Thursday.

“We feel very sorry and ashamed of the actions that Putin is taking in Ukraine,” said Natalia Moudrak, who was raised in Russia. She now calls Toronto home, and considers herself a “proud Canadian.”

Moudrak says she has been receiving messages from friends living in Russia ever since the military action started. She says they share her opposition to it.

“This is wrong. This is not right. We stand on the other side,” Moudrak said in an interview.

Toronto is home to more than 130,000 people who identify as Russian, according to Statistics Canada.

While some felt comfortable speaking out, some Toronto-based Russian businesses, cultural organizations and individuals declined to speak to CBC News for this story, with some expressing worry about a potential backlash against the Russian diaspora.

There’s “shock and disbelief” for Rabbi Mendel Zaltzman at the Jewish Russian Community Centre of Ontario on Bathurst Street south of Steeles Avenue West. But his main concern is the welfare of family and friends in the conflict zone.

“I have a close friend who’s a rabbi in a border city, who has, from what I understand, refugees coming into his city,” Zaltzman said in an interview. He added that a colleague at the centre has a close family member in the Dnieper region of Ukraine.

There’s concern as well at the Holy Trinity Russian Orthodox Church on Henry Street near College Street and University Avenue in downtown Toronto.

Archpriest Vladimir Malchenko says after several years of conflict over Crimea and regions in Eastern Ukraine, many Russians and Ukrainians at the church expected an escalation in the fight, but not this large.

“Absolutely not of this scale,” Malchenko said Thursday as Russian military forces assaulted wide swaths of Ukraine by ground, sea.and air with troops reported advancing on the capital, Kyiv.

He isn’t worried about the conflict creating a divide among congregants of Russian and Ukrainian background. He believes all are praying for a peaceful resolution.

“We all feel the sorrow of the Ukrainian peoples and we hope and pray that this conflict will come to an end and that no other countries will barge in to make the conflict even bigger,” he said.