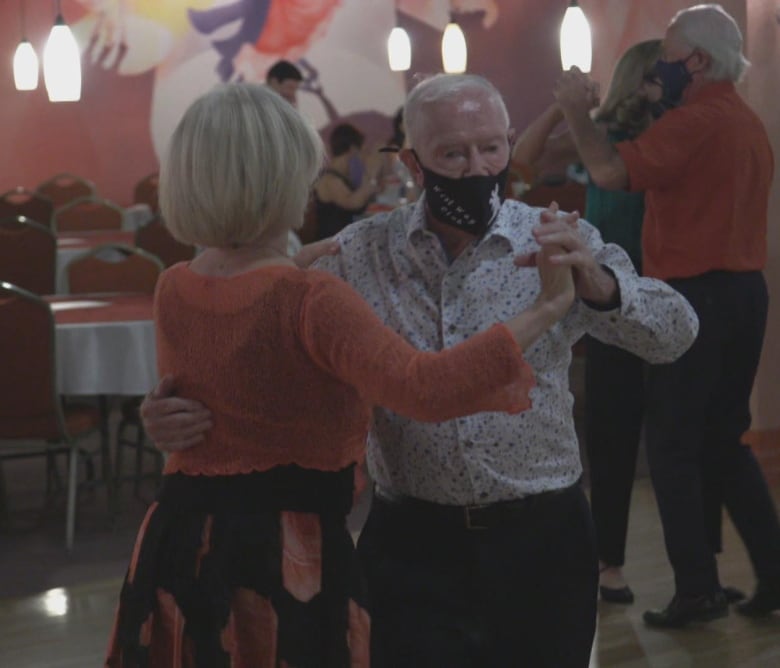 It’s a Wednesday afternoon, but inside an unassuming Etobicoke dance hall, it feels like Saturday night. While the dance floor is full — physically distanced, with dancers wearing masks — all eyes are on Harry Mitchell.

It’s his 100th birthday and this is how he wanted to celebrate: surrounded by family and friends, gliding on the dance floor.

“I’m governed to some extent by the condition of my knees, which have arthritis,” says Mitchell, shrugging with a smile.

Dancing through the decades

Mitchell grew up in Dundee, Scotland, with five brothers and one sister. He shares a mischievous grin, recalling meeting his first dates under a clock at the local pharmacy, before heading to the neighbourhood dance parlour.

After serving in the Royal Air Force during Second World War along with four of his brothers, Mitchell decided to take a chance and start a new life in Toronto. At 24, he was ready to build a life, and find love.

He met his wife Marjorie, on a blind date at the Boulevard Club on Lake Shore Boulevard West.

They danced the whole night.

“During the ride home, I thought the girl behind me had a nice, deep husky voice,” he remembered.

“So the next day after the dance, I went up to her house and knocked on the door and said, ‘Thank you for being my partner for the evening,’ so one thing led to another and another to …,” he paused, laughing. “And that was it.”

They married in January 1956, and soon their daughter Jean and son Andy arrived. Growing up, their family home in Scarborough was full of music, and plenty of dancing.

“I remember you were out at least two or three nights a week dancing or practising in the basement,” son Andy recalls, sitting next to his father.

Harry and Marjorie danced together through the decades.

But shortly after their 25th wedding anniversary, Marjorie got sick with cancer. Harry says the diagnosis came much too late. She died at 63 and Harry found himself without a partner in life and on the dance floor.

It was Andy who gave his father a gentle nudge to try dancing again.

Mitchell faced perhaps one of his toughest challenges when he was 97.

He was out for a walk in Cambridge, Ont., where he was living on his own, when he was hit by a car.

He suffered a brain injury, a broken jaw and neck. During his recovery, he had to wear a neck brace because his doctors feared any potential movement could leave him paralyzed.

While the ordeal was terrifying for the family, daughter-in-law Stephanie Crawford says Harry’s resilience was inspiring.

Sitting next to him during the interview with CBC News, her eyes misting with tears, she tells him one thing that really stays in her mind from early in his recovery when he still couldn’t move.

“You suddenly kind of had this fire in you and you said, ‘I can’t stay in this bed much longer because I’ve got to get strength back on my legs so I can dance again,'” she said.

Within several months, he was back on the dance floor, much to the relief of his longtime dance partner, Trudy Ulsrud.

“He’s just such a gentleman,” she says, her face flush from waltzing with Harry.

When asked if he has any wisdom to share on staying young at heart, he says this:

“There’s no real secret you can’t discover for yourself, if you’re content to take each day as it comes.”

He plans to keep on dancing as long as he can, and setting new challenges for himself.

His goal for the coming year is to ride his son Andy’s bicycle.

“It’s a big deal for me because I haven’t been on a bike for years, but I’m determined that I’ll do it and I will.”