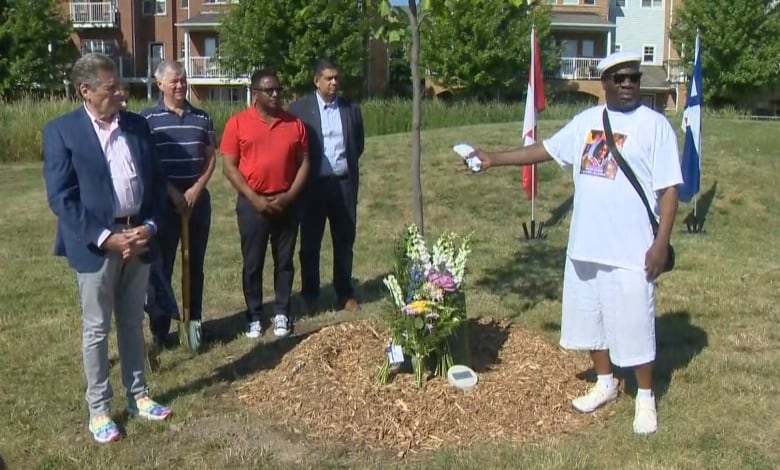 Toronto city officials and family members placed flowers at the base of two newly planted trees on Saturday in memory of two people killed in the Danzig shooting in Scarborough 10 years ago.

Shyanne Charles, 14, and Joshua Yasay, 23, died on July 16, 2012, when gunmen opened fire at a block party at a Scarborough housing complex. More than 20 people were injured. The shooting shocked Toronto.

The trees are located in the Port Union Village Common Park, near Port Union Road and Lawrence Avenue East. The shooting happened some distance away on Danzig Street. A ceremony was held in the park on Saturday in honour of the victims.

Tyrone Charles, grandfather of Shyanne, said at the ceremony that Shyanne left her family with many memories.

“The tree represents hope, life, happiness, freedom,” Charles said. “Today is one of these days that we remember her in a bright way, not as death. We remember her as life.”

Charles thanked city officials for attending the ceremony. He said he feels good that people did not forget his granddaughter.

Later, Charles said: “In our hearts, she is still alive.”

“No family in Toronto, no citizen, no resident, nobody who lives here should have to — on a happy, family occasion, summer, winter, spring or fall — worry about gun violence as something that is a reality that they face as they go about trying to live a family life,” Tory said.

Tory said the shooting was “jarring” and it has left scars. But he said it is important to have hope and determination to prevent further violence.

Later on Twitter, Tory said: “Today, we gathered in Port Union Village Common Park to remember the victims of the 2012 Danzig tragedy. While there, I shared my deepest sympathies and ongoing support to the family of Shyanne Charles.”

McKelvie said the community remembers Charles and Yasay. “Ten years later, we continue to hold them, and the Danzig community, in our hearts,” she said on Twitter.

The city’s website said the Toronto sign was dimmed on Friday night in memory of the victims of the Danzig shooting and other victims of gun violence. The city said it was to be dimmed on Saturday night as well.

This morning at the Port Union Village Common, the <a href=”https://twitter.com/cityoftoronto?ref_src=twsrc%5Etfw”>@CityOfToronto</a> planted two trees in memory of Shyanne Charles and Joshua Yasay. <br> <br>Ten years later, we continue to hold them, and the Danzig community, in our hearts. <a href=”https://t.co/s9XvaywP98″>pic.twitter.com/s9XvaywP98</a>