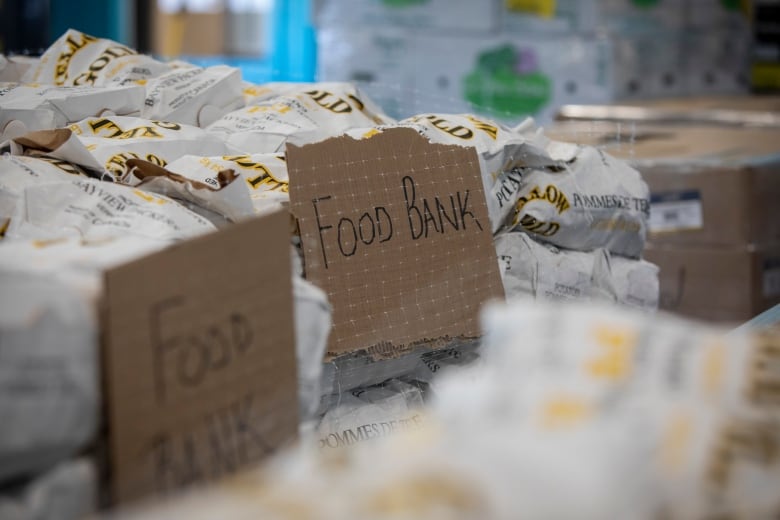 Toronto resident Alda Arthur started visiting the Spadina-Fort York Community Care food bank for the first time in September of last year when it became clear that she couldn’t afford all her expenses on a fixed pension.

Mobility challenges caused by osteoporosis also made travelling to the grocery story too difficult for the 86-year-old, who gets around with a walker.

Since then, Arthur has made almost weekly trips on Saturday afternoons to the location inside her building on the Esplanade in the St. Lawrence Market neighbourhood to collect staples like bread, cheese and fresh vegetables, along with non-perishable food items.

“It’s been great to have access to food like that, and also some of the things that you normally wouldn’t [buy yourself],” said Arthur.

Arthur is one of tens of thousands of people who used a Toronto food bank for the first time last year, when COVID-19 lockdowns and mass layoffs — compounded by the high cost of living — left many more people unable to afford the essentials of life.

In a first for Toronto, new clients outnumbered existing users at the city’s network of food banks and community food programs, according to this year’s Who’s Hungry report from the Daily Bread and North York Harvest food banks, released today.

Since 2016, the report shows, the number of new households relying on food banks each year has hovered around 15,000 or just over. However, between Apr. 1, 2020 and March 30, 2021 — the period examined in the report — 30,000 households used food banks and community food programs for the first time, compared to roughly 21,000 users that were already relying on their services in previous years.

Moreover, the report found that there were 1.45 million visits to Toronto food banks during that period. That’s the most ever recorded in the city’s history, representing a staggering increase of 47 per cent compared to the same period the previous year.

Data for the report was collected from the Link2Feed database, which tracks client intake data and visits. The survey findings come from 1,500 phone and online surveys conducted in six different languages, and 17 in-depth interviews with clients.

According to the report, COVID-19 acted as an “acute shock” that revealed pre-existing inequities and vulnerabilities within the city’s economy. For people living with “chronic stressors” such as low or fixed incomes and a lack of access to affordable housing, job losses and increasing costs sent many to the food bank.

As a result, food banks saw a significant rise in first-time visits, while many existing clients saw their need increase.

“While COVID-19 began as an acute shock, the health and economic impacts have become long-lasting stressors, particularly among marginalized communities who face persistent inequities,” the report reads.

Survey respondents had a median adjusted income of $1,106 per month, which is around half of Toronto’s Market Basket Measure (MBM), Canada’s official poverty line.

More than half of respondents reporting missing a meal to pay for something else, while one third said there were days when they didn’t eat anything at all.

As with the spread of COVID-19 itself, people from Black, Indigenous and racialized communities were disproportionately represented among food bank clients. Food insecurity for these groups is rooted in colonialism, anti-Black racism and other forms of systemic discrimination that reduce their access to housing and income, the report says.

Respondents living with disabilities and long-term health conditions reported greater food insecurity than others, the report said, along with challenges shopping at stores because of long lines and limited hours.

Neil Hetherington, CEO of the Daily Bread Food Bank, called the report’s findings “devastating” and “horrific.” What’s worse, he said, is that the upward trend is expected to continue.

“It was June of this year that the largest number of food bank visits ever recorded happened in a single month, and that was just under 125,000 clients.”

Some of its recommendations include financial support for renters, expanding access to affordable housing and increasing social assistance payments, including the Ontario Disability Support Program (ODSP).