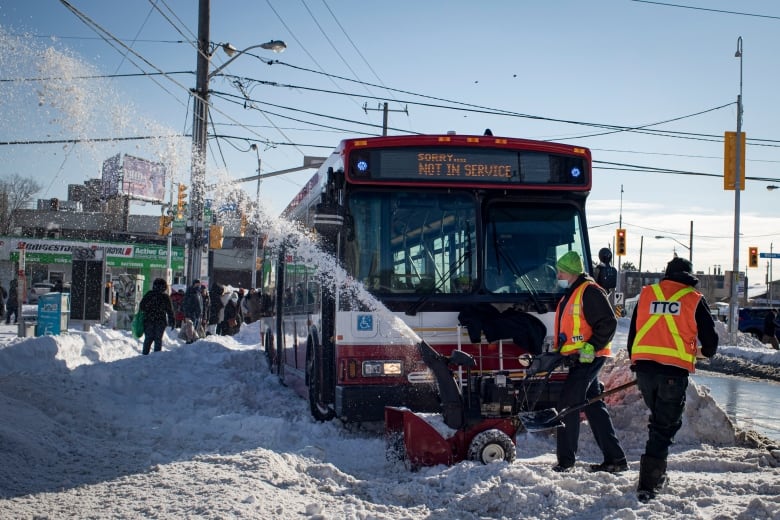 The Toronto area is digging itself out after a major snowstorm that crippled roadways and delayed the much-anticipated return to in-person schooling Monday, but it may still be several days before things are cleaned up.

For many school-aged children in Toronto, Tuesday marked a second snow day.

While classes went ahead virtually on Monday, the Toronto District School Board (TDSB) said there would be no live remote or virtual learning Tuesday. Schools will reopen to in-person learning on Wednesday.

Meanwhile, the cleanup on the 400-series highways continued through much of Tuesday, with cars abandoned cars in some areas according to Ontario Provincial Police spokesperson Sgt. Kerry Schmidt.

By 5:15 p.m. ET, the Ministry of Transportation told CBC News all stuck vehicles had been cleared.

Schmidt said there were more collisions on Tuesday than Monday because more people were out on the still-slippery roads, driving at higher speeds with the worst of the weather over.

That also complicated the cleanup, he said.

“I wish we could have had one more day of people staying home and allowing these operators to get these roads cleared,” Schmidt said.

Some stuck on highways for over 9 hours

Airport taxi driver Sukhi Sidhu was stuck on Highway 401 for some nine and half hours on Monday. He says the 401 should have been shut down, like the city’s Don Valley Parkway and Gardiner Expressway.

Closing those routes was “a brilliant idea,” he said. “They should have done it for the 401.”

By Tuesday morning, some 600 road plows, 200 salt trucks and 360 sidewalk plows had completed 11 rounds of plowing on expressways and 14 rounds on major roadways, Toronto Mayor John Tory said, with the work continuing around the clock.

But with the sheer amount of snow and many abandoned vehicles, digging out won’t be easy.

As for transit services, hundreds of Toronto Transit Commission buses are still stuck, and being manually dug out after plows were forced to go around them. At the height of the storm yesterday, some 500 buses had been caught in the snow.

The union representing approximately 12,000 TTC workers called on the transit commission to come up with a plan to better manage snowstorms after what it called its “disastrous” response Monday.

“As a result of the TTC’s lack of planning, many workers and riders on 540 vehicles were left stranded on roads for eight to 10 hours yesterday. The TTC’s communication system was ineffective. Calls from trapped operators were left unanswered,” the Amalgamated Transit Union Local 113 said in a statement.

The union says it wants to see the TTC set out a “hazardous service level” so that once snowfall amounts reach a certain threshold, the TTC must pause service to allow road crews to work and clear the roadways.

Spokesperson Stuart Green said the TTC is “always learning from events like this and we will learn from this one,” adding that Monday’s snowfall was unusally heavy.

“I think … everybody appreciates that it was unprecedented,” Green told CBC News.

He said some 300 to 400 buses were still stuck as of Tuesday morning and, it is hoped, will be dug out over the next day or so.

There is no subway service on Line 1 between Sheppard Avenue West and St. Clair West because of the weather. The Scarborough LRT is also shut down, with buses running along the route instead.

“Our crews are working overtime to get as many of these vehicles back into service as soon as possible but it’s going to be a bit slow-going at least for today,” Green said.

“Customers can expect that every surface route will have some impact, whether it’s a slight delay or a slightly longer delay… That’s just as we work through all of this and as the roads get cleared.”

As of Tuesday morning, GO trains were running all seven routes, albeit fewer of them.