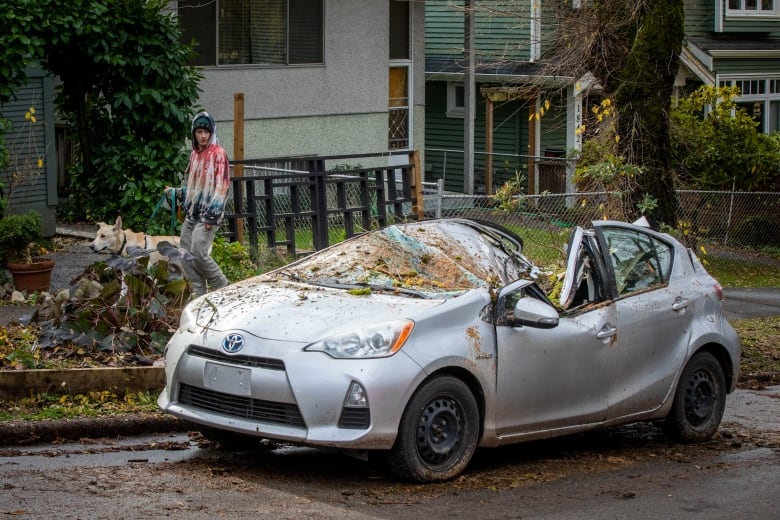 Environment Canada has confirmed that a tornado moved through the University of British Columbia (UBC) during Saturday’s storm — the first in the City of Vancouver in over five decades.

The weather agency, along with the Northern Tornadoes Project, conducted an onsite storm damage survey Sunday and preliminary results concluded that a tornado impacted the University Golf Club around 5:10 p.m. on Nov. 6.

On Saturday evening, a rare and brief tornado watch was issued for Metro Vancouver and Howe Sound, which lasted around 24 minutes.

A waterspout, which happens when a tornado forms over water, was spotted off the coast near Vancouver International Airport (YVR).

Environment Canada has now confirmed the waterspout was the same cell that moved through UBC, bringing strong winds that damaged trees, blocked roads and disrupted traffic.

How did it happen?

Bobby Sekhon, a meteorologist for Environment and Climate Change Canada, said it took the perfect conditions for Saturdays’ tornado to form.

“We had a cold trough of low pressure off the west coast of B.C.,” he said.

“We also had some relatively warm ocean water, then adding a little bit of spin in the atmosphere, and the conditions were just right to form that tornado just west of YVR, which eventually made its way into UBC.”

Once the tornado hit the university campus, it brought hail, rain and strong winds of 90 to 110 kilometres an hour, Environment Canada said.

How rare is it?

It’s a weather event that Sekhon says is “quite a rare occurrence.”

Sekhon said the last reported tornado that touched down in the City of Vancouver was 54 years ago — in 1967, though there was one recorded in Pitt Meadows in 1991.

“In the Vancouver area, there’s really only been seven reported tornadoes in the past 70 years … and especially to have it in November is extremely rare,” he said.

The weather in November is cooler, said Sekhon, which doesn’t provide the right conditions for cells that might produce tornadoes. He said tornadoes tend to happen more in the spring or summer seasons.

How strong was it?

The storm damage survey found the tornado to be classified as EF0, the lowest in the Enhanced Fujita scale, which measures a tornado’s intensity based on estimated wind speeds and related damage.

The highest classification is EF5, which represents the most catastrophic tornadoes.

“In the tornado damage survey, basically, we look for things like tree damage. What part of the tree was damaged? What kind of trees were damaged? Which way did they fall? We look for any other signs of damage [of] infrastructure, any injuries, fatalities, that kind of thing,” Sekhon said.

Crews also collect eyewitness accounts and social media reports, along with information from meteorological radars and satellites to confirm the strength of tornadoes.

“Remember, it’s best to get inside in a basement if you can. Or on to a main floor away from exterior walls and windows … to try and stay safe while the tornado passes,” he said.