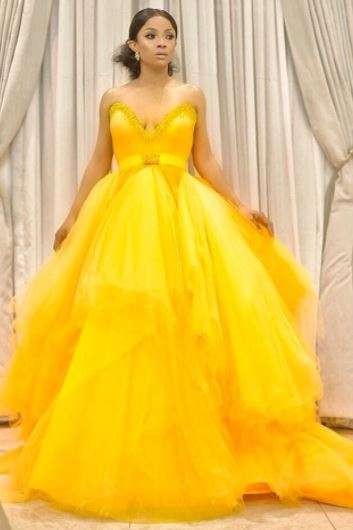 The gist making the rounds right now is that Toke Makinwa is dating a 70-year-old man.

It is alleged that the man in question is known as Dr. Fadeyi. However, Toke Makinwa has refused to react to the latest reports.

She took to her Instagram page where she said she really didn’t care, that people can take their assumptions and start a campaign with it if they like.

It would be recalled that Toke Makinwa had on March 9, 2016, asked the court to dissolve her marriage to ex-husband Maje Ayida on the grounds that he committed adultery.

She said since their marriage was contracted, the husband had behaved in a way she could not reasonably be expected to continue to bear.

In her favour, a Lagos High court dissolved the marriage between Toke Makinwa and her ex-husband, Maje Ayida,  citing Maje’s adulterous lifestyle as the major reason for the dissolution of the marriage.

Justice Morenike Obadina, while delivering judgment held that Ayida filed an answer to the petition but did not give oral evidence in support of it. The judge also said Makinwa had sufficiently proven that the husband committed adultery and continued to flaunt his adulterous relationships even to her face.

Share
Facebook
Twitter
WhatsApp
Pinterest
Linkedin
ReddIt
Email
Print
Tumblr
Telegram
Mix
VK
Digg
LINE
Viber
Naver
Previous articleDavido How singer lost 3 friends in one week We take a look at the tragic way Davido lost three of his friends a space of one week.
Next articleSee the Kardashians Then and Now