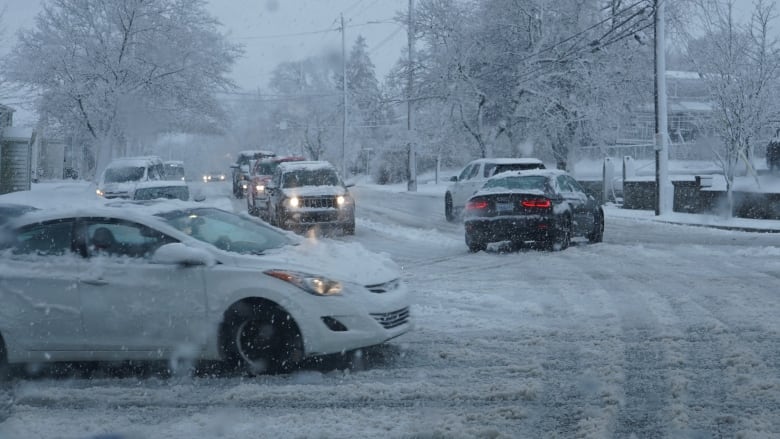 Thousands of homes and businesses are without power Saturday after a powerful winter storm swept Nova Scotia.

The first nor’easter of 2022 started Friday, dropping from five to 45 centimetres of wet snow across the province throughout the day and overnight, with wind gusts between 70-100 km/h.

CBC meteorologist Ryan Snoddon said initial reports show that northern parts of the province received the most snow, with 45 centimetres falling in Wentworth.

Some areas of northern Cape Breton are still under a winter storm warning and are expected to get an additional five centimetres of snow mixed with high winds.

By Friday evening, those high winds and heavy snow had already knocked out power to about 66,000 Nova Scotia Power customers.

As of 10:30 a.m. AT, there are still about 37,000 customers without electricity across the province, according to Nova Scotia Power’s outage map.

Most of the outages are located in the Halifax Regional Municipality, the Annapolis Valley and areas along the Bay of Fundy coast.

He said crews have found a few broken power poles but the majority of the outages were caused by heavy snow weighing down tree branches onto power lines.

“The most challenging aspect has been travel. In some areas, it is slow going with all the snow on the road and safety is our number one priority … but they’re doing everything they can to quickly restore power for all customers,” he said.

Drover said he doesn’t expect more weather-related outages but there could be some minor outages as areas are being restored.

He said communities would be restored first, followed by streets and individual properties.

Good morning from our teams in the field! <br><br>Our crews continue to make progress in restoring power to our customers following the winter storm that brought heavy, wet snow, high winds and rain to the province. (1/2) <a href=”https://t.co/27NJfaH4FI”>pic.twitter.com/27NJfaH4FI</a>

Drover said the utility has restored electricity to more than 76 per cent of customers who lost it during the storm.

“I want to thank everybody across the province for being patient. It was definitely a major storm and we’re working as safely and quickly as we can to get your power back on,” he said.

He said he expects most of the outages will be restored by 11 p.m. Saturday.

According to Nova Scotia’s provincial highway map, the Cobequid Toll plaza in Cumberland County was closed to traffic for several hours after it was shut down Friday during the storm. It reopened early Saturday.

Marine Atlantic has also cancelled several crossings between North Sydney and Port aux Basques and rescheduled them to late Saturday or Sunday due to the weather conditions.

Several flights out of the Halifax Stanfield International Airport were also cancelled Saturday morning due to the storm.