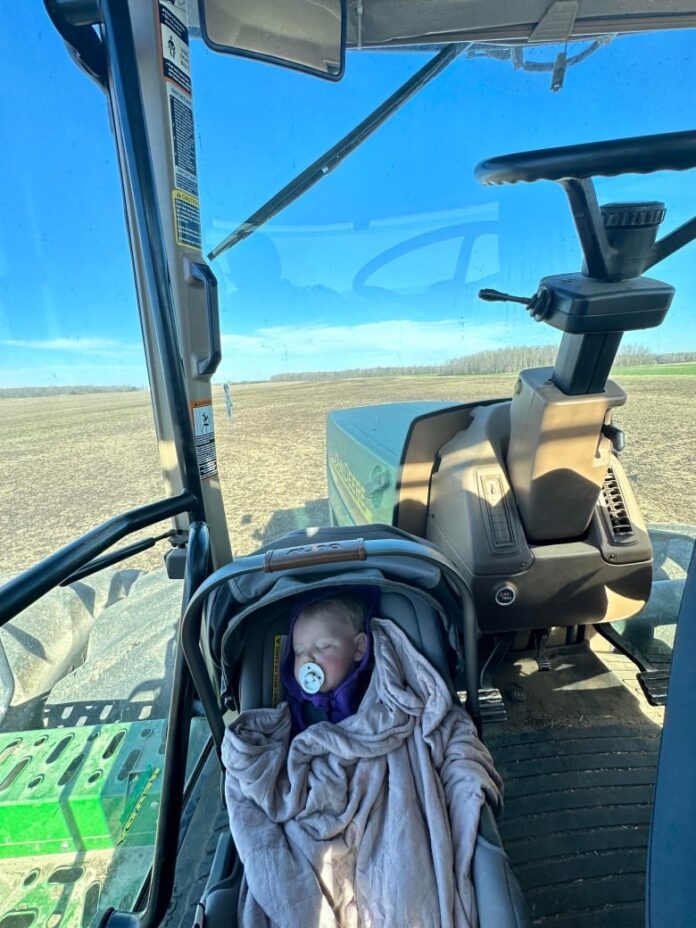 Third-generation dairy farmer Shelby Carson of Listowel, Ont., knew things would change when she gave birth to her daughter nine months ago, but stepping away from the farm was never an option.

“I’m not much of an office person,” said Carson, 28, who runs David Carson Farm and Auction Services Ltd. with her partner, Johnny Franken, and her father and grandfather.

A photo showing Carson’s nine-month old daughter Audrey sleeping soundly in her car seat inside a John Deere tractor in early October has been turning heads on social media recently.

“That day, we were out there all day.” said Carson who had been plowing an old hay field that was left dormant this summer.

“That field was a worm field and we were ripping it up. And yeah, I had my daughter along.”

Audrey napped for two or three hours that day, she said.

“She loves it, since she was little. As soon as she gets into a piece of equipment, she just falls asleep,” said Carson who also recalls taking Audrey out when she was six weeks old to spread manure.

Statistics Canada’s latest census release on the state of agriculture in Canada found the number of women operating farms has increased since 2016. According to the data, in 2021 79,795 women counted themselves as female farm operators, compared to 77,970 five years earlier.

Farmers are dedicated and determined. Mothers who farm are no different.– Peggy Brekveld, Ontario Federation of Agriculture president and mom of 5

“Farmers are dedicated and determined,” said Ontario Federation of Agriculture president Peggy Brekveld who operates a dairy farm near Thunder Bay. “Mothers who farm are no different.

“When mine [her children] were little, they were in a stroller watching us milk cows. Others have them in the market garden on their backs,” said Brekveld, a mother of five.

Brekveld’s children learned to ride bikes in the alleys of the barn, she said.

“Kids learn as they live among us on the farm. They learn about animal behaviour, and hard work, and how to work the soil and treat it well,” she said.

It’s a story as old as time, Brekveld mused.

“Shelby is an amazing lady and so hard working,” said Carson’s partner, Johnny Franken. “For her to keep going and take Audrey to work isn’t easy, but she does it every day.”

Carson and Franken live about an eight-minute drive from the farm, where her grandfather still lives.

Carson admits farming while being a mother is a bit hectic, but she enjoys it.

“I feel like that’s just what I’m supposed to do. I just enjoy it. It kind of comes natural.”

So what will Carson do when Audrey’s walking?

“I’m actually excited for her not to be in a car seat anymore and can just sit in the buddy seat [of the tractor] without a car seat.”