These parents went into debt to get their children private, long-term drug treatment 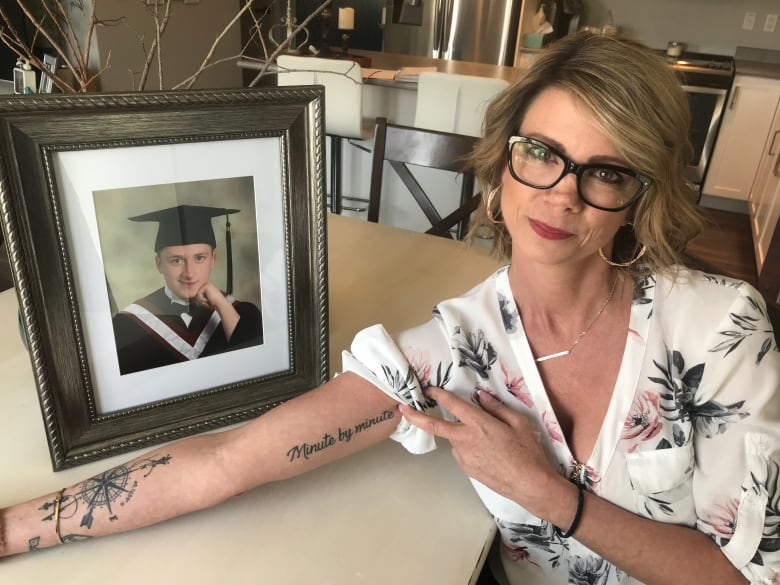 Kaden Bereza, 24, became addicted to opioids when he was 16. His mother, Stacey Bereza, right, cashed in her retirement savings and racked up debt to pay for his private treatment. (Stacey Bereza)

Some parents of drug-addicted children are cashing in retirement savings, remortgaging houses and sinking into debt to pay for privately run, long-term drug treatment.

It’s an expensive gamble, but one they are driven to take after growing frustrated with the lack of publicly funded treatment programs that extend longer than 28 days.

“My son wasn’t my son for years and this was the hope of getting my boy back,” said Stacey Bereza, a Saskatoon woman who paid $82,000 for private treatment for her son, Kaden, in British Columbia.

The majority of Saskatchewan’s 350 treatment beds are for detox or 28-day programs. There is some flexibility, usually a couple weeks, but only nine beds for adults in the province are dedicated to residential treatment of 90 days.

The province says long-term treatment is available by accessing a patchwork of different services — detox, inpatient treatment, transitional beds, outpatient counselling — but often with gaps in between.

“We’re setting them up for failure,” said Dr. Peter Butt, a leading addictions specialist in Saskatchewan.

The 28-day model that has become standard in Canada was a misguided replica of the U.S. system, says Butt. 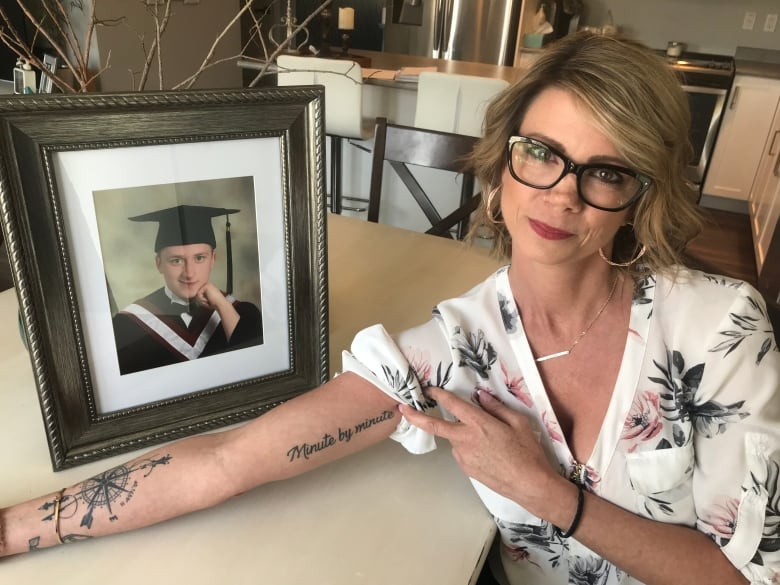 Stacey Bereza tattooed the phrase ‘minute by minute’ on her arm, a mantra that she and her son use for his drug addiction recovery. (Bonnie Allen/CBC)

As epidemics involving opioids and methamphetamine have spiked in recent years, shining a spotlight on the reach of substance abuse, there have been calls to have addiction talked about as a chronic disease, similar to diabetes or cancer — and treatment reflect as much.

Butt is blunt that there is no one-size-fits-all, cookie-cutter solution for drug treatment. But he says it should include a minimum of three months of continuous treatment — although not restricted to residential facilities — followed by transitional support that lasts at least one year.

“It’s absolutely a national issue. Every province struggles with this. You might have projects or programs or places where there’s an oasis of good practice … but in terms of a provincial-wide, sustained system of care, we have yet to see it in the country,” Butt said.

Kathy Willerth, director of mental health and addictions with Saskatchewan’s Ministry of Health, says her goal is to close any gaps in the province’s system and guarantee “90 days of engagement” with “a warm handoff” when people move between treatment services. A recent budget increase will add 50 transitional beds, she said. 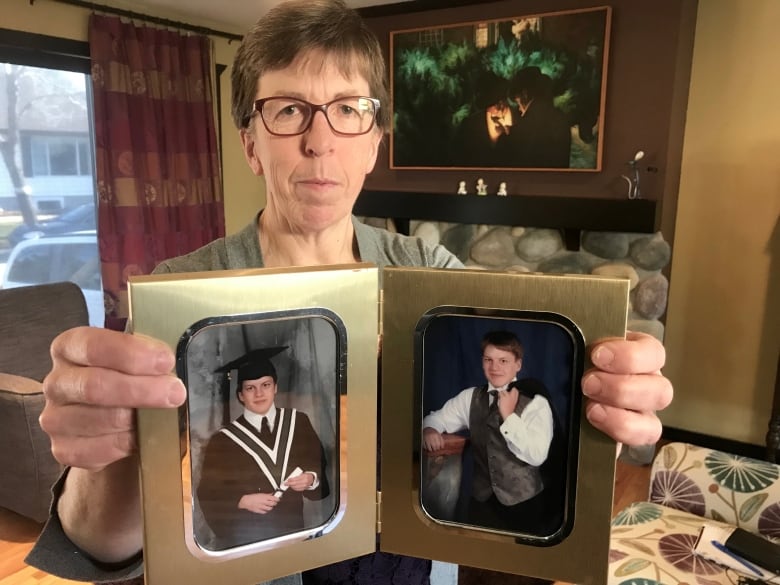 CBC News spoke to multiple women in Saskatchewan who described the heartbreaking and financially crippling impact of having a child fall through the cracks.

Andrew Nordal admits he would lie, steal and bully his mother, Ronni, in a bid to get money to buy drugs.

“I knew how to push my mom’s button and get what I wanted,” said the 30-year-old. He became addicted to cocaine in high school and later, crystal meth.

“I would steal. I would manipulate my family for money.… I was dealing drugs. I was breaking in drug dealer’s houses to get drugs.”

Ronni Nordal repeatedly arranged for her son to get counselling and drug treatment in Saskatchewan’s public health system. He completed a 28-day program in Saskatoon three separate times. On the last stint, he was allowed to stay a couple of extra weeks.

Each time, he relapsed.

His parents were at their breaking point.

“I was exhausted,” Ronni Nordal said. “And I couldn’t fight it, and I didn’t know what to do.

“We both loved him with all our hearts. But at some point, we were going to have to not have him in our lives. And we came to the conclusion that for us to be OK with ourselves, we were going to try one more thing.” 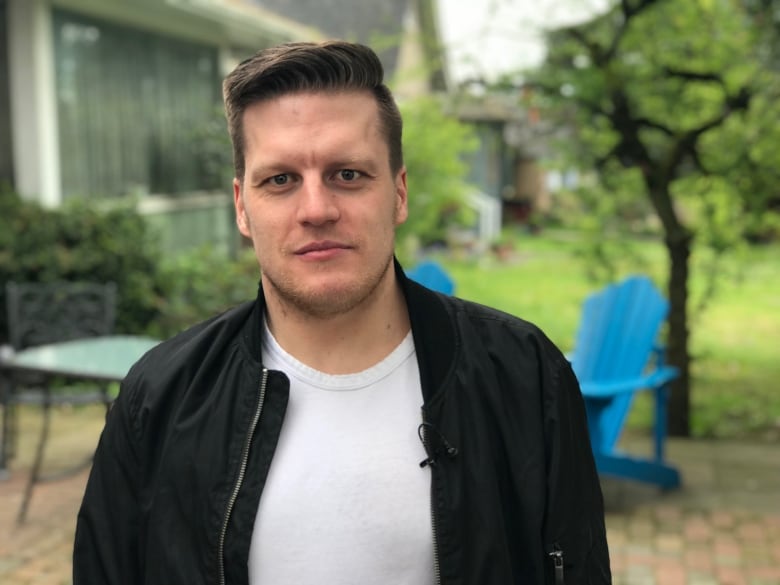 Former crystal meth user Andrew Nordal, 30, tried a 28-day drug treatment program in Saskatchewan three times. At the end of 28 days, he said he could still feel the effects of the drug and wasn’t able to learn how to change his behaviour. (Glen Kugelstadt/CBC)

That one more thing was private, long-term residential treatment in B.C. Nordal was quoted between $7,000 and $12,000 a month. Nordal, a lawyer, did as much research as she could online, but was leery of unregulated private facilities.

Andrew’s story so far is one of success. In October 2016, he began five months of intensive residential rehab at the Last Door Recovery Centre in New Westminster, B.C., followed by several more months of counselling and after-care in the facility’s transitional housing program. He’s been clean for 2½ years.

‘This was the hope of getting my boy back’

Stacey Bereza’s son, Kaden, 24, experimented with painkillers from a medicine cabinet in high school, then moved on to heroin and fentanyl.

As a 911 dispatcher for the Saskatoon Police Service, Bereza had handled plenty of overdose calls at work. She was determined to get her son help — and fast.

An addictions counsellor in Saskatoon urged Bereza to skip the waiting lists and 28-day programs, she said, and immediately book her son into a private facility in B.C. She convinced Kaden to give it a try. 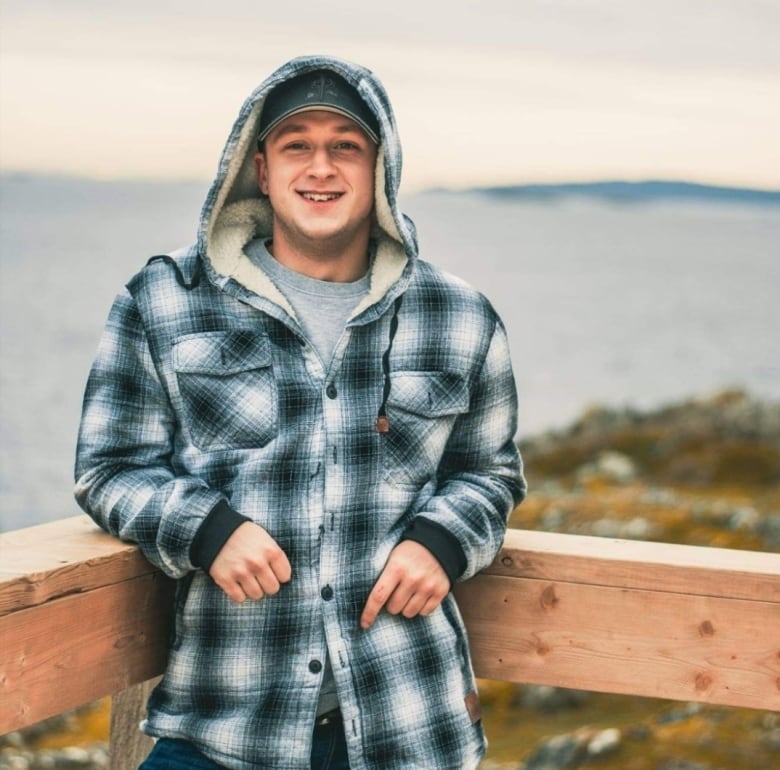 Kaden, a Saskatoon native, stayed in Nanaimo, B.C., after receiving months of inpatient and outpatient treatment at the private facility, Edgewood Treatment Centre. He had three relapses but has been clean for nearly three years. (Stacey Bereza)

She flew with her son to Nanaimo, B.C., where he received medically supervised detox and intensive inpatient treatment at Edgewood Treatment Centre, which also has facilities in Toronto and Montreal.

As is common, Kaden’s recovery has included three relapses. But he’s been clean for nearly three years and still receives regular counselling at the facility — paid for by Bereza.

“Credit cards, line of credit — it’s a monthly financial crunch. I feel it monthly. But I look at my son’s smile today and it was worth it,” Bereza said. 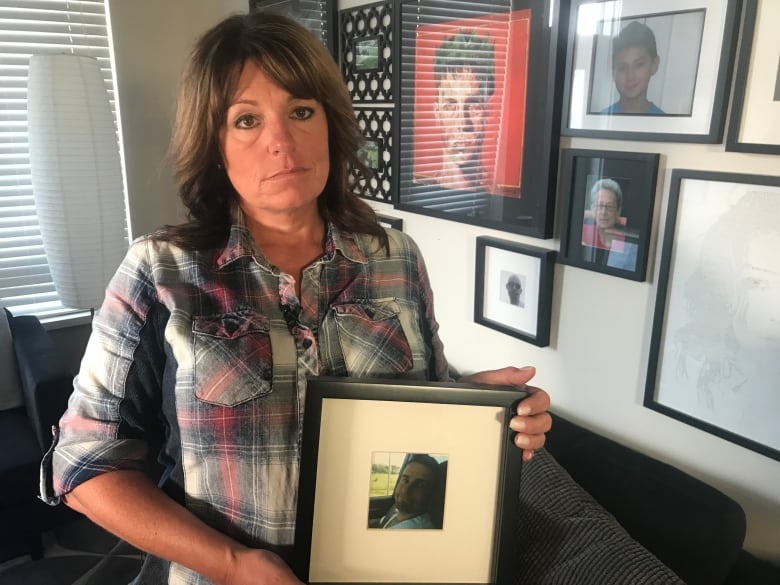 Cheryl Deschene beat down a drug dealer’s door, holding a baseball bat, to find her son, Jordan. But she struggled to find a bed for him in a treatment facility. He died of an overdose four years ago. (Bonnie Allen/CBC)

‘I spent a lot of time swearing’

Cheryl Deschene’s rough-around-the-edges son, Jordan, first experimented with crack cocaine when he was 13.

She spent his teenage years visiting him in juvenile detention centres or hunting him down on Regina’s streets. She wasn’t afraid to beat down a drug dealer’s door, holding a baseball bat, demanding to see her son.

“No one wants mama rat-a-tat-tat at their door, especially when she’s mad,” Deschene said.

More often, though, she felt frustrated and helpless.

While her son was frequently incarcerated, she said there were windows of opportunity when he wanted help. She tried to get it for him — and failed.

Deschene was able to get her son into detox, but when he finished, there would always be a waiting list of four to six weeks for followup treatment programs.

“And when they want help, when they’re reaching out for help, it’s like now or never,” Deschene said. “It’s such a disjointed system. So, as a mom, on the phone, I spent a lot of time swearing, like, ‘Are you kidding me?'”

An urn in the bedroom

Paying for private treatment wasn’t a viable option for Deschene.

“I was a single mom. I could not afford to spend upward of $10,000, usually much more, to send my kid out of province. Would I have done it? In a heartbeat.”

In her bedroom, Deschene points to Jordan’s picture on the nightstand and an urn in the corner.

“Typically I say ‘Good night.’ Sometimes I call him a jerk for leaving me.”

Jordan died of an overdose four years ago, at 27, a day after he was released from the Regina Provincial Correctional Centre.

While Deschene acknowledges many factors contributed to Jordan’s death, she feels the public system failed her son.