These jeans all say they’ll fit a 34-inch waist. Here’s why most of them won’t 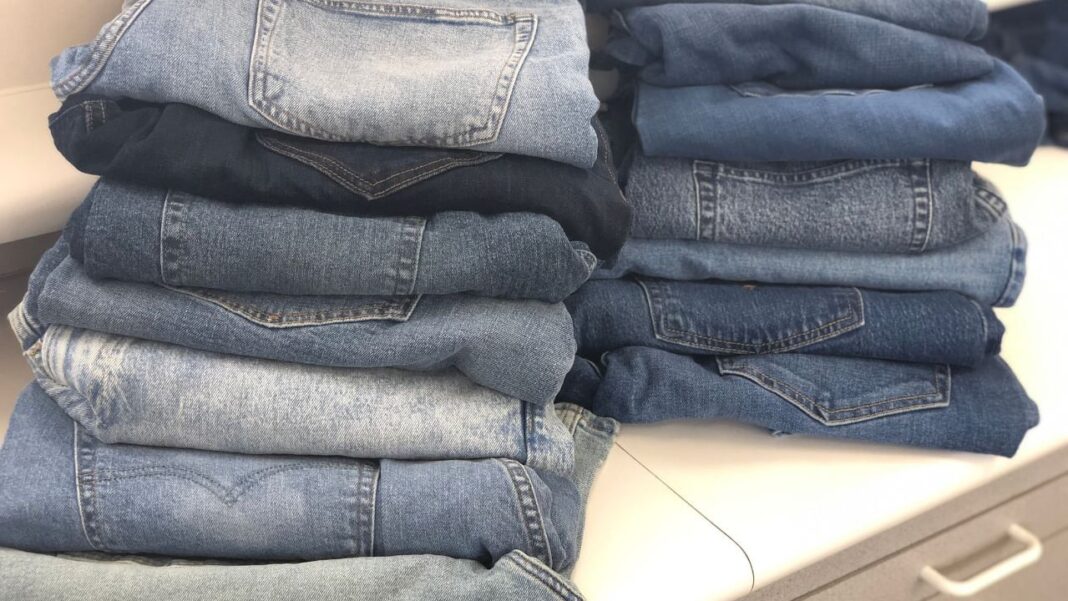 If you’ve had a hard time finding jeans that fit or figuring out your size, there’s probably a good reason why. Experts say it’s likely by design.

Marie-Eve Faust, a professor at the University of Quebec in Montreal in the department of strategy, social and environmental responsibility, measured and assessed jeans purchased from Levi’s, H&M, Gap, Lee, Wrangler, Old Navy and Abercrombie & Fitch — some of the most popular brands. 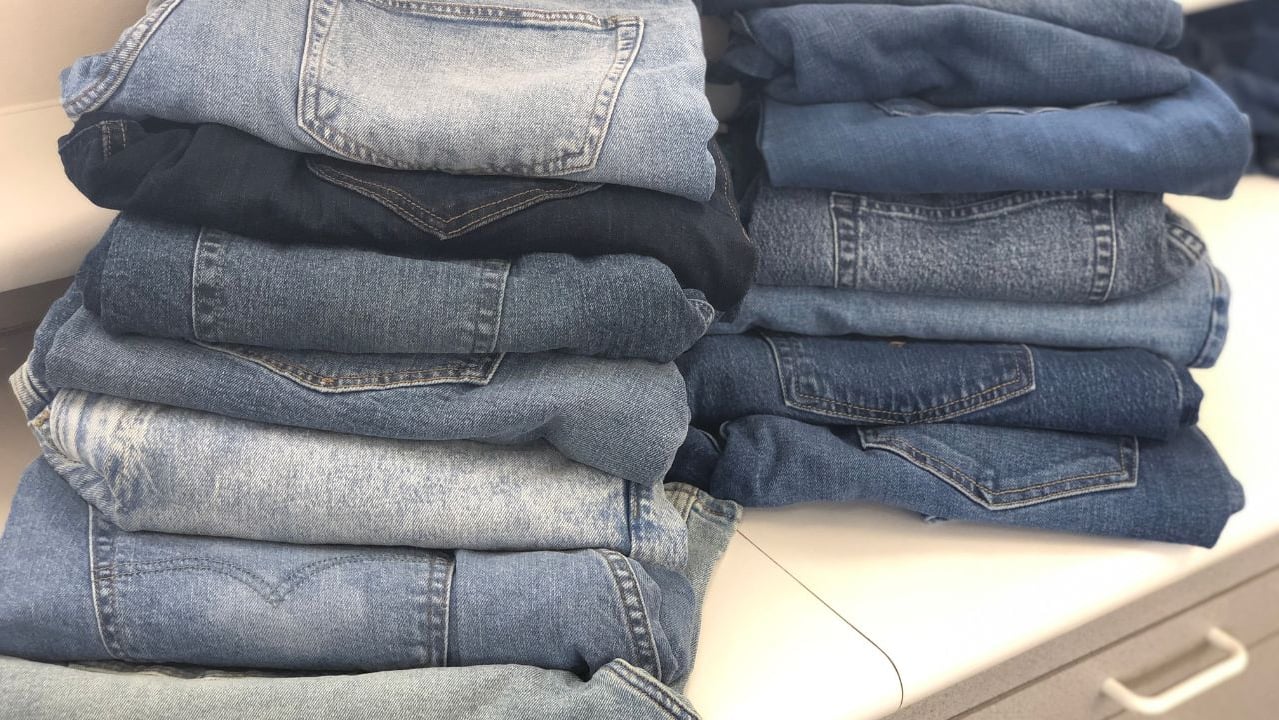 Putting jeans sizing to the test

We buy popular brands and have experts check how the actual size of the jeans measures up to what’s labelled.

The jeans were similar in style and sizes to fit the Canadian average, according to Statistics Canada, of a 34-inch waist circumference for women and 38-inch waist for men aged 25-59.

Marketplace found that most of the waist sizes in inches (the metric by which retailers advertise and label the jeans) were bigger by a minimum of an inch to much more.

‘To flatter your consumer’

Faust, who has published a number of studies on fashion management, sizing and fit, described vanity sizing as a marketing tool commonly used in fashion and not limited to jeans.

“To flatter your consumer, you would label it as a size smaller than it is,” she said, which makes it difficult for people to shop with confidence and ease.

“It’s very difficult for women to find out which brand is OK,” she said. “But at the same time, it flatters you.”

She said when people feel good about the size, they may purchase more as a result.

Clinical psychologist Nina Mafrici, who owns Toronto Psychology and Wellness Group, said this practice also has a danger to it.

“The problem with vanity sizing and with fooling people into believing that they are a smaller size, is really it connects a size, an objective measure — for instance clothing size or weight on a scale — with the person’s self worth,” she said.

And that leads to “low body image or low self-esteem and can contribute to eating disorders.”

Mafrici said she and her staff are seeing more clients than ever who are younger and have serious health issues like eating disorders.

In the Marketplace test, there were just two pairs of men’s jeans that were true to the size 38 labelled on the waist: Lee Athletic Taper Active Stretch and H&M Regular Fit (straight leg). The other men’s brands ranged from an inch to two inches bigger than their size guides.

In women’s jeans, all of the waist sizes were different from what was labelled.

Only Old Navy Extra Stretch High Rise Curvy O.G. Straight, labelled as a size 14, which on the company size guide is a 33.5-inch waist, was smaller at a 33-inch measured waist.

It was the only outlier of the entire lot. The women’s jeans purchased from Old Navy did not fit the pattern for vanity sizing. These were also among the least-expensive jeans.

All the others were bigger.

Some women’s sizes way off

Wrangler High Rise True Straight Fit and H&M Straight Regular Waist jeans were around two inches over what was listed on the size guide.

Levi’s Premium Wedgie Straight and Gap Cheeky Straight Sky High were about three inches bigger than what’s on the label.

Abercrombie & Fitch had the largest discrepancy between its label and the actual measurement during the Marketplace test.

Faust was surprised that the women’s Abercrombie & Fitch Curve Love High Rise 90s Relaxed Jean, which was advertised as a size 34, was actually 40 inches when measured. That’s a six-inch difference for one of the priciest pairs at $98.

The company markets its Curve Love jeans as having an extra two inches in the hips and thighs “to help eliminate waist gap.”

Sarah Muslim, who has a 34-inch waist and modelled the jeans Marketplace tested, said she considers herself curvy and constantly has trouble finding jeans that fit because there is often too much material at the waist.

The Curve Love jeans, she said, were “probably the worst-fitting ones out of all of them and they’re supposed to be for curvy girls.”

In a statement, Abercrombie & Fitch Co. did not explain why there was such a discrepancy in the waist of the Curve Love jeans that Marketplace measured.

However, a spokesperson wrote that “in the detailed size guide online, the numeric size labels of our jeans will not always correlate directly to waist measurement in inches, which is by design. In line with other apparel brands, we do not produce bottoms in inch-by-inch waist increments. Instead, based on extensive research and fit sessions, our sizing is intended to fit a range of waistlines.”

The spokesperson also wrote that “many other factors” go into denim sizing, including style, the amount of stretch in the fabric and where the waistline is intended to sit.

Muslim urged companies to not only put labels with both sizing and waist measurement information on their clothing, but to also ensure the information is accurate.

All of the companies were asked for their comments on both the discrepancies Marketplace uncovered in the measurements and for perspectives on vanity sizing.

Wrangler did not respond. Levi Strauss & Co. declined the opportunity to respond.

In a statement, H&M wrote that the company can’t comment on the specific jeans Marketplace bought, but it works to ensure it has the right size in every market.

A Gap Inc. statement for Gap and Old Navy said the company strives to provide consistent sizes but the design and material sometimes can lead to inconsistency.

Lee was the only company to apologize for the discrepancy in the fit and also the only one to mention an industry term called “garment tolerance.”

Garment tolerance refers to how much of a difference a company allows in measurements, and Lee wrote that its factories “are allowed a variance up to an inch.”

As for vanity sizing, H&M was the only company to respond directly. The company’s statement reads: “Vanity sizing is not something we work with at H&M.” It also said different items of the same size can be experienced differently depending on factors like style of the clothing.

Faust said standards were set for some garment sizing, including women’s clothing, in Canada in 1975, but they are now voluntary. Public Services and Procurement Canada confirmed in a statement that the “Canada Standard System for Sizing Women’s Apparel” was withdrawn in 2012.

Faust said mandatory sizing regulations are needed so customers are not misled or manipulated.

The companies refer to waist sizing in inches or centimetres on their websites or on the jeans themselves, yet the numbers are increasingly meaningless, Faust said.

Over the years, because of vanity sizing, companies have had to decrease sizing to the point that some have sizes as small as 0 or 00. Faust noted that numerical sizes that start at 00 can be just as inconsistent as the ones labelled by waist size.

Abercrombie & Fitch was among the first brands to make size 00 and now has size 000 on its website.

Faust remembers in the 2000s when she and colleagues, “Were like ‘oh my God, soon we’re going to be close to zero,’ and we were laughing about it.”

Lee and Levi’s both carry size 00 and H&M has size 0, which the size guides indicate are a 24-inch waist.

The British Standards Institution once regulated body measurement sizing in 1951, and Faust said the Canadian General Standards Board could regulate it now.

But in a statement to Marketplace, the government agency indicated that garment standards were withdrawn and “CGSB does not have expertise in this area.”

The statement suggested that “public or private organizations interested in developing a new national standard can contact the CGSB to obtain information on the development process.”

The retail psychology of vanity sizing doesn’t sell with Muslim.

“You should just embrace your size and get something that makes you feel good,” she said.

Mafrici says until companies consider changing their practices, “Do your research. Discover brands that are using accurate sizing. Focus on how clothes feel on your body and how you feel in it.”

And she encourages shoppers to go to “those brands that demonstrate size diversity.”