Theresa May on Trump comments: Far-right should always be condemned 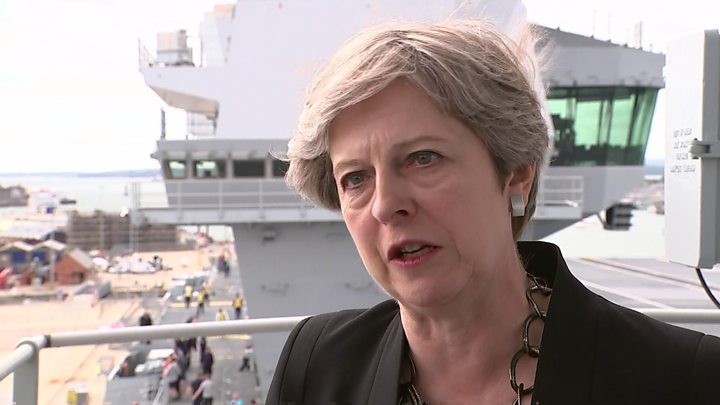 Theresa May has said it is important to condemn far-right views “wherever we hear them” as she was asked about Donald Trump’s response to clashes in the United States.

The PM said: “I see no equivalence between those who propound fascist views and those who oppose them.”

President Trump has faced criticism for blaming both sides for the violence in Charlottesville, Virginia.

A woman was killed when a car hit people opposed to a far-right rally.

The UK prime minister added: “I think it is important for all those in positions of responsibility to condemn far-right views wherever we hear them.”

She was speaking on a visit to Britain’s new aircraft carrier HMS Queen Elizabeth, in Portsmouth, her first engagement since her summer holiday.

Asked about Mr Trump’s response to the Charlottesville incidents, she said: “As I made clear at the weekend following the horrendous scenes that we saw in Charlottesville, I absolutely abhor the racism, the hatred and the violence that we have seen portrayed by these groups.

“And there is no equivalence.”

After widespread criticism of his initial response, Mr Trump had condemned white supremacist groups on Monday.

But at a press conference on Tuesday, he said there was “blame on both sides”.

“You had a group on one side that was bad,” he said.

“You had a group on the other side that was also very violent. Nobody wants to say that. I’ll say it right now.”

Leading figures in Mr Trump’s Republican party have reacted angrily to his latest comments, with House Speaker Paul Ryan saying: “White supremacy is repulsive.. There can be no moral ambiguity.”

“The ‘leader of the free world’ loses moral authority when he cannot call fascism by its name,” Mr Gyimah wrote.

Mr Javid said he had learned as a child that neo-Nazis were “bad” and anti-Nazis “good” and it was “pretty obvious”.

And Scottish Conservatives leader Ruth Davidson tweeted: “The president of the United States has just turned his face to the world to defend Nazis, fascists and racists. For shame.”

Labour leader Jeremy Corbyn echoed Mrs May’s insistence there is no equivalence between fascists and their opponents as he criticised Mr Trump.

Speaking on a visit to Cumbria, he said: “I can find nothing decent about anything the KKK or Nazis say or have ever said.

“Surely for goodness sake have we not learnt the lessons of what happened in the earlier part of the 20th Century, surely we have learned the lessons of the brave people that marched from Selma to Montgomery, there can be no return to those days.

A number of Labour MPs have called on Mrs May’s offer of a visit with state honours for Mr Trump to be withdrawn.

Shadow defence secretary Nia Griffith tweeted: “A state visit by #DonaldTrump would shame this country and betray all we stand for. Theresa May should revoke the invitation immediately.”

Senior Conservative MP Crispin Blunt, the former chairman of the Foreign Affairs Committee, said the visit should be postponed until 2020 – after the next US presidential election – and should have as its centrepiece the 400th anniversary of the Pilgrim fathers arriving in America.

He told BBC Radio 4’s The World at One: “I think that’s the right way forward out of what is undoubtedly going to be a very difficult situation and very probably a very big public order problem as well.

“It then becomes much more about the 400th anniversary of the Pilgrim fathers, rather than Donald Trump.

“And I think it then respects the relationship between our two nations and you take the element of Donald Trump as far as you can out of the visit.”

Lib Dem leader Sir Vince Cable said it would be “completely wrong” for Mr Trump’s state visit to the UK to go ahead.

“Donald Trump has shown he is unable to detach himself from the extreme right and racial supremacists,” he added.