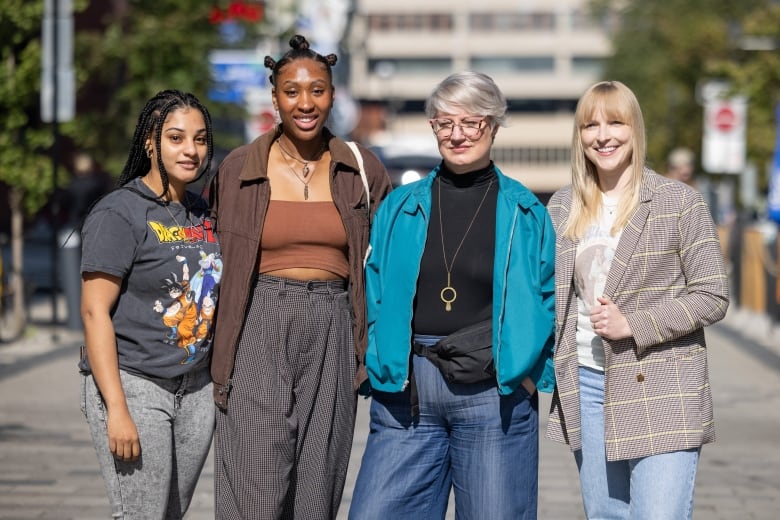 If less than two per cent of Canada’s music producers identify as women, then Reeny Smith, Erin Costelo, Breagh Isabel and Zamani make up a who’s who in Nova Scotia’s music industry.

The four female producers are gathered at the Carleton Music Bar and Grill in Halifax, and as they sit in a circle on blue velvet chairs under ambient lighting, you can sense the camaraderie between them.

Building each other up is part of how they plan to change the landscape of the traditionally male-dominated field of music production.

“When I was younger and then not seeing a whole lot of women do it, I don’t even think it occurred to me that that was a possibility,” says Costelo, who became the first woman to win Music Nova Scotia’s producer of the year in 2017.

She’s also the only woman nominated for producer of the year at this year’s Music Nova Scotia Awards, with the winners to be announced on Nov. 7.

A study released in March by the USC Annenberg School for Communication and Journalism in the U.S. showed women held only two per cent of all producing positions across the 2020 Billboard Hot 100 songs.

It found the ratio of men to women in producing was 180 to 1, and that women earned only 33 producing credits in six years, with only nine of those going to women of colour.

All of the nominees for the 2021 East Coast Music Award’s Producer of the Year were men.

But in an industry that has been slow to achieve gender equality, Smith, Costelo, Isabel and Zamani are breaking the mould.

Isabel says historically, non-male producers have not had role models to look up to — but that is slowly changing.

“It’s so hard to picture yourself doing something if you don’t see yourself and your experiences reflected back to you,” says Isabel as the other three women nod in agreement.

Isabel, 30, is a producer and artist who recently released a coming-of-age single titled Girlfriends, which exposes the painful side of young queer love.

She says a lack of representation in music studios — including people from diverse communities and members of the LGBTQ community — means audiences are missing out on different perspectives.

“If certain voices have historically been left out of the conversation, that just really narrows the scope of experiences that you hear talked about in songs on the radio or in songs on someone’s record,” says Isabel, her wispy blond hair brushing against her vintage-looking brown blazer.

“I think it only serves to broaden the conversation in the spectrum of what’s possible musically if there’s more diverse folks getting involved.”

Reeny Smith, 26, who grew up in the primarily Black community of North Preston, says she had to overcome her own mental barriers when she first started producing music.

“We have these assumptions based on past history and sometimes that can follow you into today’s present era — you don’t consider something an option because you don’t see people like you doing it,” says Smith, whose accolades include the East Coast Music Award’s R&B/Soul Recording of the Year for her album WWIII: Strength. Courage. Love.

“Sometimes you just have to just kick the door in, but it’s easier said than done.”

She takes pride in serving as a mentor to the younger generation.

“It’s all about believing what you can be, and a lot of the times you have to see it first,” says Smith, adding that those looking to get into the industry should just start, and don’t be afraid to reach out to others in the field to ask questions.

“It just gives us an opportunity to present different possibilities to people.”

Zamani, 20, grew up fiddling with knobs in her father’s home recording studio off their garage in Halifax, where today, several guitars can be seen leaning against an exposed brick wall near a keyboard, computer and mixing board.

She says her mother, a former vocal director and producer of an a cappella group, also served as a role model.

“Seeing that growing up has totally shaped my mindset around being able to be self-directed,” says Zamani, who produces all her own music and recently produced a piece for the Royal Nova Scotia International Tattoo.

“Being a female producer in a male-dominated industry is so important because it allows me to direct myself and be self-sufficient.”

Margaret McGuffin, the CEO of Music Publishers Canada, says although there is no data available about inclusion in Canadian studios, her sense is that the situation here could be even worse than the Anneberg study’s findings.

“When we look around our studios in Canada, we see a lack of representation of women and non-binary producers as well as a lack of a diverse slate of producers. We see it first-hand when we take our songwriters into the studios,” says McGuffin, speaking from Toronto.

Her organization has launched a program to help bring more women into music production and audio engineering.

The Women in the Studio National Accelerator is now in its third year and seeks to help launch the careers of women, gender fluid, non-binary and gender non-conforming participants through workshops, sessions and most importantly, a network of support and mentorship.

“We started this program because we felt there were so many songwriters who really couldn’t find their true voice when they were going into the studio,” says McGuffin.

“They felt they couldn’t speak up when they were in the studio, that their ideas were dismissed and they were not comfortable talking about their projects and as a result, that limited their ability to move forward, whether it was on the engineering side or the creative side.”

Back in her tiny home studio with a pink door, Costelo is nestled into a comfy ergonomic chair, tweaking an upcoming track from artist Don Brownrigg.

She says she’s optimistic about the future of the music industry.

“Part of what I hope is that regardless of whether any women like what I do, that they’ll see me doing it and be inspired to do it as well,” says Costelo, a few hand-painted portraits of her pets resting on a piano nearby.