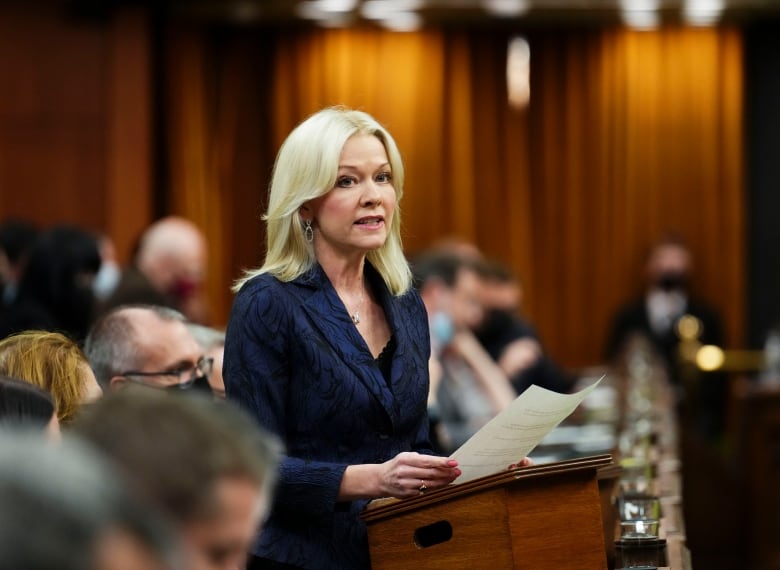 On Tuesday, as the inflation debate that consumed question period this spring ground on for another day, interim Conservative leader Candice Bergen and Finance Minister Chrystia Freeland got into an argument over which of them was “out of touch.”

Brandishing a new survey that suggests a quarter of Canadians have been eating less because of the cost of food, Bergen asked whether the Liberal government was ready to agree with the Conservative Party’s suggestions for easing some of the increased costs currently facing Canadians.

In response, Freeland pointed to the ways in which the spring budget enhanced support for Canadians: an expansion of the Canada Worker Benefit, an increase in Old Age Security and a one-time increase of $500 in the Canada Housing Benefit.

Bergen dismissed such measures as “a few piddly cheques” that “might dribble in through the mail.”

Bergen had overplayed her hand. Freeland made sure everyone noticed.

“Mr. Speaker, what is out of touch is for someone who lives in government accommodation to suggest that a cheque for $2,300 for a family of three working at minimum wage is ‘piddly’,” Freeland said, referring to the workers’ benefit.

That was a rare opportunity for the Liberals to play offence in a spring sitting during which they have faced — and have largely resisted — incessant calls to do something in direct response to inflation and the increased cost of living.

With just two weeks left before the House of Commons is set to adjourn for the summer, it is exceedingly unlikely the Liberals will respond to those calls before the fall.

But if inflation is still running hot when the House of Commons returns, the Liberals might be compelled to do something more. That could look like another cheque, “piddly” or otherwise.

Politicizing the price at the pumps

The Liberals have argued — not unreasonably — that recent inflation is a global phenomenon, driven largely by the pandemic and Russia’s attack on Ukraine. In response to concerns about the cost of living, they have pointed to long-term actions like expanded access to cheaper child care and new plans for subsidized daycare.

Of course, the Bank of Canada is also taking steps to tamp down inflation, largely through higher interest rates.

But knowing that COVID-19 and Vladimir Putin are to blame might not make it much easier for voters to accept higher gas prices — and it is on that very tangible issue that the Conservatives have focused their efforts.

A motion the Conservatives put before the House on Tuesday called on the government to suspend the application of the GST on gas and diesel sales and to suspend the carbon tax. A few provinces — including Alberta and Ontario — have moved already to cut their gas taxes.

The political purpose of those tax cuts is obvious. Their practical utility is debatable. Higher-income households tend to consume more fuel, so a cut in the taxes on gas is likely to disproportionately benefit people who are already in a better position to deal with rising costs.

Calls to suspend or cancel the carbon tax tend to sidestep the fact that almost all of the revenue from the levy is returned to households. Middle and lower-income households tend to receive more in carbon tax rebates than they pay out in direct costs. (A report by the Parliamentary Budget Officer in March that included larger economic costs offered a slightly different picture, though that analysis has been challenged).

And curtailing action to reduce greenhouse gas emissions in order to address inflation would only trade one problem for another.

Surprising no one, the Conservative motion was defeated on Tuesday night, with Liberals, New Democrats and Bloc Québécois MPs voting against.

The case for sending cheques — at least to some

Touting the same survey that Bergen cited on Tuesday, NDP Leader Jagmeet Singh reminded Freeland that New Democrats have suggested imposing an “excess profits tax” on oil and gas companies and using that money to double the GST rebate and increase the Canada Child Benefit by $500.

Here is where the Liberals could find something they can work with — if they decide that more needs to be done.

“If I were thinking about relief … I would focus on families who are struggling to make ends meet, which would not be a price solution, it would be an income solution, which would be, potentially, some targeted income transfers … to help people who are struggling to literally put food on the table,” said Kevin Milligan, an economist at the University of British Columbia. (Milligan was seconded to the federal Privy Council Office from June 2020 to April 2021.)

Liberals will note that both the Canada Child Benefit (CCB) and the GST rebate are indexed to inflation already.

But unlike a broad tax cut, doubling the GST rebate would be “much more targeted and provide a much stronger impact for people that are hit hardest because they spend more of their income buying things and therefore the impact of inflation is larger on them,” said David Macdonald, an economist at the Canadian Centre for Policy Alternatives.

Milligan said that a large and widespread boost in income support could be counterproductive if it served to fuel inflation, but the GST rebate and the CCB are targeted narrowly enough to avoid that kind of larger economic effect.

In a series of tweets on Tuesday evening, hours before the Conservative motion was formally defeated, Freeland listed various ways that existing federal policy can help “mitigate” the impact of inflation.

There might be an argument for waiting to see whether further action on inflation is strictly necessary. Governments are not obliged to jump every time an opposition party demands it. Doing something just to be able to say you did something is not always the wisest course.

But waiting to act also carries risk. Because if the Liberals do boost the CCB or the GST rebate this fall, the first question from opposition parties — and perhaps some voters — will be why they didn’t do it sooner.