The latest target of the student debt crisis — mom and dad 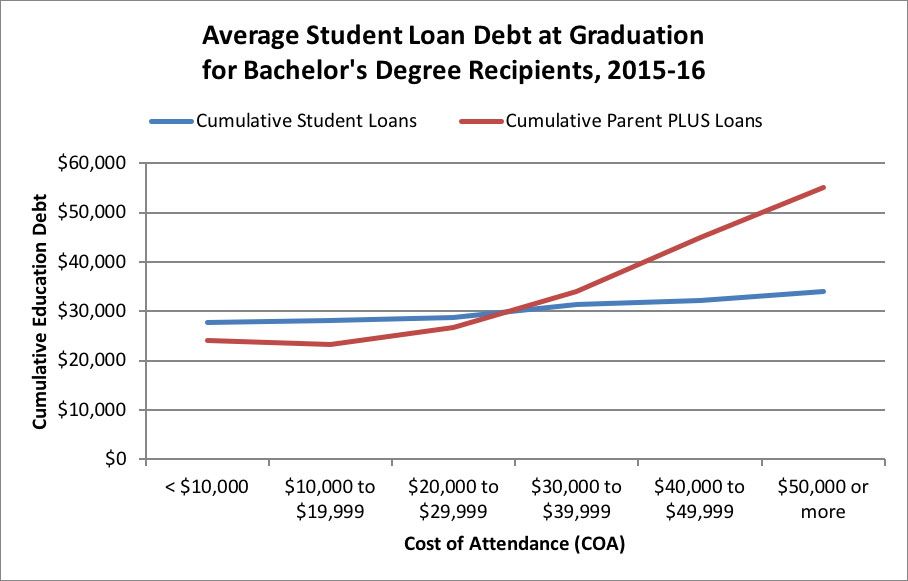 There’s no doubt that college is expensive.

Tuition and fees for a four-year private college averaged $35,830 in 2018-19; at four-year in-state public colleges, it was $10,230, according to the College Board. And that doesn’t count room and board or other expenses.

Few families have the cash to cover it, and that’s where borrowed money often comes in. On average, loans cover 24% of the tab when savings, financial aid and scholarships fall short, according to Sallie Mae’s 11th annual “How America Pays for College” report.

As a result, student debt has reached record proportions, with $1.6 trillion in loans outstanding.

And that burden is not just shared by students. Increasingly, parents are borrowing to make up the difference.

While the annual limit on federal student loans is $5,500 to $7,500 depending on your year in school, parents can take out up to the maximum of the cost of attendance (minus federal student aid or loans offered directly to the student) with so-called parent PLUS loans to offset any remaining amount that is not covered.

Today, at least 3.4 million people hold parent PLUS loans, owing nearly $90 billion, according to a November report by the Brookings Institution, a public policy research group. That doesn’t include parents who have consolidated their debt, in which a loan is rolled into a new one. It also doesn’t include borrowing through home equity loans, credit cards or other sources of credit.

Now, the average amount that parents borrow each year has far exceeded what students borrow — by more than double.

Currently, the average parent PLUS balance is $25,600, Brookings said. But some parents take out loans for multiple children, the researchers found, increasing their debt even more. Nearly 9% of parents who began repayment in 2014 owed more than $100,000.

Limits on parent PLUS loans were eliminated by Congress in 1993, the researchers said. And in 2014, eligibility for the loans was expanded to parent borrowers with weaker credit histories. Since then, at least 370,000 parents — who would have previously been denied the loans because of adverse credit — have been approved, according to the researchers.

As a result, default rates among parent borrowers are also increasing.

Before parents get in over their heads, Kelly Peeler, founder, and CEO of MoneyMentor, part of CommonBond, offers these tips for borrowers with college-age children who are facing their own student debt crisis:

Schools are often receptive to appeals for more aid; they just don’t advertise it.

“It’s not a guarantee, but even after committing to a college, there is still a possibility of getting more aid from a college,” Peeler said. The financial aid office might have “leftover” funds because of lower than expected enrollment numbers or other factors, she said. (Want more college aid? Here’s how to get it.)

Roughly a third of appeals are honored at most schools, according to Robert Franek, The Princeton Review’s editor-in-chief and author of “The Best Value Colleges.”

First, max out federal loans before considering parent PLUS or private loans, which come with their own — often higher — interest rates. Then, research whether you are better fit for a parent PLUS loan, which has a flat rate for everyone at 7% for the 2019-2020 academic year, or if you could be eligible for a lower rate with a private lender, which can be as low as 4%.

Most student loans, federal and private, have a grace period between when a student graduates and when they must begin making payments. To get a jump-start on that debt, and potentially save thousands of dollars, experts recommend making payments as soon as possible.

If you start the payments before the grace period, there is no minimum payment and no penalty for prepayment.

You can make progress with a small monthly payment — even as low as $25 a month, Peeler said. One of the biggest benefits to repaying loans early is reducing how much interest you’re paying overall, lessening your loan burden in the long run.