Users often commented on shared stories as if they were new. (Adam Killick/CBC)

Legitimate news stories are playing a role in the spread of disinformation online. The problem isn’t the source, but the date: the stories were published years ago and are being shared as if they’re new.

An analysis of traffic to the CBC News site shows that old stories are frequently recirculated online, and often shared without noting the age.

Many resurrected stories are benign — like this one about a knife-stealing crow that recently saw a spike of traffic — but some cover divisive or political topics. Without the context of when the story was published, online posts that share these stories can be misleading — and may stoke discord ahead of Canada’s federal election in October.

“This is different from fake news, but still misleading,” said Jonathan Anzalone, the assistant director for the Center for New Literacy at Stony Brook University in New York. “Taking something that’s true and taking it out of context can change its meaning, and can cause people to be misinformed.”

Take this story about an RCMP study that identified hundreds of cases of police corruption. It was published in 2014, but toward the end of May this year, the story began circulating on social media. It was shared on multiple popular Facebook groups, generating thousands of interactions, according to the social media monitoring site CrowdTangle.

Despite being published in 2014, this story posted on CBC News has been shared on social media over the last few weeks. (Screengrab/CBC News)

None of the posts indicated the story was more than five years old, and many comments below the post drew an association between the police corruption findings and Prime Minister Justin Trudeau. That’s despite the fact that the investigation took place during Stephen Harper’s administration and covered cases from 1995 through 2005.

“That’s a surprise … now follow it right to Trudeau and his band of thieves,” one commenter wrote below a post sharing the story on May 20.

One of the earliest posts sharing the RCMP study this year was on the Facebook page for the Canadian Combat Coalition, a group that has drawn criticism for its ties to the far right and white supremacists.

Dan Dubois, the president of the coalition and administrator of the Facebook page, said he shared the story after seeing it circulating in private message groups. He said he didn’t think it was misleading to share an old story because it’s “still relevant.”

“It’s an old article, but it’s an ongoing problem,” Dubois said. “When I share an article, I hope that people read it. It’s not my job to explain the article.” 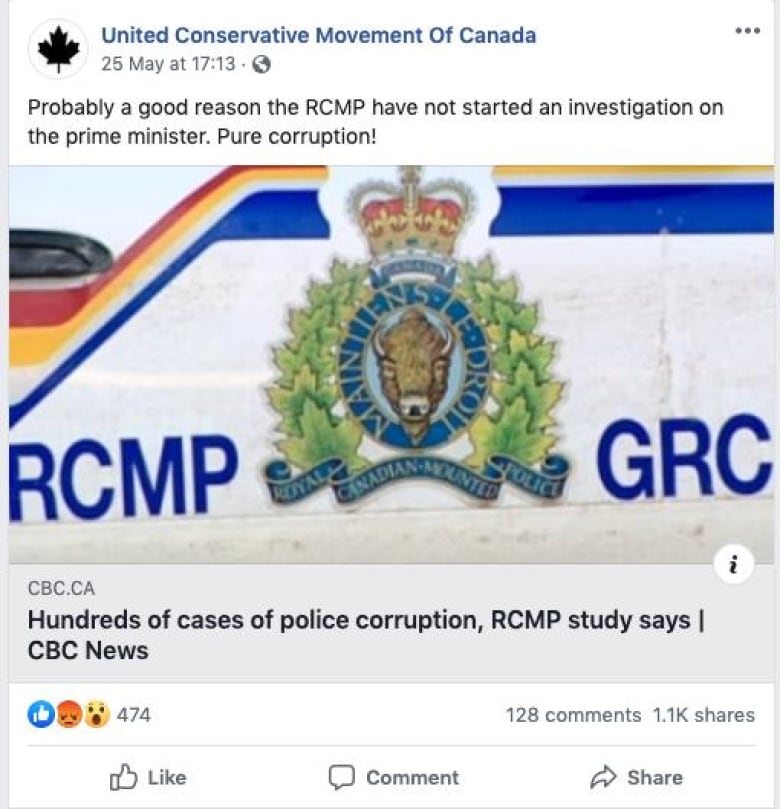 The United Conservative Movement of Canada Facebook group posted the story without noting that it was more than five years old. (Screengrab/Facebook)

But based on the comments, it’s clear many users either didn’t read the story or didn’t check the date it was published.

In just the past two weeks, at least seven CBC News stories on divisive or highly politicized subjects were recirculated online as if they were new. Sometimes, the publishing date was pointed out by a commenter, but often those comments were ignored.

We also identified examples from other news sources, like this 2016 story from iPolitics covering a comment Andrew Scheer made questioning the role of CBC’s news division. The comment was made before Scheer was the leader of the Conservative party, but was shared by multiple Facebook groups in February this year and again in May.

Without noting the date, it appears as though this was a comment Scheer made recently, and may even be interpreted as a formal platform proposal in an election year.

It’s difficult to determine when old stories are resurfaced in an attempt to mislead readers, and when they’re circulated due to an honest mistake. But Anzalone said there are some examples that are more obvious.

In April, when a fire broke out at Notre Dame cathedral in Paris, several Facebook pages recirculated an unrelated 2016 story about gas tanks and a note with Arabic writing that were discovered in a car near the cathedral.

“I think that was shared with the express purpose to demonize Muslims,” Anzalone said. “In some cases, the first sharer may know what they’re doing.”

When it comes to solutions, Anzalone said he’s in favour of news organizations doing more to make things like publish dates clearer. This year, The Guardian website began prominently flagging any article more than 12 months old, and those flags appear when shared on social media.

But Anzalone said it’s also important for readers to do their homework and vet the information they read and share online.

“I don’t think we, as news consumers, should put all the onus on the outlets,” he said.

Have you spotted something fishy online? Send your disinformation news tips to kaleigh.rogers@cbc.ca