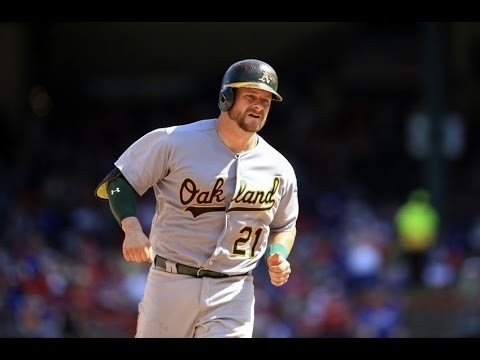 In a shocking but not unwarranted move, the A’s have DFA’d team rock, leader, and voice Stephen Vogt.

Vogt’s rough-and-ready play coupled with his extremely late breakout season made him possibly the least likely back-to-back All Star in the majors, and the most A’s-y A we’ve seen in a long time.

Over his four years with a team, Vogt tallied more magical moments than can be watched in one sitting.

Vogt’s first hit in the majors went deep, of course.

I brought a then elementary-school-aged family friend to Game 2 of the series, and I truly think this was the moment that locked him in as a lifetime fan. After Sonny Gray threw eight scoreless innings, the second half of his battery took matters into his own hands:

Easily one of the top five moments in recent A’s history.

Vogt had to begin the 2014 season in AAA thanks to Daric Barton’s presence on the Big League roster. We know how the Barton story goes, so fast forward to Vogt’s second game in the Majors in 2014:

A game-tying double off an All-Star setup man? Welcome to the show, Stephen.

The “I Believe in Stephen Vogt” chant began in June of 2014, and impressively stuck with him for the next three years. Vogt incited passion in teammates and fans alike. Even Buster Posey is a believer, once calling him the “epitome of a baseball player.”

2014 really was the year that really solidified Vogt as a fan favorite. He debuted his NBA referee impression on MLB Network, revealing the lightness he brought to the clubhouse.

Among many things he did for A’s fans and the Oakland community, this one really stands out. After the team received a letter that ended with “P.S. I believe in Stephen Vogt,” Vogt went to meet the young boy who wrote it, and played catch with him.

David Forst reportedly told Vogt before yesterday’s game that it was going to be his last, out of respect. Though Phegley manned the plate, Melvin got Vogt his final innings as an Athletic in left field.

To sum up, it fully captures Vogt’s essence that he texted Bob Melvin this morning to offer some final advice for his immediate replacement, Bruce Maxwell.

He can probably contribute to a team in contention, but expect to see him in an advisory or managerial role once his playing career ends.

We thank Vogt for all he’s done for Oakland A’s baseball, and we’ll always believe.