The earthquake unleashed by Trump’s departure from Iran nuclear deal 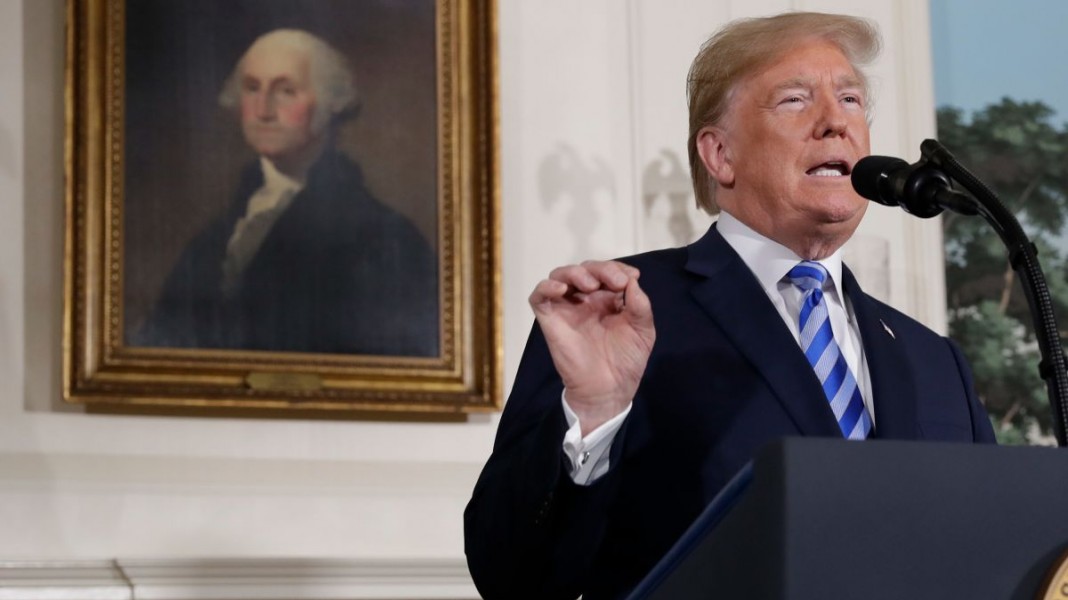 They came, they saw and they failed to convince. In short order, Emmanuel Macron, Angela Merkel and Boris Johnson beat a path to Washington but left empty-handed.

The last time Europe and the US were this far apart was on the eve of the Iraqi invasion in 2003; even then the Brits went along with Operation Enduring Freedom.
This time, the consequences seem more dangerous and far-reaching. We don’t yet know whether Iran will remain in the Joint Comprehensive Plan of Action, or JCPOA, but President Trump’s promise that the US would impose “the highest level of economic sanctions” suggests the administration is intent on punitive action rather than a graduated approach that leaves the door open for compromise.
And Iranian President Hassan Rouhani said shortly after Trump’s announcement that he had ordered the country’s “atomic industry organization to be fully prepared for subsequent measures if needed so that in case of need we will start our industrial enrichment without limitations.”
Under the terms of the JCPOA, renewed US sanctions would start to bite over several months as the US Treasury develops guidance for companies and banks. But there’s no roadmap for opting out; expect a tide of FAQs on what will be a complex process.

Among Washington’s European allies, wariness of the Trump administration has evolved into exasperation bordering on mistrust. It’s not just about Iran: there’s climate change, steel and aluminum tariffs and the sheer unpredictability of US policy.
France’s President Macron invested heavily in his relationship with Donald Trump; he’s been snubbed. British Prime Minister Theresa May is desperate to keep the US President away from London when he visits this summer to defuse mass protests. German Chancellor Merkel’s attitude has often verged on disbelief.
Trump’s reimposition of sanctions amounts to a major rebuke to US allies.
Earlier this week, UK Foreign Secretary Boris Johnson wrote of the JCPOA: “Now that these handcuffs are in place, I see no possible advantage in casting them aside.”
The US has now discarded its allies’ advice and the EU has neither the incentive nor more significantly the capability to wring concessions out of Iran: on its ballistic missiles, its regional expansionism or on a longer-term deal to reinforce JCPOA. As one European diplomat told CNN: “We have no leverage any more.”
The Europeans may however try to protect growing commercial interests in Iran from what they regard as the unfair impact of US sanctions on European business. Italy and France have supported trade and investment in Iran this year through credit guarantees. But the US sanctions passed by Congress in 2012 — and likely to be the first reintroduced — demand other countries reduce Iranian oil imports or risk penalties.
The worst-case scenario would see the EU reintroduce what’s called the blocking mechanism first devised in 1996 when Congress imposed sanctions on all firms, including non-US firms, if they were doing business with Libya or Iran. The blocking mechanism made it illegal for any European firm to abide by those sanctions.
But there is no ironclad protection against the reach of the US in the international financial system. Even the threat of renewed US sanctions has deterred some European businesses from investing in Iran.

Trump’s decision will be greeted with glee in the Kremlin. Any time Europe and the US are “decoupled” it’s a win for Russian foreign policy. Moscow will likely paint the US as an unreliable actor, while its more assertive policy in the Middle East — from Turkey via Syria to Libya — may also benefit from American abstention.
China wants the JCPOA to survive, but may also see a silver lining in the US decision. It already invests heavily in the Iranian energy and construction industries. The China National Petroleum Corporation has a 30% stake in the development of the huge South Pars oil and gas field in Iran. If European competitors like Total and Siemens are scared off by the specter of US sanctions, so much the better for Chinese companies.
Beijing also sees Iran as a vital notch in its Belt and Road project to spread Chinese influence and commerce westwards. State-owned investment arm CITIC Group has a $10 billion credit line and China Development Bank is considering another of $15 billion.

Rouhani sold JCPOA to the Iranian people on the pledge that their country would be open to the world again, that investment and trade would flow. He also sold it to the skeptical Supreme Leader, Ayatollah Ali Khamenei, and overcame the hostility of the Revolutionary Guard Corps.
To many Iranians, the results have been disappointing. The Iranian riyal has plummeted and unemployment is in double digits.
Now the balance inside Iran has changed. Hardliners are declaring that the US was never to be trusted. The leader of Friday prayers in Tehran, Hojatoleslam Kazem Sedighi, said on Tuesday that Khameini’s prediction “about JCPOA was correct” — that it “would eventually be destroyed.”
Ali Akbar Velayati, a senior adviser to Khamenei has said that “if the United States withdraws from the nuclear deal, then we will not stay in it.”
That’s at odds with Rouhani’s pledge on Monday that “If we can get what we want from a deal without America, then Iran will continue to remain committed to the deal.”
A battle royal is shaping up in Tehran’s corridors of power. Some Iranian officials have even suggested that Iran could withdraw altogether from the Nuclear Non-Proliferation Treaty, ending inspections by the International Atomic Energy Agency. Once again, the world would be left to guess Iranian intentions even as it accelerates its ballistic-missile program.
Iran stopped producing 20% enriched uranium as part of the 2015 agreement, but the head of Iran’s Atomic Energy Organization, Ali Akbar Salehi, claims Iran can now enrich uranium to a higher level than it could before the deal. Experts believe that, should it choose to resume the enrichment of uranium, Iran could build a bomb within about a year.
Defeat for Iran’s moderates would carry dangers even if the broader Middle East was at peace. But in Syria, Yemen, Iraq and Lebanon, the hardliners of the Iranian Revolutionary Guard Corps will feel emboldened, not deterred. Theirs’ is an ideological war.
The collapse of the deal could make Syria a proxy battlefield between Israel and the Iranian militia embedded there. The signs are already present. On Monday, Israeli Energy Minister Yuval Steinitz warned: “If Assad allows Iran to turn Syria into a forward operating base against us, to attack us from Syrian soil, he should know that will spell his end.” And on Tuesday, the Israeli military ordered the opening of civilian shelters after detecting what it called “irregular activity” among Iranian forces in Syria.
Iran could also leverage its support of Shia militia in Iraq to undermine any efforts by the next government (elections are on May 12) to sustain relations with the US. Iranian and Iraqi militia already in Syria could expand attacks against the Syrian Democratic Forces and the US troops who support them.
These are all worst-case scenarios, but they are far from inconceivable.
Share
Facebook
Twitter
WhatsApp
Pinterest
Linkedin
ReddIt
Email
Print
Tumblr
Telegram
Mix
VK
Digg
LINE
Viber
Naver
Previous articleHawaii’s volcanic eruption has destroyed at least 26 homes, officials say
Next articleStormy Daniels’ lawyer: US company linked to Russian oligarch paid $500,000 to Cohen