The Complete Guide To Wearing Checks 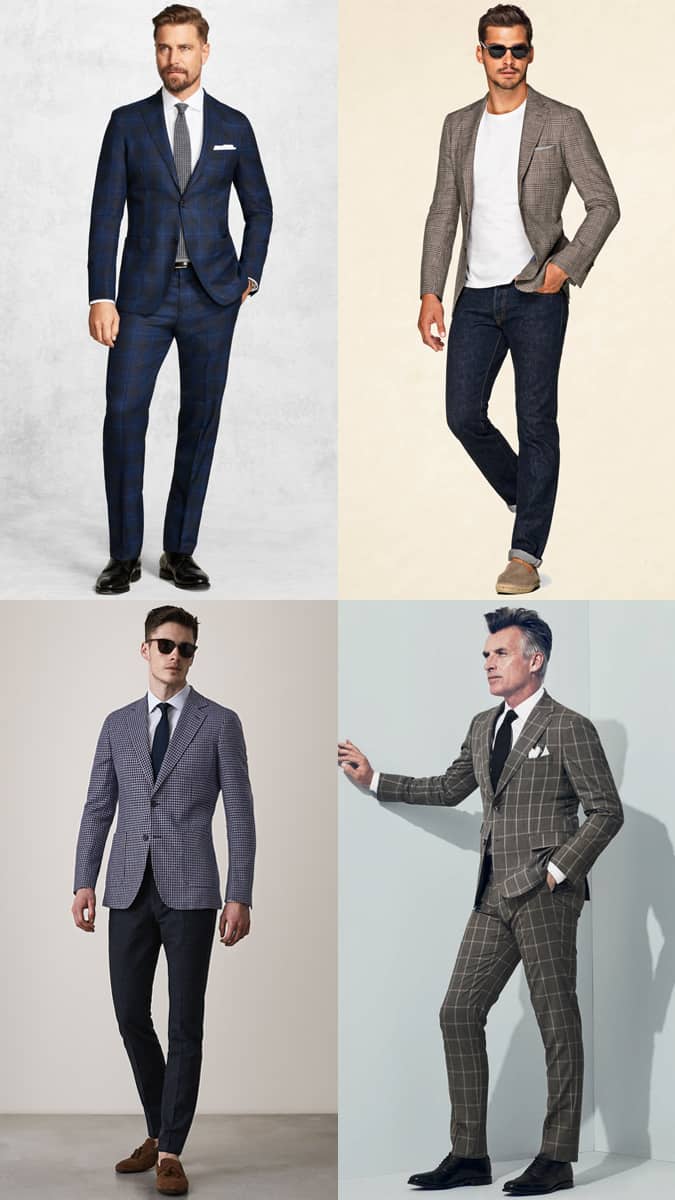 Wearing Checks Who would have thought that a bunch of intersecting lines of various widths, colors, and spacings, first devised to delineate different highland clans from one another, would become one of the most plundered fashion tropes of all time? Perhaps it’s the geometric simplicity of checks, plus the almost infinite color combinations, that have made this pattern a permanent name on fashion’s team sheet.

You could have thrown a dart at any of the London, Milan, or Paris fashion week schedules earlier this year and hit a brand using checks in its collection. But before you go out and blaze the shops like William Wallace on a supermarket sweep, know this: wearing checks has the potential to be Roadrunner to your Wily Coyote. Lives have been ruined by an abhorrent check blazer, and as for the guy who always shows up at summer parties in garish check trousers…

On the other hand, if you understand the rules of engagement, checks have a good habit of making you look refined by default and it’s a partnership you’ll covet for the rest of your life.

Despite the huge variation of checks available, there’s no need to overcomplicate matters. These are the five key styles to check off your list, each very different from the other in both looks and deployment.

A neat, tight check pattern that becomes almost mottled to the eye at distance, gingham is typically a medium-weight plain-woven cotton yarn, although in the summer you’ll see plenty of linen blends. Thought to have originated in northern France, gingham was made almost exclusively by Manchester mills in the 18th century. Popularised by mods in the sixties, it’s nevertheless suitable for work and play. Its colors are often bright, which makes it a good option for layering.

“The easiest way to incorporate gingham into your wardrobe is with a shirt – either a casual Oxford button-down or a formal shirt,” says Sarah Gilfillan, founder of personal styling consultancy for men, Sartoria Lab. “If you want to be a bit bolder, a small gingham check looks great in a bomber jacket.”

As the name would suggest, the Prince of Wales check (also known as Glen plaid or Glenurquhart check) has a royal heritage. Defined by large squares that typically combine black- or brown-and-white check with a vein of contrasting blue, pink, red, or green overcheck, it’s commonly believed that it derives its name from the slick-dressing Duke of Windsor when he was known as the Prince of Wales. It was his grandfather Edward VII who had a penchant for the fabric.

It’s one of the most versatile and easy-to-wear patterns in the checking squad, lending itself beautifully to laid-back suiting but also outerwear in the form of tailored winter coats. The magic of PoW lies in that contrast overcheck, which allows you to harmonize the color with other parts of your look.

If PoW check is the good-looking, hardworking older sibling, then windowpane check is the younger brother who loves getting all the attention. Make no mistake, with its contrast white squares it’s a loud, bold, statement of a pattern, a feature that makes it notoriously difficult to wear as separates. Hence if you’re going to wear a windowpane, stick to the suit in a soft flannel cloth.

There are over 400 tartan styles, and they started as a means for Scottish clans to set one another apart (before they tore each other apart). Later, Scottish estate owners would develop their own to camouflage themselves during the shooting season, picking colors from the landscape around them.

These days, tartan still plays a part in contemporary collections thanks in part to Burberry’s iconic motif and tartan’s adoption by the punk movement in the seventies. It’s also a signature of Vivienne Westwood and pops up everywhere from Barbour to Palm Angels. And therein lies the secret to wearing it – in pops of accessories or used in patchwork fabrics. Not full look tartan army like the Bay City Rollers.

Buffalo checks have been trending hard in recent years, the pattern-finding a natural home on workwear- and outdoors-inspired pieces like flannel shirts and chore jackets. Yet where it comes from is hotly disputed.

On the one hand, Woolrich claims to be the originator of the bi-color, square block check; while on the other, a man called Big Jock McCluskey is said to have brought the cloth from Scotland to the US. He supposedly used it to barter for buffalo pelts with Sioux and Cheyenne tribes, hence the name. Apocryphal or not, it’s a great tale and an even better fabric for casual shirting.

Every man should have at least one check suit in his formalwear line-up, whether it’s for a job interview or you just need to impress upon someone a degree of self-assurance.

“A light check-in nude or neutral cloth is a great fair-weather option while a subtle navy glen plaid is a handsome year-round alternative to plain navy,” says Ryan Thompson, digital editor at The Rake. “A navy windowpane check is also a great way to display confidence and refinement without looking too much like a peacock.”

With separates, check trousers on their own is a riskier look than a check blazer, which can be dressed up or down depending on the occasion. “I like the combination of browns and blues, which looks great with denim,” says Gilfillan. “If there are other colors in the blazer, pick one of those out for your trouser color.”

“Whatever your signature look, a check overcoat will complement it, making it the most important purchase you’ll make for autumn.”

Alternatively, a simple white shirt with a faint windowpane check offers a nice contrast to a pinstripe suit and you could also wear it with a striped tie to field a mash-up of contrasting lines. Pattern mixing is advanced styling but this is the simplest way to do it well.

Hats, rucksacks, totes, and holdalls can all be useful ways to pattern clash. Just avoid syncing the checks of your accessories with the checks of your clothes unless you’re receiving monetary compensation for doing so – it’s never a good look.

Also read: How To Wear Suspenders: Easy Tips For Every Occasion

7 foods that make the penis bigger and thicker naturally

17 Stylish Magazines That Should Be Weighing Down Your Coffee Table

17 Of The Best Hoop Earrings For Men: From Basic to Extravagant (2022 Edition)