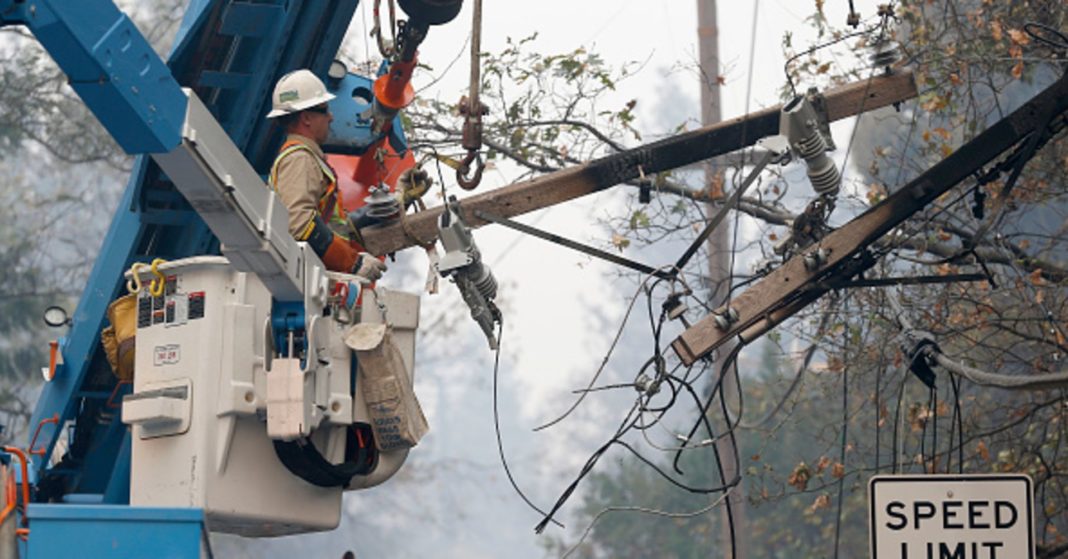 PG&E Corp. stock — a favorite among hedge fund elite as recently as September — added to an abysmal slide Tuesday after the company announced the resignation of a longtime board director as the utility grapples with impending bankruptcy stemming from its alleged part in helping spark a wave of historic wildfires in California.

Renowned hedge funds — including Baupost Group, D. E. Shaw and David Tepper’s Appaloosa Management — all had stakes in the San Francisco-based utility as recently as September, just before the deadliest wildfire in California history swept across the state, killing 86 people and destroying about 14,000 homes.

The company’s financial calamity took a new turn Monday when PG&E said it plans to file for Chapter 11 bankruptcy protection due to more than $30 billion in potential liability costs stemming from wildfires in 2017 and 2018.

Shares of California’s largest investor-owned utility swooned through the end of 2018, tracking the destruction of the so-called Camp Fire and the mounting damage to life and property. The stock is down more than 80 percent over the last three months, with the company’s market value dropping more than $30 billion to about $4.7 billion from a peak over $36 billion in 2017, a loss equivalent to the size of eBay.

Such a steep decline — while uncommon for any public company — is rare for a utility company, which are often favored by investors for their relative stability during times of economic turmoil.

The necessity of the services and products such utilities provide often grant cautious traders a reliable to hide cash when Wall Street trading become volatile. That may have been the thinking at some of the world’s largest hedge funds, many of which purchased a stake in the California company as of the end of the third quarter of 2018.

Hedge fund manager David Tepper added to his stake in Appaloosa in the third quarter, snapping up 2.2 million shares to round out a position of about 4 million. David Shaw’s quant fund D. E. Shaw owned 6.7 million by the end of September while Seth Klarman’s $30 billion Baupost held nearly 19 million.

It is possible the funds sold stock in PG&E after the end of the third quarter and prior to the start of the Camp Fire. The stock was worth about $46 by the end of September; it was last seen trading at $6.16.

If the above funds had made no adjustments to their equity holdings since the end of September, Appaloosa would be down at least $159 million, D.E. Shaw would be down $266 million and Baupost would be down $757 million.

D.E. Shaw and Baupost declined to comment for this story, while Appaloosa did not respond to CNBC’s request for comment. A source familiar with the matter confirmed to CNBC that Klarman has spoken to multiple insurance companies about buying their claims against PG&E, which was first reported by the Wall Street Journal.

Such claims would be entitled for repayment under a bankruptcy proceedings and could work as a hedge that could offset losses in PG&E’s equity. The claims could also grant the hedge fund a say in how the company ultimately reorganizes itself.

Baupost paid as much as 35 cents on the dollar to purchase $1 billion in claims associated with 2017 fires, people familiar with the situation told Bloomberg News. The hedge fund has long been a force in the opaque subrogation claims market, where insurers sell the right to file suit to collect damages suffered by policyholders. Insurers are hard-pressed to sell such claims because they take a discount on their face value in exchange for the certainty of being paid upfront.

Other leading hedge funds with a stake in PG&E — including BlueMountain Capital, Orbis Investment Management, Hound Partners (originally founded with a seed investment from Tiger Management), Viking Global, SouthPoint Capital, Citadel and Millennium Management — all declined to comment for this story.

The WSJ reported that Viking exited its position at a loss before the drop in the stock intensified this week on bankruptcy concerns. It’s possible others did as well. There’s just no way of knowing until the new filings come out next month.

The crisis at PG&E did not appear any better on Tuesday, when the company announced in a government filing that longtime director Roger Kimmel resigned from the board. The company provided official 15-day advance notice on Monday that it and its wholly owned subsidiary, Pacific Gas and Electric, intend to file petitions to reorganize under Chapter 11 of the U.S. Bankruptcy Code on or about Jan. 29.

The company has 16 million customers across a 70,000-square-mile service area in Northern and Central California.