The Best Dipping Sauces For French Fries That Aren’t Ketchup 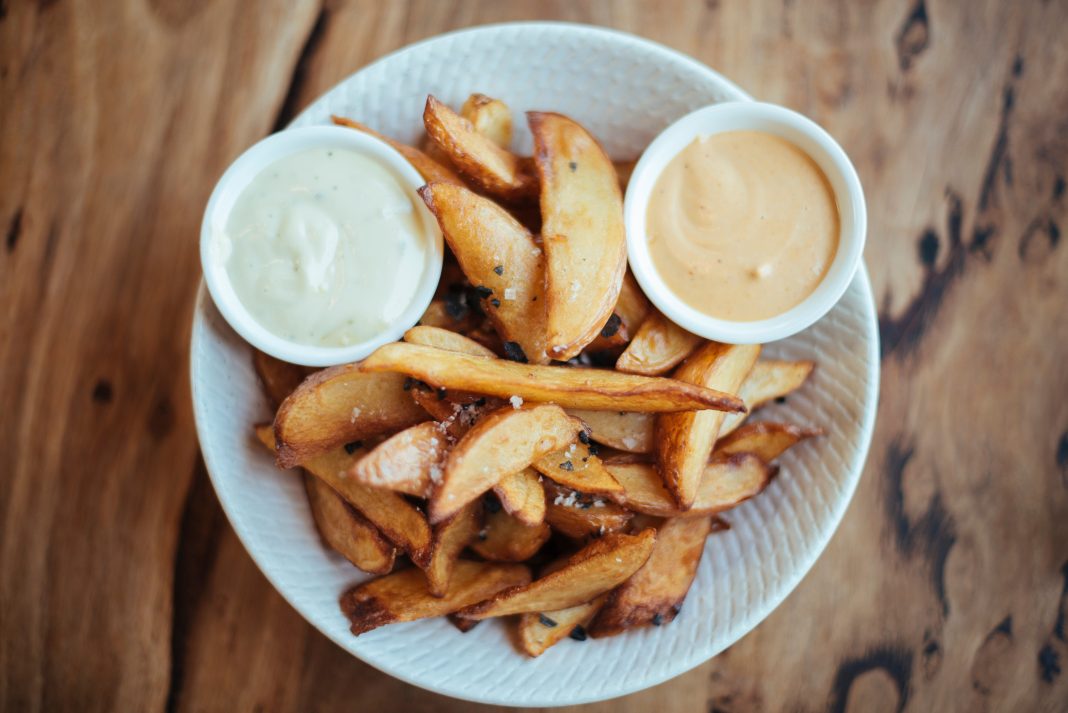 When it comes to enjoying a side of fries (or a full plate, let’s be real) at a restaurant or at home, ketchup tends to be the default dipping sauce for most. But while the sweet tomato condiment has its merits, you don’t have to limit yourself.

We asked culinary experts to share their favorite non-ketchup dipping sauces for french fries. Keep scrolling for some exciting options, as well as specific brand and recipe recommendations.

“I love using a black garlic aioli for dipping fries,” said Brian Landry, chef and owner of Jack Rose and Bayou Bar in New Orleans and Marsh House and L.A. Jackson in Nashville. “The garlicky taste and creaminess is the perfect balance to the saltiness and crispiness of the fries. Plus, it’s super easy to make.”

Although you can make your own garlic aioli, there are also plenty of solid store-bought options for lazy days. Lola Osinkolu, a home cook and blogger at Chef Lola’s Kitchen, enjoys Kraft Mayo Garlic Aioli.

“Garlic aioli dipping sauce is my preferred choice when I’m craving something savory,” she said. “It’s made from mayonnaise, garlic and lemon juice, so it’s very light and refreshing ― it goes very well with just about anything.”

“When we get into the Thousand Island neck of the woods, there are so many recipes out there for what in the South is called ‘Comeback Sauce,’” said cookbook author Brian Theis. “It’s usually some combination of mayo and ketchup with chili sauce, onion, Worcestershire, Creole mustard, an acid like lemon juice and maybe hot sauce and/or horseradish thrown in. It can have a heck of a lot of ingredients.”

Comeback sauce has roots in Mississippi cuisine and supposedly got its name from the southern practice of saying farewell, with some variation of “Y’all come back now!”

“Further to Thousand Island or Comeback Sauce for dipping your fries, a Louisiana rémoulade sauce (usually served with shrimp) is quite satisfying as well,” Theis added.

“I will never grow tired of french fries with mayonnaise,” said Meggan Hill, executive chef for the recipe site Culinary Hill. “I prefer mayonnaise to ketchup because it’s not sweet, and I simply love the combination of salty fries and fatty mayo.”

Hill’s preferred brands are Hellman’s and Duke’s, though she also recommends making your own mayo if you’re up for the challenge. Mayo sauces are also a favorite of Theis, who lived in the Netherlands as a child.

“In Holland it is called ‘fritessaus’ (fries sauce) and is sweeter and usually has less fat than an American mayo. Now if we’re talking about the best store-bought U.S. mayo to dip your fries in, that brand of course is New Orleans’ own Blue Plate! Blue Plate is also sweeter than Hellman’s.”

“I really like a spicy cheddar mornay for fries,” Landry said. “It’s a really elevated version of cheese fries. I use a shredded cayenne cheddar that you can buy, or you can substitute for pepper jack cheese. It’s a bit more involved to make since you have to make a quick roux first, but it’s worth it!”

Mornay is a classic French sauce made with béchamel and cheese that incidentally also makes for a great macaroni and cheese.

Once you’ve cooked your roux for five minutes, whisk in a quart of milk, adding half a cup at a time and allowing it to thicken between pours. After adding all the milk, gradually add a quart of shredded cayenne cheddar or pepper jack cheese until fully incorporated. Then remove from heat and season with salt.

You can also enjoy a spicy cheese dipping sauce without having to cook it yourself.

“My favorite dipping sauce with my french fries is a creamy and smooth cheese sauce like Tostitos Salsa Con Queso,” said Carla Bushey of the food blog Adventures of a Nurse. “I love the cheesy flavor with a bit of spice which takes my fries from ordinary to extraordinary.”

“I recommend making your own aioli because it’s very simple to make and so versatile when it comes to flavor,” noted Sharee Hill, the food blogger behind Savory Spicerack. “One of my favorite flavors to include when making aioli is chipotle.”

Craig Carey, founder of Big Buns Damn Good Burgers in Northern Virginia and Florida, is also a fan of this zesty combination.

“Our fries are served with our house chipotle aioli,” he explained. “A cravable, perfect smokey flavor is the result of Duke’s Mayo, adobo chipotle peppers, fresh pesto, oil, salt and fat. When we opened, so many people were asking for it, we started including it with the fries standard.”

We might not have the budget or time to regularly prepare fresh restaurant-style truffle fries at home. But there are other ways to capture the flavor experience.

“I am all about jazzing up dipping sauces for french fries other than ketchup,” said Alex Hill, a home cook and creator of Just Add Hot Sauce. “I am a major fan of dipping fries in mayo, and Truff has a great truffle-infused mayo that goes amazing with french fries.”

“If you’re sweet-toothed, I recommend honey mustard dipping sauce because it’s light and flavorful with a hint of sweetness, but not too sweet like ketchup can sometimes be,” Osinkolu said. “The sweet and tangy flavor cuts through the saltiness of the fries, and you will also get the added kick from the mustard seeds.”

“It has a great balance between honey and mustard flavors, but it’s also pretty easy to make at home if you have all the ingredients,” she added.

“One of my favorite dipping sauces is a chimichurri style that my family loves,” said chef Marshall O’Brien. “It is made of olive oil, parsley, green onions, garlic, white vinegar, salt and pepper.”

In addition to using it as a tasty dip for fries, O’Brien also recommends adding this easy-to-make chimichurri sauce to eggs, fish, pizza and beef.

“Ketchup with fries is good, but I prefer dipping my fries in a creamy, mayo-based sauce that has some heat,” said Dzung Lewis, a YouTuber and author of “The Honeysuckle Cookbook.”

“It’s great on sandwiches too!” she added. “The creamy sauce balances out the spiciness and when enjoyed with fresh and hot fries, it’s out of this world!”

“Ranch dressing is another obvious, yet delicious, choice for french fries,” Meggan Hill said. “However, I dislike the strong artificial, cheesy taste of most store-bought shelf-stable varieties. The only brands worth their salt are typically refrigerated in the produce section that taste like they are made with fresh herbs.”

Yanna Slavutsky, corporate chef at Blue Dog Cookhouse and Bar in New York City, is a fan of homemade banana ketchup. Invented by Filipina food technologist and war heroine Maria Orosa, this condiment is made with banana, sugar, vinegar and spices.

“Banana ketchup creates a chemical reaction with the heat of the fry and really brings out the mild creamy flavor of the fry,” Slavutsky said. “The sweetness compliments the saltiness of the fry as you’ll be pleasantly surprised with the outcome of the flavor generated in your taste buds. This alternative is a unique twist and so much better than regular ketchup.”

As we’ve seen with truffle mayo and kimchi mayo, there are many ways to enhance a classic mayo with a punch of flavor.

“Chipotle mayo is great for a smokey tangy taste,” Alex Hill said. “They sell an over-the-counter version or if you want to make your own chipotle mayo just grab some Chipotle peppers in adobo sauce and add the sauce to a mayo of your choice ― mine is Duke’s Mayo.”

Over time, the typical french fries and ketchup combo became boring to recipe developer Marci Buttars of the food blog Tidbits. She did, however, eventually develop a love for sweet potato fries.

“The best ever dip for sweet potato fries is a mix of my favorite Date Lady Sweet Chili Sauce and some mayo or yogurt,” she told HuffPost. “If I want a bit more of a Thai spin, I’ll swirl in some peanut butter too. Amazing!”

“If you’re doing French, there’s no substitute for a toe-curling hot Dijon with your steak frites,” Theis said. “Ideal with the steak itself, the zesty mustard is also terrific with your ‘French’ fries.”

O’Brien likes to zhuzh up his Dijon dipping sauce for something a little more special, though equally simple.