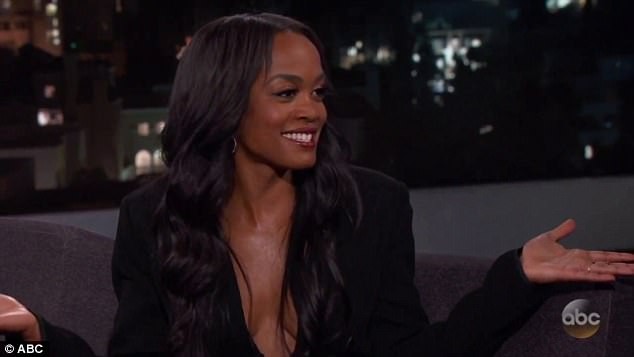 Sure, they got engaged after just a few weeks of knowing each other in front of the cameras of The Bachelorette, but now that they’re engaged and their engagement is out in the open, they’re not rushing anything else.

“Right now, Chris, we just want to bring our lives together,” Bryan told Chris Harrison. He and Rachel explained that while they hadn’t picked a city yet (between Los Angeles, Dallas, and Miami), they were working on bringing their lives together in one of those places before talking wedding plans.

However, they do have a season in mind.

“She wants to do a winter wedding, and whatever she wants, she gets,” Bryan said.

“But, you know, we’re not rushing anything,” Rachel added. “We just want to see—build our lives together and get to know each other in a normal sense.”

Bryan also revealed that he and Rachel had spoken to his mom together over the phone, and that despite her terrifying warnings about being the main woman in Bryan’s life, she welcomed Rachel into the family.

“She loves Rachel,” he said. “They’ve spoken a couple of times since the proposal and they get along great.”

Rachel’s family, on the other hand, is still not entirely sure of this whole thing.

“My family is skeptical,” she explained. “That’s where I get it from–Surprise!–and I think that, you know, they just needed to get to know Bryan and see who he is, and they have, and they trust me in what I’m doing even though they don’t understand this whole process, they understand me and they understand the decisions I make.

Rachel went on to say that during the hometown date, she shocked herself by referring to Bryan as her best friend, and that’s when she realized that he was “the one.”

And while that finale left us more than a little shook (which is a word we do not use lightly), it was hard not to be affected when Bryan came out and re-proposed to Rachel on live TV.

For a refresher of how every season in the franchise has ended, keep on scrolling!

The Bachelor will premiere in January, but in the meantime, Bachelor in Paradise premieres next Monday at 8 p.m. on ABC.