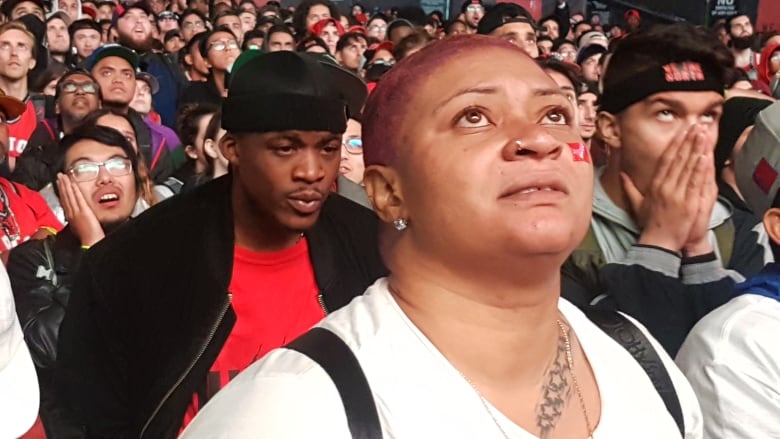 Dalmar Ali watched from Toronto’s Jurassic Park as the Raptors lost by just one point to the Golden State Warriors. ‘That one hurts. We had them right there,’ he said. (Andrew Lupton/CBC)

Jessy James paused for a second to think about how he felt after such a heartbreaking, one point, Toronto Raptors loss to the Golden State Warriors on Monday.

“I feel like my long lost girlfriend broke up with me. It feels hard,” said the 27-year-old Torontonian.

“But I have so much love around me I can’t feel too sad about it.”

Since Sunday night, James had been camped out at Jurassic Park — the downtown Toronto outdoor public square with the big screen television that has become a fan focal point to watch playoff games.

He was able to get to the front of the crowd inside the Park, where he and thousands of other jubilant fans had crammed into the square, hoping a Raptors victory would make them part of Canadian sports history.

Many Raptors fans in Toronto remained optimistic after the team failed to clinch the championship. The series heads back to Oakland, Calif., for Game 6 on Thursday. 0:54

City officials and police had prepared for such a celebration, which would have likely sent hundreds of thousands of frenzied fans into the downtown core.

Instead, minutes after the final buzzer went, many stunned fans quietly left the Park, shaking their heads in disbelief that they had come so close to a championship win, losing 106-105.

‘You can never be certain’

Alan Joumaa had a more philosophical outlook on the defeat.

“The lesson here is that you can never be certain in life.”

By halftime, the Warriors lead by six, yet there was optimism at Jurassic Park. 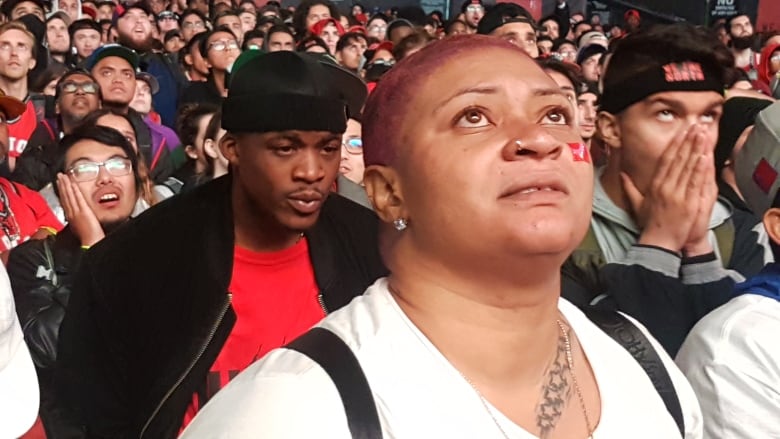 Despite a six point lead by the Warriors at half time, Nikki Lee remained optimistic. ‘The boys just need to relax,’ she said. (Mark Gollom/CBC)

Toronto Mayor John Tory dropped by and waded inside the massive crowd to meet with fans.

The final minute of the game saw the Warriors up by three. Then, with 30 seconds left, up by only one. With 15 seconds remaining, it was Raptors ball but Kyle Lowry missed a final last second shot, resulting in the one point loss.

“That one hurts. We had them right there,” said Dalmar Ali, a basketball coach, who also watched the game from Jurassic Park. “But hey, it’s all right.”

“That one’s gonna sting. Woulda felt good to take it at home. It’s tough, but I still believe the boys will get it in six.”

Foster Postill and Jeff Nyman drove about three hours from Goderich, Ont., to watch the game from the Park. Both believe Kawhi Leonard and not Lowry, should have taken that final shot.

“Kawhi is the guy that has to have the ball in his hands,” Nyman said.

“That is a dagger, that is a true big dagger to the heart,” Nyman said of the loss. “That hurt and hopefully we come back.”

Jamie Holst from Aurora, Ont., said he worked on the weekend just so he could have Monday off to be in Toronto at Jurassic Park to watch the game.

“I came here all alone, completely solo. I didn’t know anyone and none of my friends wanted to go,” said Holst, who had been on his feet since 6:45 a.m, when he arrived. “I just had to be here.”

Both Ali and James said they will return to Jurassic Park on Thursday for Game 6, when the Raptors, again, will try to win the championship, this time in Oakland, Calif., If the Warriors win at home, Game 7 will be played in Toronto.

“It didn’t go the way we wanted. I”ll be back here. Ain’t nothing changed,” Ali said.