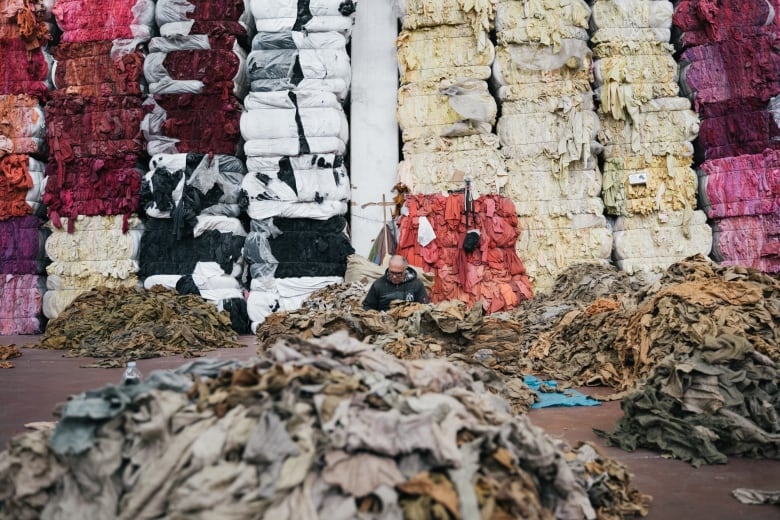 The fabric is recycled from discarded clothing from landfills and rag houses — warehouses full of second-hand clothing — in southeast Asia and Africa that eventually lands in Vancouver, where Long’s team uses it to create new garments.

Long estimates his business kept 136 tonnes of textile waste out of landfills abroad in 2020 — around the weight of a blue whale — and he’s hoping to make even larger strides in recycling in the future.

Textile waste, which comes from the manufacture of clothes and their eventual disposal into landfills, is one of the fastest growing waste streams in the world.

While there are signs that governments are taking the problem seriously by providing more sustainable disposal options, some people in the recycling and textiles industries say Canada still lacks a lot of the infrastructure to properly re-purpose clothes — and that there is still too much reliance on other countries to break down our garments for us.

Long says the model of his business is “a step forward into understanding and reducing our textile waste,” but much more can be done.

“One day I would love to be able to, you know, set up a rag house here in British Columbia in the Lower Mainland, be able to cut off that whole sort of circular global supply chain and go straight from our own consumption to our own uses,” he said.

Textile waste is growing in large part due to increased sales of cheaper clothes and the trend of “fast fashion” that’s leading to more garments being thrown out. On average, people are buying three times more clothes than they did in the 1980s, according to the City of Vancouver.

Metro Vancouver residents throw out around 20,000 tonnes of textiles each year, which is equivalent to the weight of 44 T-shirts per person, according to Karen Storry, a senior engineer with the regional district.

Much of that waste can be re-purposed. For a fourth year, Metro Vancouver is rolling out its Think Thrice Campaign to encourage residents to reduce how much clothing they buy, repair what they have, and donate instead of throwing away.

Storry says people might not know they can recycle even badly damaged clothes.

Across the region there are over 40 facilities collecting clothing that is ripped, stained, or worn out, according to the Metro Vancouver Recycles database, which has a map and lists drop-off locations.

B.C., she says, is a hub for sorter and grader facilities that sort through worn clothing — which can come from as far away as Manitoba and California — and find a new purpose for it.

What ends up in the landfill?

One of six such facilities in the province is Trans-Continental Textile Recycling in Surrey, which sifts through more than 18 tonnes of clothing that comes from collection boxes or thrift stores daily, according to founder Patricia Penrose.

Garments deemed unusable — for example, clothes with mould or covered with oil or paint — are sent to the landfill. They also include shoes with holes — though a single shoe without a hole can be recycled and potentially matched with another odd shoe in different markets.

Penrose encourages British Columbians to recycle as much as possible.

“The most important thing is not to throw anything away and to send it to a facility where the most items can be made use of,” she said.

Of the material the facility salvages, over 900 tonnes a year is turned into wiping rags and sold across Canada, Penrose says.

But most of the textiles are sold to markets abroad. They include old winter jackets, the insulation of which is cleaned and recycled in eastern Europe. The fabrics of sweaters with holes are separated and also re-purposed abroad, Penrose says.

‘Shifting the problem over to other folks’

“We’re really just shifting the problem over to other folks,” said Sara Blenkhorn, who works with the Leverage Lab to help businesses improve their social and environmental impact.

In recent years there have been concerns that Canada is dumping unwanted clothes in developing countries, leading to pollution and harming local textile industries, according to a 2021 report commissioned by Environment and Climate Change Canada.

Blenkhorn says the technology to break down and recycle used textiles in Canada “just doesn’t exist here yet,” with no large-scale resources to de-button and de-zipper clothing and then mechanically or chemically break down the fibres and re-purpose them.

“That machinery is expensive. And then the processes take some time,” she said.

Penrose says she would “love” to sell clothing to local facilities that could process it, but neither the infrastructure nor demand is there.

Consumer habits and business practices will also have to change to reduce textile waste.

Blenkhorn also says retailers could host take-back programs, where they accept used clothing and turn it into new products.

“I think all of those forces will put pressure on growing our ability here locally to have viable markets for that apparel, so we don’t have to send it away,” she said.