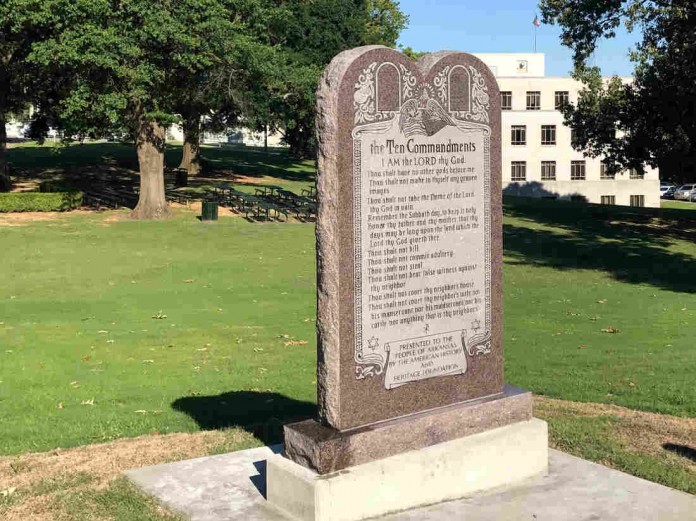 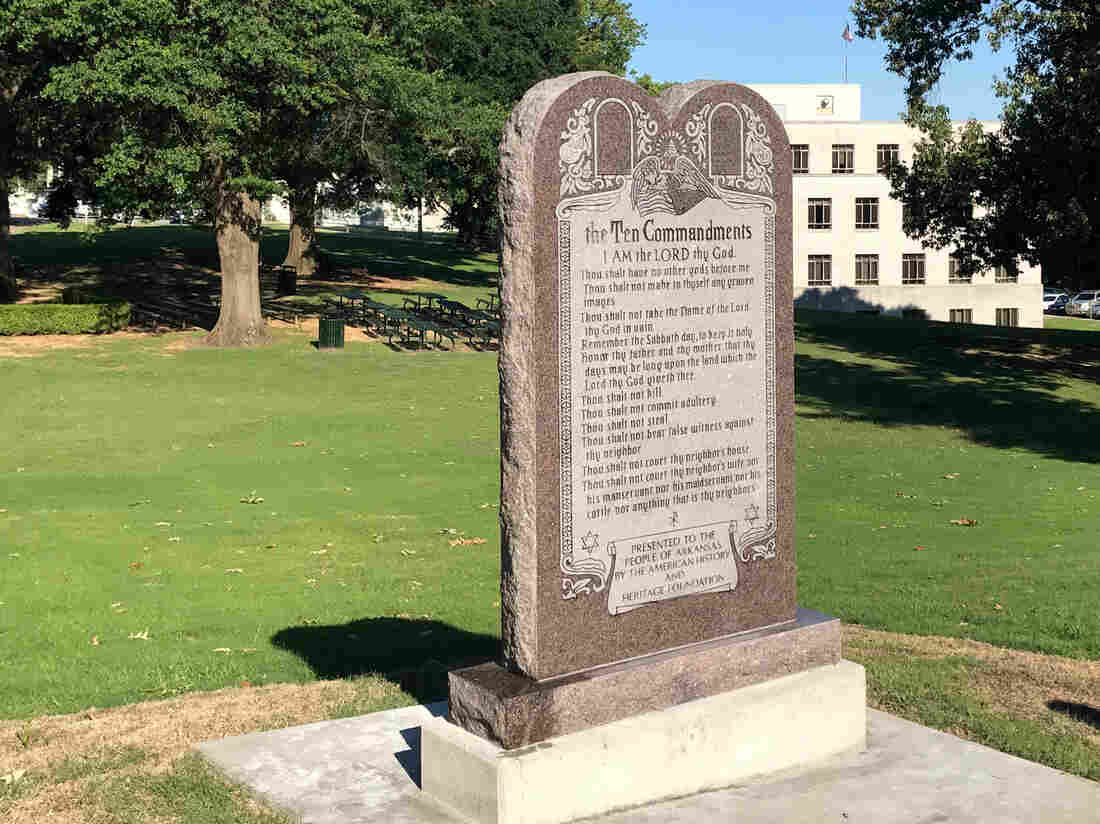 Little Rock, Ark., is the latest front in the ongoing battle over Ten Commandments monuments on government property.

A six-foot-tall granite monument of the Commandments was installed on the grounds of the Arkansas State Capitol on Tuesday, flanked by the state senator who raised the money to pay for it and sponsored the legislation that required it.

“We have a beautiful Capitol grounds but we did not have a monument that actually honored the historical moral foundation of law,” Republican Sen. Jason Rapert told reporters. “And today we have now, through the support of people all over the country, mostly from Arkansas, been able to erect this monument at zero taxpayer expense.”

In 2015, the Arkansas Legislature passed Rapert-sponsored legislation that paved the way for the monument.

The Ten Commandments Monument Display Act requires the Secretary of State to permit and arrange for the monument. The law cites the Supreme Court’s 2005 Van Orden v. Perry decision, which allowed the Texas State Capitol to keep its Ten Commandments monument in place.

Nonetheless, the Arkansas law anticipates legal challenges: “In the event that the legality or constitutionality of the monument … is challenged in a court of law,” it says, the Attorney General may either “prepare and present a legal defense of the monument” or hire Liberty Institute to do so.

The American Heritage and History Foundation, an organization founded by Rapert, raised the money to pay for the monument. Rapert says he is on the foundation’s board and that he makes no money from it.

The ACLU of Arkansas says it will sue to remove the monument from the Capitol grounds.

“At a time when we do not need any more religious conflict and divisiveness in the world and in this country, it violates the First Amendment promise of religious liberty to all,” Rita Sklar, the group’s executive director, told NPR. “By placing a monument to a particular set of religious beliefs, it appears that the state enforces one particular set of beliefs over others and over no religion. And it makes people who fall into those categories — no religion or other religion — feel like second-class citizens in the state of Arkansas, which they are not.”

The monument suggests that the Commandments are the basis for American and Arkansas law, she says, even though “several of the commandments are wholly religious in nature, like ‘having no other gods before me,’ or keeping the Sabbath. Those have no purpose in U.S. or Arkansas law.”

Rapert has made headlines with his legislation before. In 2013, he sponsored the country’s strictest abortion law, which was eventually blocked by a federal appeals court. And earlier this year, he sponsored a bill to take Bill and Hillary Clinton’s names off the Little Rock airport.

Does Rapert believe in a separation of church and state?

“We have freedom of religion, that’s not freedom from religion,” he tells NPR. “You have to remember, the State of Arkansas, through a legal process, said that they want to have a monument to the Ten Commandments for the Capitol grounds.”

He calls the expected lawsuit by the ACLU “foolhardy.”

“The ACLU has a history of what I call frivolous lawsuits. It’s very sad in this day and time,” he says. “The Supreme Court of the United States has said these monuments don’t violate the Establishment Clause. This is America, and if they want to spend their money on this, they can do that. But it’s not the right thing to do.”

Sklar says the ACLU of Arkansas has won similar battles over the Ten Commandments in classrooms and courtrooms, and she says the Van Orden decision doesn’t protect the new monument at the state capitol, either.

The court distinguishes between longstanding, historically significant buildings, she says, “that have had religious monuments or symbols for decades and decades, which is the case in Texas, and erecting a completely new religiously divisive monument [like that at] the Arkansas State Capitol. The Court sees a huge difference between the two, and so do we.”

And she says that it’s Arkansas lawmakers who are wasting money – taxpayer money. “It cost the state hundreds of thousands of dollars when we challenged their abortion ban. Talk about foolhardy.”

Sklar says the Ten Commandments monument does what she believes Rapert and others intend: to assert “that Christianity in part has some special place in American tradition, has a higher place, has a more important role.”

“It does what it sets out to do, which is to get people from other religions to feel unwanted and unequal.”