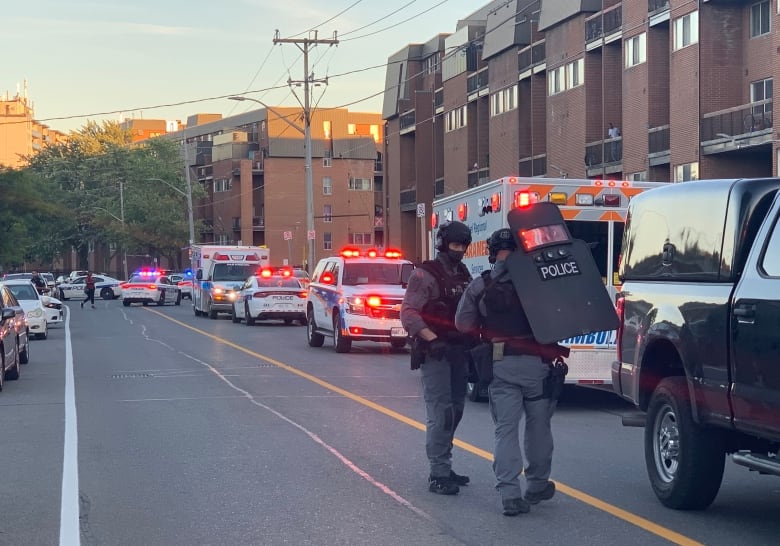 A 17-year-old boy is dead and five others were wounded after gunfire erupted in Mississauga on Saturday evening, Peel Regional Police say.

Speaking to reporters from the scene Saturday night, Chief Chris McCord said among those injured are a 13-year-old, a 16-year-old, two 17-year-olds and a woman in her 50s. One of those victims is in life-threatening condition, while the others are being treated for non-life-threatening injuries, McCord said.

Police are now searching for what they believe are “multiple individuals armed with semi-automatic weapons,” who fled from the area after the shooting.

“There is a concern for public safety,” McCord said, though he added police have combed the area and don’t have reason to believe the suspects will return.

Peel Regional Police were called to an apartment building on Darcel Avenue near Morning Star Drive and Goreway Drive at 6:22 p.m. ET. Multiple vehicles with bullet holes could be seen in the area.

There was a heavy police presence in the area for much of the evening as officers combed through the building to rule out any other victims or possible suspects.

“It is a large scene and a very dynamic investigation,” police spokesperson Iryna Yashnyk told reporters earlier in the evening.

Police had several units in the area Saturday night, including tactical and K9 teams. Investigators spoke with several witnesses and are canvassing for video.

Police are working on notifying the victim’s next of kin and say the homicide bureau has been notified.