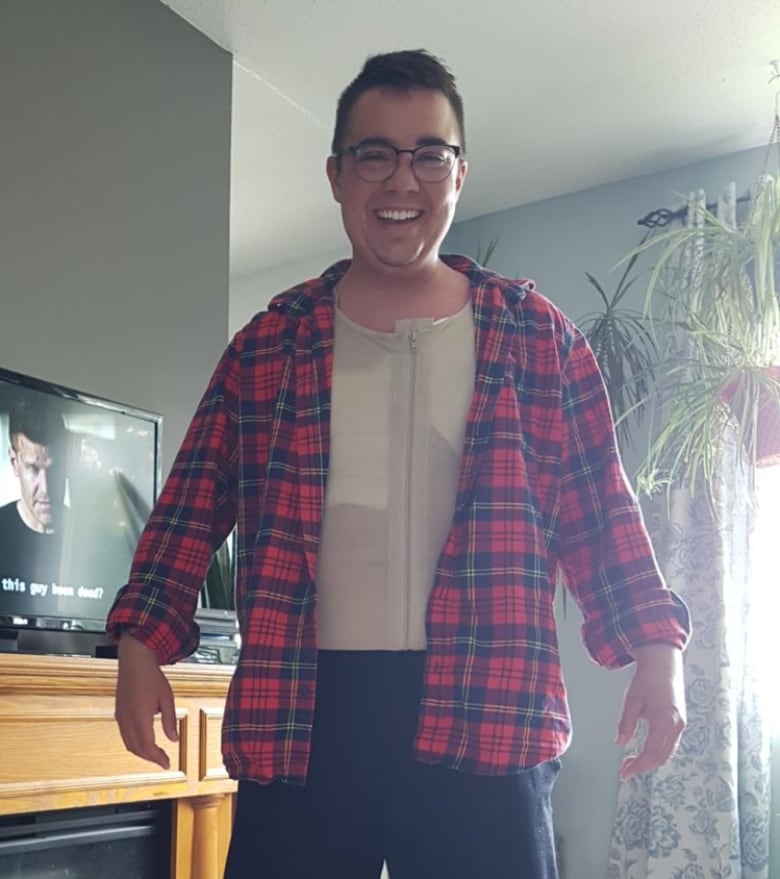 Michael Megenbir was someone who generally kept his personal life separate from work. That is, until one June day in 2017.

Sitting among his fellow educators in the library of the Regina school where he worked at the time, the intensive support teacher rose at the year-end staff meeting to announce to his colleagues that he’s transgender.

“I really love and respect all of you, and I think you all feel the same way about me,” Megenbir, now 37, remembered saying.

He went on to tell them that when they return to work in the fall, he’d be changing his name to Michael and using he/him pronouns.

Megenbir’s palms were sweaty as he assessed the room.

“I remember looking out and seeing the faces, focusing in on a couple of the staff who I had become really close with and just watching them smile,” he said.

Then came the applause.

“It was honestly a little overwhelming, but in a good way,” Megenbir said. “It gave me that little boost of confidence and it just let me know that I was doing the right thing.”

Allison Boulanger, who knew Megenbir as a friend and colleague for years before his transition, remembers smiling and clapping in the crowd.

“When he got up to tell the staff, you could tell this was something that was right for him and it was how he needed to live his life — and live his life truthfully,” she remembered thinking.

Megenbir was reassured he had the support of his co-workers and school administration; what he couldn’t predict was how his openness about his identity would inspire his students and colleagues to live their truths, and pave the way for more conversations around inclusion in schools.

Fast forward to the new school year that fall, and Megenbir said it was a welcome surprise to notice there was “very little change” in how people treated him. He joked it was almost as though his colleagues practised over the summer.

“It was kind of business as usual,” he said with a chuckle.

Megenbir noted that seemingly little things, like the use of his pronouns and new name, made the biggest impact on feeling accepted. And on the off-chance people messed up, they were quick to correct themselves and didn’t draw attention to it.

“It was the happiest he’d been,” Boulanger remembered noticing. “You could tell that he felt like himself.”

The next year, Megenbir had long-awaited top surgery — a mastectomy and chest-sculpting procedure. “It was the first time in my life since I was probably nine or 10 years old that I felt comfortable in my own skin,” he said.

When the opportunity arose for Megenbir to help start a gay-straight alliance (GSA) at the school, it naturally sparked conversations about his gender identity with students.

On the first day of the GSA, when he got everyone to introduce themselves, he said, “I’m excited to be here and to be a part of the GSA because I am transgender” — something that surprised a few students.

All that I hope my students take away from any encounter with me personally is that it’s OK to be who you are.– Michael Megenbir

Some kids told Megenbir he was the first person in the LGBTQ community they had ever met. That’s the moment he knew sharing a piece of who he was added a layer of support for those children who needed it.

“All that I hope my students take away from any encounter with me personally is that it’s OK to be who you are,” he said. “As an educator, if that’s the only thing I ever teach a student, I will have felt like I did my job.”

As a teacher outside the LGBTQ community, Boulanger said having Megenbir as a resource for students across the entire school proved invaluable.

“I’d always tell students, ‘I’m here if you want to talk to me,’ but Mike was just the person they gravitated towards because he just knows what’s going on and how they’re feeling,” she said. “He just has a way of making them feel a little bit more understood.”

Looking back on his childhood in rural Saskatchewan, Megenbir wonders how different his gender identity journey might have been had he had a teacher who was open about being queer, or resources like a GSA.

He thinks it might not have taken him until he was 30 to live out his truth had he had those positive influences.

“It was really hard to feel that you were different, and also be made to feel like there was something wrong with you because of that,” he said.

He points to a picture of himself in a dress at his parents’ wedding as an example.

“As a kid, I never liked dressing up, especially in dresses,” he said. “This picture is how my family explains who I am and have always been: a little goofy, dancing to my own drum and not caring what anyone else thinks about me.

LGBTQ inclusion in the classroom

Talking about LGBTQ representation among teachers is important, too, said Raylee Perkins, a teacher-librarian at another Regina school.

“Whatever a person’s coming out story is, it’s often sad and steeped in trauma,” said Perkins. “Seeing someone like Mike, who’s happy and radiates this love and joy, it demonstrates that you can also have that joy in your future — and you don’t always see that in books or on TV.”

That’s in part why Perkins is open about identifying as queer at school. But that also means the advocacy work to promote LGBTQ inclusion in the classroom tends to fall on her shoulders, despite the best efforts of allies around her.

According to the Saskatchewan Ministry of Education’s website, the government “is committed to ensuring schools are safe and inclusive environments for all students, including those who identify as gender and/or sexually diverse.”

That includes encouraging school divisions to develop policies specifically to include groups, like GSAs, to create safe spaces for LGBTQ students and their allies. The province’s Deepening the Discussion: Gender and Sexual Diversity framework from 2015 also contains curriculum for teachers and school administrators.

While LGBTQ inclusion exists under the curriculum, Boulanger said there are still some teachers who don’t cover it in their classrooms.

“If they can start talking about it and talk to people who identify as LGBTQ, that might help them to realize that it’s not something to fear; it’s something to learn about and to grow,” she said.

To make sure her classroom or library is visibly inclusive to transgender people, Perkins hangs posters that delineate the room as a safe space, and she wears rainbow pins and pronoun buttons.

“For some kids, they’ll never notice those little details, but for the kids who need it, they will notice even the smallest detail,” she said.

Perkins also makes a point of not shying away from answering tough questions and having more complex talks with her students.

Boulanger agreed, saying that on top of the curriculum around diversity and identity, she finds informal chats with her students to be the most impactful.

Looking back on Megenbir’s positive “coming out story” at work, Perkins said it has created a safe place for other LGBTQ people to do the same.

“Both [students and teachers] can look to him as a role model or for hope — whatever that is for them,” she said. “The more we can see it and talk about it and not be afraid of those conversations and face them head-on, I think the more progress we’ll make.”