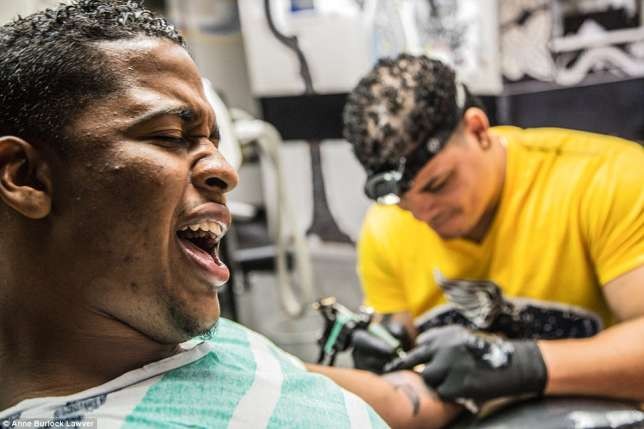 Certain tattoo inks can be toxic and contain compounds that have the potential to cause cancer.

Deciding on whether or not you should get a tattoo and what tattoo you want to get are usually the hardest parts of the process of getting ink on your skin, but nobody ever tells you that getting a tattoo can give you skin cancer.

Tattoos have become more common in recent years, mostly among millennials. For some, it is a mark of identity; for others, it is a way of immortalising memories and people; others just want to keep up with the trend and look cool.

Dami, a marketing professional, who has four tattoos says its all about self-expression. “Tattoos are big in Nigeria now because of the urban movement, urban culture, body art is an integral part of it of course,” he tells Pulse.

Either way, it’s easy to focus on the beautiful patterns on your skin and forget the health implications.

According to a 2012 Danish Environmental Protection Agency study, certain tattoo inks can be toxic and contain compounds that have the potential to cause cancer.

play Wizkid is just one of many Nigerian musicians and enetertainers who wear tattoos. (Instagram (@wizkidayo))

Years ago, a study sponsored by the Australian government found that one in five of the inks they tested contained chemicals that could cause cancer.

The scary thing is that cancer-causing chemicals were found in 83 percent of black ink — which anyone knows to be the most popular colour for tattoos.

Imagine sitting in a tattoo parlour and asking the artist what chemicals are in his ink. That would be weird to say the least, because nobody cares about ink or what type is used.

But as things stand, you may need to consider knowing more about these things.

In 2013, The European Society of Tattoo and Pigment Research was established with a mission of educating the public about the “fundamental facts about tattooing” which many millennials ignore.

Barium, Copper, Mercury and other harmful components were found in the inks tested.

Tattoos are made by injecting the ink beneath a layer of the skin where it remains under the skin decomposed or the ink is removed through laser surgery.

Where the ink has cancer-causing chemicals, also called carcinogens, the skin can easily be infected.

In Nigeria, the risk is much higher.

In these countries, tattoo culture is recognised and regulated. Tattoo parlours need a license to operate and artists have to learn and be apprentices before they are licensed to draw theirs.

Despite all of these, many persons are put at risk of skin cancer from bad ink that many artists use.

That’s not even the case here. Anyone with access to ink and a tattoo gun can open an Instagram profile and a small sleazy store and begin to refer to himself as a tattoo artist.

There is no regulation, nobody checking the standards which are why anyone can bring any black coloured liquid and imprint it on your skin.

This lack of regulation is largely down to the fact that tattoos are seen as immoral and a vice in our society, particularly by the older generation.

Like everything that they barely understand, they are comfortable to keep their hands off and let it fester.

Some would even go as far as implying that the incidence of skin cancer is payback from God after he asked his people not to make markings on their skin.

Christians are quick to point to Leviticus 19:28, “Do not cut your bodies for the dead or put tattoo marks on yourselves. I am the LORD” as their main point in the debate against tattoos.

“To a large extent it influences the perception people have about you,” says Dami, a marketing professional who has four tattoos.

Nigerian parents are inclined to believe their children have crossed over to the dark side when they come home with a fresh patch of ink.

play This tattoo was made in memory of a late father. (Instagram (@tattoosbyena))

“To my own understanding I believe God was specifically talking to the people of Israelites what to do and what not to do because of the pagan and ritual practices going on as at that time” says Ena Osifo, a tattoo artist, in reference to the verse in Leviticus.

“If you look at Leviticus 19: 27, it says, do not trim the corners of your beards or cut your hair… but today Christians cut their hair and don’t count it as a sin” he adds.

The problem is that tattoos can give you skin cancer, and with so many young people getting inked, it is no longer a religious or a fashion problem, it is a health risk.

You would also do well to exercise care when getting inked.

Getting a tattoo by the roadside in Ikeja after a day bar-hopping and getting drunk might seems like a good idea for a television show but it won’t be funny when you get older and that one indiscretion brings your entire life crashing down.

Skin cancer is not the only risk that you face from drawing tattoos. Nigerian tattoo artistes are infamous for using the same tools for as long as they can.

Sharing tattoo needles with other people can put you at risk of contracting HIV or Hepatitis which is 10 times more contagious than AIDS.

play Many tattoo artists tend to use guns and other apparatus without proper sterilizing. (The Three Wise Monkeys)

There was also a case of a woman who has cervical cancer due to tattoo ink which had settled in her body and triggered the terminal disease.

As tattoo culture grows in Nigeria, it is only rational that we involve safer practices. A good first step would to get rid of roadside tattoo artists, especially the notorious ring near Computer Village in Ikeja.

Those of us on the other end of the fence must also exercise care. Do not visit tattoo parlours that you cannot vouch for and ask your artist to change his needle.

Or you could just abstain. As extreme as it sounds, this is probably the safest option.

Statistics suggest that one in four people end up regretting their tattoos but that’s much better than getting terminally ill over a beautiful drawing.