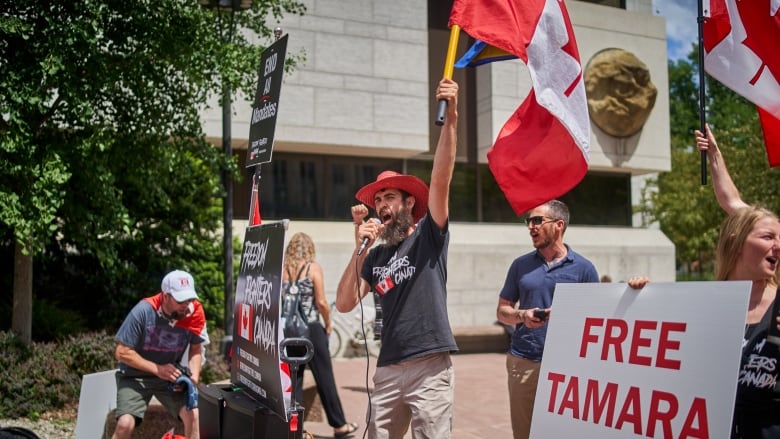 Freedom convoy leader Tamara Lich’s bail has been revoked for violating the conditions of her release when she attended an awards gala in Toronto and had contact with another convoy organizer.

Justice of the peace Paul Harris announced his decision in an Ontario Court of Justice courtroom in Ottawa on Friday afternoon, with Lich present in person.

Her detention is necessary “to maintain confidence in the administration of justice,” Harris said.

“Ms. Lich is not prepared to follow court orders and is prepared to do whatever she feels like doing,” he added.

When Lich was asked if she understood the decision she said yes, then, “thank you.”

Her next appearance is scheduled for July 14 via video.

Lich has been in jail since she was taken into custody in Medicine Hat, Alta., on June 27, after Ottawa police issued a Canada-wide warrant for her arrest.

Speaking to reporters after the decision, defence lawyer Lawrence Greenspon said he was “extremely disappointed,” and that the defence will seek a bail review in the Superior Court of Ontario “as quickly as possible.”

He said Lich was “understandably disappointed with the result, and wanting to regain her freedom.”

Supporters calling “free Tamara” outside the courthouse. <a href=”https://t.co/2QYgr2NayI”>pic.twitter.com/2QYgr2NayI</a>

Supporters holding Canadian flags chanted “Free Tamara,” in front of the courthouse after the decision.

Zou Wang called Lich a hero and compared COVID-19 lockdowns in China to conditions in Canada. Another woman was visibly upset and said she was heartbroken.

Defence lawyer Lawrence Greenspon made a brief appearance outside. Here’s the whole thing.<br><br>Says he’s “extremely disappointed,” has received instructions to bring a bail review ASAP.<br><br>Says Lich is “understandably disappointed.” <a href=”https://twitter.com/hashtag/ottnews?src=hash&amp;ref_src=twsrc%5Etfw”>#ottnews</a> <a href=”https://t.co/jpc5fiY8K4″>pic.twitter.com/jpc5fiY8K4</a>

Lich appeared virtually in an Ottawa courtroom Tuesday for her fourth bail hearing since she was first arrested in February.

He argued Lich should be detained, adding the judge who released her on bail gave her a “gift … she kicks in the mouth.”

But Greenspon said Lich’s actions were “minimalist at worst” and didn’t amount to a violation, so she should be released again with conditions.

Court was also shown a text message from Lich to Chris Barber, another convoy organizer, sent during the first few days of the convoy and later obtained through a police search of his cellphone.

“Awesome. Command Centre just called. Can you head over there with me soon,” reads the text sent on Jan. 30. “They have a strategy to gridlock the city. I don’t want to make those decisions on my own.”

Harris said Friday that the court had been provided with “concrete evidence” of Lich’s decision-making role during the protest that caused “chaos” and left the city vulnerable.

While the protest is over now, “Ms. Lich’s involvement, in this court’s opinion, continues to pose a risk for the protection and safety of the public,” Harris said, adding she will have to answer for that involvement at some point.

One of Lich’s bail conditions states she cannot contact or communicate in any way, by physical, electronic or any other means, with a list of people associated with the convoy — including Marazzo — except through counsel or in the presence of counsel.

That wording was dissected during the hearing earlier this week, with Greenspon saying it refers to communication, rather than physical contact.

Harris rejected that argument in his decision, saying Lich was allowed to attend the award gala, but that permission didn’t include sitting with Marazzo or adding “fuel to the fire” by posing with him in a photo.

“Such actions most certainly erode the public’s confidence in the administration of justice,” he said.

It was “absolutely ridiculous” for Lich’s defence to argue that the presence of lawyers at the ceremony somehow circumvented the bail condition, Harris said.

Her legal teams also didn’t provide any evidence counsel actually were there for the photo and video, the justice of the peace added.

“Ms. Lich has chosen to exercise her freedom by not following the court-ordered non-contact condition … she does so in such a fashion to flaunt her actions under the misguided excuse of having her lawyer present.”