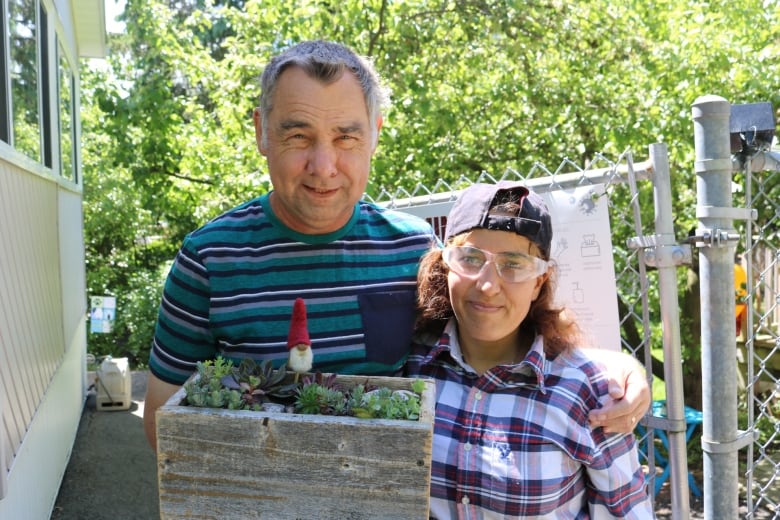 If all of your friends look like you, talk like you and are the same age as you, you can have a
good life.

But you’re missing out on experiences and perspective that could make your world much richer.

On the surface, the two Saint John residents may not seem like two people destined to be best friends.

Standing, 57, is a born-and-raised New Brunswicker who recently retired due to medical reasons.

Aldekas, 29, fled Syria several years ago during the country’s civil war, arriving first in Lebanon, then in London, Ont. She eventually landed in Saint John in 2019.

Life in a war zone took its toll. “After war, very dangerous. Shelling, not safe. Always worry, many people die. Not safe. Very difficult,” she said.

It wasn’t much easier when she arrived on Canada’s East Coast with no job, no friends — and no English or French.

She had left her younger brother, Bakir, behind in Lebanon.

“I don’t have family here. This is very difficult for me,” she said.

Above anything else, Aldekas wanted to work. About a year ago, she walked into Jaco’s, a pizza restaurant in north-end Saint John, where Standing and his friends hold an informal coffee club.

“She did not know any English, and she walked in and said, ‘Hire me. I need a job,'” Standing recalled.

Fortunately, restaurant owner Jaco Khoury spoke Arabic. After Aldekas explained her situation, Khoury asked the group if she could sit down with them, to help her learn English.

Inviting a total stranger into their men’s coffee club was “not a normal thing at all” for Standing and his friends. But he said he admired the “drive” he saw in Aldekas.

“I saw somebody who has a plan to do something. The plan is to make a life for herself, and bring her brother here,” Standing said. “She endeared herself to us.”

Giving her the tools

From conversations at the pizza shop, their friendship moved to Standing’s home a few blocks away.

Standing, who is on dialysis for kidney disease, needed help with certain tasks. He and his wife, Tina Jane, saw that Aldekas took an immediate interest in their odd jobs and building projects around the house.

Aldekas had done some carpentry and was interested in learning more, but power tools were a barrier for her. She had never used them before.

Standing, a hobby carpenter with an extensive collection of tools, decided to teach her.

In Syria, carpentry is a man’s job, Aldekas said. “Woman — job for her teacher, job for doctor, her cook for children. Also engineer. Anything. But no carpenter.”

The learning turned out to be a two-way street.

As Aldekas learned carpentry, she introduced Kevin and Tina Jane to Syrian food and shared with them her passion for vegetable gardening. When she got a community garden plot, she “dragged me into that, too,” Standing joked.

As the pair worked together over several months, Aldekas gained more confidence with the tools. She enjoys the precision the work requires.

“You must get everything correct, for no mistake,” she said. “I work by myself. I learn.”

So far, Aldekas has helped to build a dog kennel, small woodworking projects and planters for the community garden.

Their latest project is building and selling window boxes out of reclaimed cedar, with all of the proceeds going toward a fund to bring Aldekas’s brother safely to Canada.

A fundraiser is also planned next month at Saint John’s Harbour Church, where the Standings are part of the congregation.

“I was a Muslim but am now Christian,” Aldekas said. “This is my decision. Because I am here free in Canada, I can do what I need. I can choose what I need.”

In Syria, she said, she wouldn’t have been able to change her religion.

“Canadian help me so much — make me feeling safe,” she said.

Apart from bringing her brother to New Brunswick, Aldekas said she has two other big dreams.

The first, she said, is to stay in Saint John. “Because I like Saint John. People here very nice, kind.”

Her second goal is to find a job that will help her advance her carpentry skills. “Hopefully I have job at Home Depot,” she said.

This week marks 10 years since the conflict in Syria began. Approximately 75,000 Syrian refugees have since settled in Canada, and many of those people found a home in Toronto. Natalie Kalata has some of their stories. 3:41

Whatever the future holds for Aldekas, Standing said she’ll always have “a special place” in his heart.

“I see someone who is willing to challenge expected norms, from where she came from, and do something better for herself. I like somebody like that,” he said.

He calls learning from one another an “experience.”

“Sometimes you have to get out of your safety zone and try something new — and you will be rewarded.”