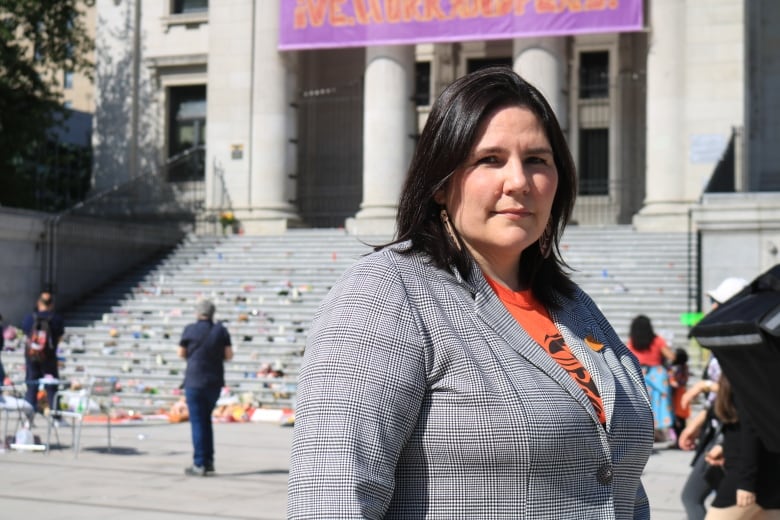 Taking in the sight of hundreds of shoes on the steps of the Vancouver Art Gallery, the magnitude of what was found buried beneath the former Kamloops Indian Residential School grounds isn’t lost on Carmen Lansdowne.

She’s a member of B.C.’s Heiltsuk First Nation, and her grandparents were among those taken away from their families decades ago.

“I have flashes of anger and frustration, combined with grief and sadness and numbness,” she told CBC News on Monday.

“I don’t think I could be an ordained minister in the United Church of Canada if we hadn’t been honest in our role,” she said.

The Tk’emlúps te Secwépemc First Nation in B.C. said last Thursday that preliminary findings from a survey of the grounds at the former residential school in Kamloops revealed the remains of 215 children — some as young as three years old.

In the wake of the find, survivors, Indigenous leaders and advocates, and faith leaders are calling on the Roman Catholic Church to apologize and take responsibility for the atrocities committed against children, families and communities in the residential school system.

“As an Indigenous ordained minister, it deeply pains me to see our ecumenical partners not do that work,” said Lansdowne.

The Roman Catholic Church was responsible for operating up to 70 per cent of residential schools, according to the Indian Residential School Survivors Society (IRSSS). United, Anglican and Presbyterian churches were among those operating the remainder.

In the years since, the Roman Catholic Church is the only one that hasn’t made a formal apology.

“They have caused the greatest harm in many of our communities,” said Angela White, IRSSS executive director.

An apology for the Catholic Church’s role in the residential school system is also one of the calls to action from the Truth and Reconcilation Commission of Canada (TRC).

The TRC has confirmed the names of more than 4,000 children who died at residential schools and there are many more who have not been identified or are missing.

In response to the announcement of the discovery of the human remains, Richard Gagnon, the president of the Canadian Conference of Catholic Bishops, issued a statement expressing sorrow for the lives lost.

“Honouring the dignity of the lost little ones demands that the truth be brought to light,” he wrote.

There was a similar message by Vancouver Archbishop J. Michael Miller, who, speaking for the church, said “we pledge to do whatever we can to heal that suffering.”

Carolyn Bennett says the government will engage with the Indigenous community to find a culturally appropriate approach to identifying the children’s remains and commemorating them. 0:53

But critics say there’s one key word missing from those statements: “Sorry.”

Rev. Michael Coren, an Anglican priest and author, is among those who have been the most vocal following the Kamloops discovery, penning a column directed at the Catholic Church.

“Every church, virtually every church in Canada, was involved in this catastrophe,” he told host Stephen Quinn on CBC’s The Early Edition. “And that should never be denied.”

“[The Roman Catholic Church] simply will not make a commitment to its direct involvement in these atrocities because, I would argue, it’s terrified of the financial and legal consequences if it does,” he said.

The survivors society has issued calls to action, similar to the TRC, aimed at both the federal government and the Catholic Church. That includes an acknowledgement from the Pope.

When it comes to healing, Angela White says it starts with “sorry,” but true reconciliation requires an ongoing dialogue.

“We should have them be accountable to providing resources, whether it’s money or counselling, for the damage that they’ve done, so the healing can continue,” she said.

“We shouldn’t have to be figuring out how we’re going to heal, when they’re the ones that did the damage.”

With files from CBC’s The Early Edition