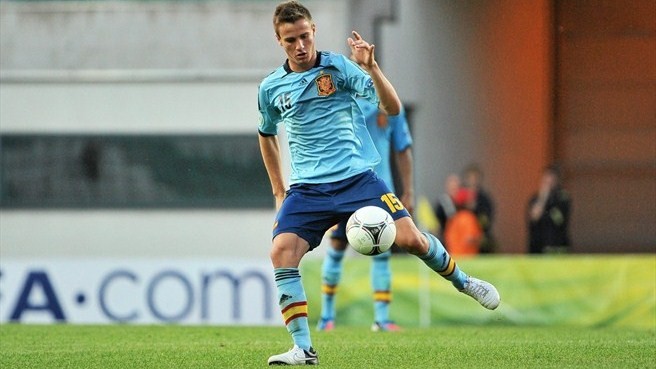 Highlights of the Under-21 European Championships semi-final between Spain and Italy.

Spain are through to the European U21 Championship final against Germany after Saul Niguez’s hat-trick gave them a 3-1 win over Italy.

Niguez opened the scoring in the second half (53) with a fine touch and finish on the edge of the box, before Italy’s Roberto Gagliardini was sent off for a second booking moments later.

Despite a lack of chances in the first half, the Krakow crowd were treated to an entertaining 45 minutes, with Italy going close through Andrea Petanga’s effort from an acute angle, saved by Kepa Arrizabalaga.

Spain broke the deadlock eight minutes after the break through Saul, who received Daniel Ceballos’ ball in a central area, controlled superbly and stroked into the far corner past Gianluigi Donnarumma.

Italy’s task seemed impossible a few minutes later as Gagliardini was shown a second yellow for fouling Ceballos, having unnecessarily brought down Gerard Deulofeu in the first half. 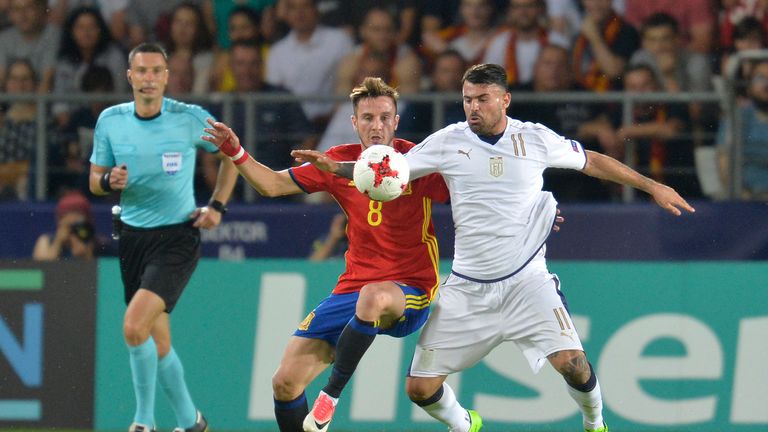 But Italy equalised against the run of play, with Bernardeschi’s fierce effort from 20 yards deflecting off the foot of Jesus Vallejo and past Kepa.

Spain regained their lead on 65 minutes through one of the goals of the tournament from Saul, finding the top left corner with little backlift from distance, leaving Donnarumma with no chance.

And he made it 3-1 with 16 minutes remaining, stroking home Marco Asensio’s cut-back from 15 yards into the bottom left corner.

Man of the match – Saul Niguez

Who else? When you can take a player valued at £55m to an Under-21 championship, you know you’re standing in good stead.

Saul’s first was a delight, trapping the ball and finding the corner past the highly-rated Donnarumma, but his second was world class. Out of nowhere, he struck home an unstoppable effort from range, leaving the neutrals drooling.

He’ll be linked here, there and everywhere again throughout the next few transfer windows, and with the 22-year-old on top form in Friday’s final, Spain will be very difficult to stop.

Italy head home after failing to make the final for a seventh straight tournament, while Spain face Germany in Krakow on Friday evening, live on Sky Sports.